Lewis Carrol, born Charles Lutwidge Dodgson, was a mathematician with an innate sense of order and logic, colored with his absurd observations of society around him. Dodgson was a prolific writer of original fiction, including his popular children’s stories, but he also wrote essays, political pamphlets, poetry and mathematical textbooks. He was a mathematical lecturer and a Deacon at Christ Church. Three years before Alice’s Adventures in Wonderland was published, Reverend Dodgson took a rowing trip on the Isis river near Oxford with the three young children of Christ Church Dean Henry Liddel. During this journey, he made up a impromptu story about a bored little girl named Alice and entertained the children as he rowed. Afterward, ten year old Alice Liddel begged him to write down the story for her and the next day Dodgson began to work on the manuscript. This first draft of Alice in Wonderland has been lost.

On 26 November 1864, Reverend Dodgson gifted Alice Liddel a handwritten manuscript of Alice’s Adventures Under Ground, with illustrations by Dodgson himself, fulfilling his promise to her. He dedicated the novel as “A Christmas Gift to a Dear Child in Memory of a Summer’s Day”. It is an earlier draft of the final version of the novel. Once Dodgson finished the final version and allowed the children of his friends to read it and gained their positive responses, he approached John Tenniel to illustrate the book. He told the artist it was a novel beloved by children based on these informal readings. The novel’s first print run of 2000 copies in 1865 was held back due to Tenniel’s objections of the print quality. Dodgson switched to a New York publishing house where the print run sold out. Over time, the novel gained in popularity and is now considered a classic of the literary nonsense genre and it has not been out of print since. Sir John Tenniel is best known as an illustrator for his work in this and other Lewis Carrol books.

Alice’s Adventures in Wonderland begins on a summer day while Alice and her older sister are sitting on a river bank. Alice’s sister is reading a book and Alice noticed that the book didn’t have any pictures, which made the little girl lose interest in it. Being bored, Alice looks over the meadow and sees a large white rabbit running past her while looking at his pocket watch and speaking how he will be late. The rabbit disappears down a rabbit hole and Alice, being curious, follows him.

She enters a crazy world filled with fantastical characters and social situations where her innocence protects her from the insanity around her. She meets a hookah smoking caterpillar, joins in a mad tea party with the March Hare and the Hatter, is greeted by the Cheshire Cat and challenges the Queen of Hearts. As Alice begins to seek her way home, she is constantly being challenged by characters to solve word games, mathematical problems and having her own good sense questioned. A mixture of poetry, nonsense and social irony greets the young girl until she returns to the world above ground. Was it all just a fanciful dream in the end? You will have to decide.

I remember reading Alice in Wonderland for the first time as a child. It was a book that I happened to pick up in my school’s library. It was an enjoyable read and all the fantastical characters made me smile. It was not until I was older that I realized that there were layers to this novel, comments about the way that people were changing from a agricultural society into an industrial one and all the shifts in perception that this caused. As you study more about Lewis Carrol and his times, new perceptions of this book will strike you. This book has become a major influence on me as a writer. It it not just a story for the kids, it has meaning for adults as well. 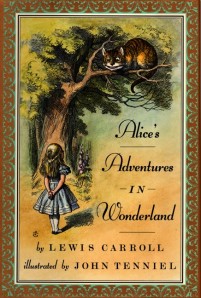 You can find a free download of Alice’s Adventures in Wonderland at Project Gutenberg. It was one of the first novels that was transcribed there.

Tenniel Illustrations for Alice in Wonderland by Sir John Tenniel is also available for free download.