I am a great lover of historical fiction novels, so when the opportunity came to interview Gabriele Wills, I was glad of the chance. I hope you’ll enjoy her interview as much as I did, here on No Wasted Ink. 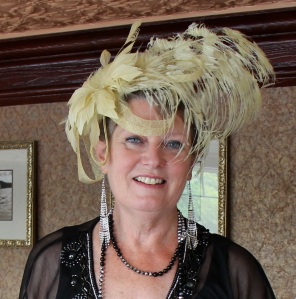 My name is Gabriele Wills. Born in Germany, I emigrated with my family to Canada when I was a young child. Always a dreamer, I’ve also been an educator, literacy co-ordinator, and website designer, but my real passion is writing. I have five historical novels in print. Married to my university sweetheart, I am also the proud mother of an accomplished daughter, with whom I just co-authored a Young Adult novel.

A few decades ago, when my husband and I moved to Ottawa for his new job, I couldn’t find a teaching position, so I decided it was the perfect opportunity to fulfill my dream of writing a novel. This was my first attempt at a story set in my favourite place, Muskoka. It wasn’t bad, and gave me lots of practice to hone my writing skills, but – fortunately – it still resides at the bottom of a storage bin.

As a child I wrote stories or made them up just to entertain myself. So I was convinced I was a writer even with that never-to-be-published first novel. I felt more confident that the second one was viable, especially after reworking it dozens of times, and went on to write a third in my spare time. When a British literary agent picked up these two books, I felt I could finally, really and truly call myself an author. I’ve been writing full time for the past eight years.

The Summer Before the Storm is set during the Age of Elegance in Muskoka, which has been the summer playground of affluent and powerful Americans as well as Canadians for well over a century. Amid the pristine, island-dotted lakes of this legendary Canadian wilderness, the young and carefree amuse themselves with glittering balls and friendly competitions.

But the summer of 1914 promises to be different when the ambitious and destitute son of a disowned heir joins his wealthy family at their summer home on Wyndwood Island. Through Jack’s introduction into the privileged life of the aristocratic Wyndhams and their social circle, he seeks opportunities and alliances to better himself, including in his schemes, his beautiful and audacious cousin, Victoria. But their charmed lives begin to unravel with the onset of the Great War, in which many are destined to become part of the “lost generation.”

This richly textured tale takes readers on an unforgettable journey from romantic moonlight cruises to the horrific sinking of the Lusitania, from regattas on the water to combat in the skies over France, from extravagant mansions to deadly trenches – from innocence to nationhood.
What inspired you to write this book?

Ever since I first discovered Muskoka as a teenager, I wanted to write about its fascinating past. I was lucky to spend time at my friend’s summer home – known as a “cottage” – which had been built by her great-grandfather in 1879. We used to dance to old gramophone records from the turn of the century, and heard stories about the wealthy cottagers who spent summers on the lakes, often owning entire islands. Many were industrialists and bankers from the U.S. who arrived by private Pullman coaches with as many as twenty-seven servants in tow. I was hooked!

I have a general idea of the storyline, but when I start writing, the characters invariably take over the plot. I’ve tried reining them in, but they will have their way! And honestly, they sometimes take the story in a completely different – but always better – direction than what I had anticipated. So for me, writing is a daily adventure, as I never quite know what they’re going to get up to next.

Because much of the novel is set in the summer of 1914, just before the outbreak of WWI – in which Canada was immediately embroiled – I wanted to have “Summer” in the title. As soon as I envisioned the war as a destructive storm, it just seemed perfect.

I’d like readers to have a deeper understanding of that cataclysmic time in world history. The generation that was young and idealistic at the outbreak of the war was decimated, but even those who survived were forever scarred by their experiences. I don’t think that anyone should ever forget their sacrifices.
One of my fans said it best with this comment: “I attended the War Museum in Ottawa, and with your characters in mind, I could see Chas flying high in his plane! Attaching a soul to the stories and pictures we looked at brought a whole new human meaning to me. It was no longer something we once learned about in school – it had a face, a life, a love, and a tragedy.”

No, but many of the events are based on real ones. I have a few aviators, for instance, so their exploits are drawn from memoirs and biographies of famous aces. Women’s roles as volunteer nurses and ambulance drivers were heavily based on real women’s often remarkable – and unsung – wartime contributions.

What authors have most influenced your life?

The Brontës, Thomas Hardy, Daphne du Maurier. My husband and I did a literary pilgrimage to Yorkshire, “Wessex”, and Cornwall as part of our honeymoon trip to England, because I wanted so much to see the evocative and inspiring landscapes where my favourite authors had lived and which they described so enticingly in their novels.

I used a photograph that my daughter had taken of an antique wooden boat that was not only typical of the era, but also one of the those actually built in Muskoka, which has a rich heritage of boat building. I thought the picture conveyed the impression of an idyllic summer day. Then I learned how to use a computer program that allowed me to design the cover.

Read widely. Keep writing, and then rewriting. Persevere. Network with other authors, because writing is a lonely profession, and connections as well as support are crucial.

To enhance your experience of The Summer Before the Storm, check out my annotations on Book Drum. Under the “Bookmarks” tab, you’ll see vintage and modern photographs and videos that illustrate various aspects of the book. You can listen to a loon call, if you’ve never heard one, and link to all the music quoted in the book.

If you enjoy my novels, please tell your friends and book clubs. And I appreciate hearing from you!

Gabriele loves to recreate an era in which she can immerse herself, by weaving compelling stories around meticulously researched facts. If you want a glimpse of her world, visit her book trailer on YouTube.