When I first learned of Ian Walkely, I was impressed by the following he has built up for his excellent thriller. He is an Australian author with a flair for executing personal goals. I am pleased to feature Ian here on No Wasted Ink.

I’m someone who likes change and experiencing new things. I wanted to be an air force pilot but a hearing loss prevented that. I didn’t have a plan B, so I’ve worked as a marketer, a social and market researcher, government policy advisor, and in business development. In 1993 I had a mid-career crisis and started my own consulting business, which I grew to an $8 million business with 35 staff. I sold my share in the business in 2008 so I could follow the dream of writing novels. I have a wife who’s a primary teacher and three grown-up children, two dogs and a cat. Life’s pretty good, really. Oh, and I’m also a very determined person when it comes to achieving goals.

Like many writers, it started with a passion for reading. In my late teens I loved to immerse myself in a Wilbur Smith adventure or Robert Ludlum thriller. I began writing novels many times over the years, but never got past about thirty pages. Finally, I cut back to 3 days a week in 2008 and began writing. Just when ebooks began to take off and publishers almost stopped looking for debut authors.

When Kirkus Reviews gave me a good review of my debut novel No Remorse.

McCloud, or Mac as they call him, is a Delta Force special operations soldier, a highly trained killer, but not the type to just blindly follow orders. He makes mistakes, and is governed by a strong loyalty to his friends. I don’t think readers want to have more invincible heroes. They want them to have faults and prejudices that get them into trouble. Mac is not great with women, for example.

The bad guy, Sheik Khalid, he’s into all kinds of evil – kidnapping, drugs, slavery, organ transplants, terrorism. Yet he’s not a Bin Laden stereotype. I wanted a bad guy who readers could hate, but not just a terrorist. Khalid has rebelled against the teachings of Islam, especially since his first love was stoned to death. He is determined to overthrow the Saudi regime, and impose a more democratic regime, which would give people more freedom. But with his type of freedom comes a heavy price.

The plotting in No Remorse is complex. It was quite tricky logistically to make it work, especially when you have seven POV characters, each with their own story, travelling between the US, Europe and the Middle East on planes and boats. I had to check, for example, that Mac could physically get to the island of Andaran in a certain time, given that he had to catch three separate flights, because there wasn’t a direct flight from London. Actually, that enabled me to write in a scene on a plane where he is confronted by a female assassin, which was a lot of fun to write. Some novelists don’t worry about that sort of detail. I know we’re writing fiction, but I like things to be realistic.

I traveled a lot in business, and I’d often buy a book at the airport bookstore. They were invariably thrillers—global conspiracies, exotic places, heroes bigger than life chasing nasty bad guys and beautiful women. I wanted to write a thriller like that. And did.

I have tried outlining, but I tend to keep diverting from any plot I try and flesh out. So I guess I have a big picture of the story, and do a little plotting, then write, then figure out whether I’m on the right track. I throw out lots of scenes. But sometimes I put them back in later, or hold them for use in a later book.

I tried fifteen titles for two years before I came up with the title, No Remorse. I wanted the title to reflect a theme. No remorse is often associated with a criminal’s attitude. However, in this case, it’s the protagonist’s attitude. He’s like Liam Neeson in Taken. Totally ready to take on the bad guys and destroy them.

The theme is that we need to destroy the evil in the world before it takes advantage of our goodwill and destroys us. And sometimes one has to follow one’s own judgment rather than accept authority at face value.

There is a great deal of research gone into the book. I traveled in the Middle East, and researched many of the elements of the plot, such as slavery, illegal organ transplants, missing nuclear material, financial banking scams and so on. So while No Remorse has the action of a James Bond thriller, it could be happening right now. That’s what my readers tell me.

In my younger days I enjoyed Wilbur Smith, Alistair Maclean and Robert Ludlum, Isaac Asimov and Philip Dick. More recently Harlan Coben, John Grisham, David Baldacci and Lee Child. I don’t think they’ve influenced my life, but I’ve enjoyed reading their stories. They’re inspiring now because I’m writing, and I can appreciate even more the wonderful imagery, and powerful characters and plots that they create.

I read a variety of genres, and even occasionally literary fiction and YA. I enjoyed The Hunger Games and Harry Potter. I forced myself to read Fifty Shades of Grey, but like many others I found it hard to understand the phenomenon’s appeal. To me it’s a romance that doesn’t deliver on its promise. I’m loving Game of Thrones at the moment. But mostly I read thrillers and crime.

I would love to have a mentor. Perhaps someone like David Morrell, who lectures in writing thrillers. But I think the sessions I attend at writers’ conferences and the courses I have done are as close as I’ll ever get. Often a writer presenting will have one pearl of wisdom that resonates for a long time.

I ran a competition among graphic design students at the Queensland College of Art, and chose the best one to work with me. Her name is Nicole Wong. Unfortunately, she has disappeared. I’m trying to find her because she expressed interest in designing my next book. So far without success. A real life mystery.

I guess I would strongly recommend to emerging writers to study the craft by attending courses and conferences. They say it takes at least five years just to learn the basics. Writing is something one can only improve on. And for self-publishing authors, I would strongly recommend paying for a professional editor. I hate seeing poorly formatted self-published books with typos and grammatical errors that give self-publishing a bad name.

My first novel took three years to write. I love getting feedback from readers who’ve enjoyed No Remorse. Fortunately, I get lots of kind words, which inspire me to continue. Writing is not an easy job. It can be lonely, and for me, anyway, there is lots of re-writing and editing before I get it right. “Emerging” writers like me need lots of four and five star reviews on Amazon to help readers become aware. So please, if you like No Remorse, write me a review (and write to me too). 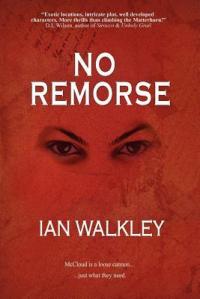