Visiting old cemeteries can lead you to discover many interesting facts of the past. Paul Ramey takes his fascination with graveyard history a few steps further which resulted in the research for his YA mystery novel. I’m pleased to have him here at No Wasted Ink. 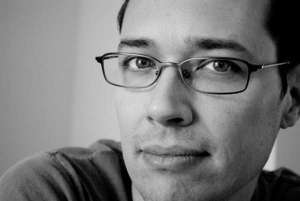 My name is Paul Ramey, and I am a writer, graphic artist, musician, and unrepentant cemetery buff. I’m a Kentucky native. I’ve also spent a few years in Providence, RI. In 2006 I moved to sunny Jacksonville, Florida, where my feet have (for the most part) been much, much warmer. Not long afterward I met my beautiful wife, Tina, and two years ago we welcomed our first child, Sofia Alafaire.

I am 45 years old, a lifelong health nut, a huge fan of Queen and Freddie Mercury, and consider Old Rasputin to be the very finest of Imperial Stout beers.

I began creating little comic magazines that I’d write, draw and staple together when I was eight years old. The creation of these zines continued and evolved all the way through college, and I credit them for being my first training ground in both writing and art, as well as marketing.

My first formal awareness that I could actually write well came about through a high school humanities teacher, who always called my style “Rameyesque.” I didn’t actually know what that meant, but it stroked my ego enough for me to eventually get a B.A. in journalism. I also had a wonderful, well-known creative writing professor during my college years (Gurney Norman of Divine Right’s Trip fame), who was especially motivating and illuminating as to possible future writing paths.

Edgar Wilde and the Lost Grimoire revolves around an eccentric teenager and local amateur tour guide named Edgar Wilde. Edgar is seldom NOT seen in Victorian garb (he’s mocked at school for wearing Victorian-era apparel there, including top hat), and needless to say, he doesn’t quite fit in with his peers. In contrast, he connects easily with many of the adults around town, whom he finds closer to being his intellectual equal.

In an effort to make his amateur cemetery tours more enticing, he often researches old files at the town library looking for interesting facts. As the novel begins, Edgar has stumbled onto a strange mystery about a local public figure from hundreds of years ago. This leads quickly to hints of a centuries-old secret; a forgotten history that some in the town would rather stay hidden. The story is chock-full of cemetery clues, rumors of witches, and a legendary lost book of spells, as well as a number of memorable, enjoyable characters.

As a genre, Edgar Wilde and the Lost Grimoire fits in well at the older end of the young-adult category, but I believe adults will also find it to be a very entertaining mystery.

I have a passion for old cemeteries – the history, the iconography. To me, they’re really beautiful outside museums. So I wanted to write a novel that communicated this fascination, and to educate the reader a bit concerning cemetery history, symbolism and even various materials used to make the markers. Edgar Wilde and the Lost Grimoire goes to great lengths to weave these aspects into the plot.

In an interesting twist, the book was also inspired by my new daughter, Sofia. I’d been working on a number of other creative projects, almost all of which were completely sidelined when the new baby arrived. The music and art both required huge amounts of solid time – 3 or 4 hours at a sitting – which was just impossible. But with writing I found that it was easy to step away often when parental duties required, and then return when I had another 10 or 15 minutes. In fact, the stepping away and returning every so often became an important part of the process, as it gave me a constant fresh perspective.

So the book project quickly became my creative passion, and a book now exists where almost certainly none would have had my daughter never shown up. I may never have even tried to write a novel if I’d continued to focus on all those other shelved projects. So, thank you, Sofia! Understandably, this book is dedicated to her.

From the beginning I’d considered this novel as the possible first of a series. I was very inspired by the “Harry Potter and the…” format, and wanted to create a similar structure of continuity that people would recognize instantly. The “Lost Grimoire” refers to the core mystery of the book, which is a legendary lost book of spells.

It is loosely based on a few places I’ve lived, and some people I’ve encountered, but no particular person or place. In fact, the location – St. Edmund Island, Massachusetts – is a place I invented. So don’t go looking for it!

Steve Berry and Dan Brown have both had a huge impact on me in terms of structuring a mystery and using existing historical facts in thrilling new ways. The art of connecting the dots is a craft I hope I can use to make the Edgar Wilde books especially enjoyable. Stephen King, as well, for his exceptional wordcraft.

I am actually the graphic designer as well as the author. As it happens, I’m a graphic designer by trade, so I have a real advantage in visualizing and creating the promotional elements of my stories. As it happened, I came up with the design for the cover quite early on in the writing process, and it helped greatly in visualizing the path of the story. I often work this way; it helps to have a mock-up of your final product so that you have something relatively solid to aim for. People make fun of me sometimes for creating mockups of my “end product” before doing the actual hard work of the beginning and middle, but that’s how I roll. I need to see ahead to visualize the now. As I worked on Edgar Wilde I’d keep the book mockup on the table next to me, and whenever I was stuck I’d let my eyes stray over the cover for inspiration. It really helped!

My one bit of advice I’ve been saying to everyone lately, is simply to show up for it. You have no idea when the brilliant turn of phrase or plot twist will show up. For six months I met my manuscript every single night, and let my typing fingers listen for whatever might be there. There were many, many nights when nothing good showed up, or stuff that was crap. But in the meantime, the real stuff – the meat of the final draft – was also arriving. It’s like panning for gold. Eventually (hopefully!) you get a whole story, but you have to actually be there to meet it. You have to have faith in your story AND the respect and discipline to give it the attention it deserves. And that’s entirely up to you. 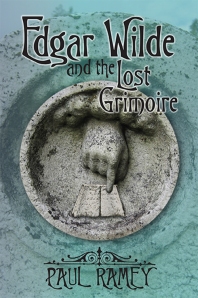