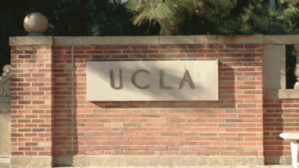 There are a few people in my local writing group that are in MFA programs here in Southern California. I’ve heard about their classes and seen the relationship between them and their professors by the notes they diligently follow as they work on their stories. When UCLA announced a Writers Faire on campus featuring free panels of professors to talk about writing and the ability to sign up for any class in their writing program at a 10 percent discount, I put the date on my calendar and decided to give the event a perusal.

Traffic was with me. This is a semi-religious statement known to most dwellers of Los Angeles when you find open road on a Sunday. Any other day of the week, my trip to the university would have been over two hours. I arrived at Parking Structure Two, with ample time to spare, before the first panel would begin.

“Welcome to the Writers Faire, do you know the password?” The young woman in the reflective vest asked in a bored voice.

I stared at the parking attendant, not sure how to answer her question. I resisted the urge to tell her Open Sesame.

“If you don’t know the password, or have a badge, it will be $12 to park. Cash.” I frowned. No one had mentioned to me that I needed to bring a badge or the increase in parking fees. The last time I had been on campus, parking was $8. I opened my wallet, but balked. It was not so much the higher rate, but the situation I was put in. Password indeed! “Can I make a U-Turn out? I will find parking elsewhere.”

On my way through Westwood, I had passed a small parking garage which proclaimed a $5 flat rate. It would be a little bit of a walk from the bottom of the hill, but the savings to my pocket book would be worth it to me, and it would salvage my pride. I found the walk to campus to be delightful as I passed by a botanical garden and then proceed on cement pathways through buildings that were a mixture of design from traditional brick to modern cement. 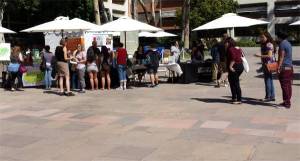 Ahead in one of the courtyards, I spotted a small grouping of white EZup tents and market umbrellas. Most of the tables were for writing classes at the university or the entertainment media program. On the pavilion an entire area was set aside for students to queue and enroll at a 10 percent discount. Several universities had information about their writing programs, including USC, UC Riverside, Chapman College, and Cal Arts. 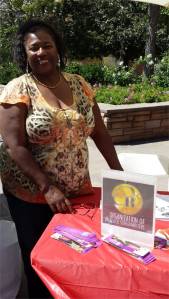 The first table I stopped at was the Organization of Black Screenwriters. A lovely lady in yellow explained about her non-profit group. She assured me that the group was open to anyone with an interest in screenwriting and her organization would be an excellent networking opportunity.

The Independent Writers of Southern California or IWOSC were offering mini-writing panels at the faire. They are a large, friendly writing society with plenty of activities for members to attend. I understand that they offer writing webinars in addition to their Los Angeles based meetings.

A Room of Her Own or ARHO is dedicated to furthering the vision of Virginia Woolf and bridging the gap between a woman’s economic reality and her artistic creation. The ladies tending their table had a drawing for a writer’s retreat and photos about the last one that the organization hosted at a desert resort.

The Writer’s Junction is a workspace where you can find the quiet of a library, the society of a coffee house and the focus of an office. It is located in Santa Monica and the space is available for a low monthly stipend. I loved the idea, but traveling to Santa Monica is simply too far for me. 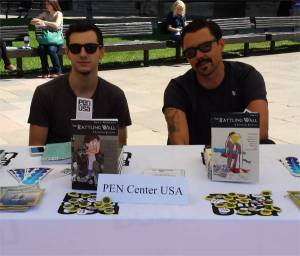 The final table I visited was shared by two literary magazines from PEN Center USA. The Rattling Wall is a year old and is looking for up and coming writers. The editor of the magazine was on hand to answer questions about his journal. The other literary magazine, The Los Angeles Review, was giving a free issue to interested readers. I found both the magazine representatives to be outgoing and genuinely interested in finding fresh talent for their publications. With hundreds of young aspiring writers underfoot at the Faire, I’m sure that they were successful.

It was time for the first battery of panels to begin. I selected a panel called Writing for the Youth Market. As the panel of four writers began I found myself questioning if these professors took the Writers Faire seriously. One arrived late and then informed the crowd that she was more a dancer than a novelist, another kept repeating “I don’t know why I’m here.”, and still another told the crowd of aspiring YA authors that if they wanted to be published, then they should seek out AARP, a senior citizen newsletter and write articles for this corporate publication. Only one panelist made an honest effort to be on topic and talk about what sort of writing you should do to make your story into young adult or new adult stories. To say that I was disappointed at the end of this panel would be an understatement. 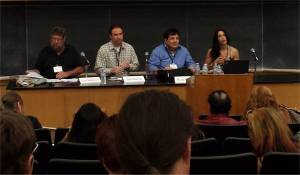 My next panel was across the courtyard and was entitled The Art of Writing and Publishing Short Fiction. This time, the panelists were professors of the advanced writing program. Each gave a short mini-lecture that demonstrated examples of information you might learn in their class and a listing of their experience and writing credentials was given. I was impressed by this panel, each instructor had an interesting personal story to tell, and because their skill as storytellers was evident, I felt that I got to know them better. My favorite of the panel was an inspiring hispanic woman that told us how she started as a substitute teacher at Los Angeles Unified School District, but left to continue with her writing, earned a fellowship, and then became a writing teacher at UCLA. Afterward, I went to the panel to ask further questions about publishing. The answer I received should help me begin my next step in writing. Of all the panels I saw that day, this was the best group. I would be honored to take a writing class from any of these instructors. 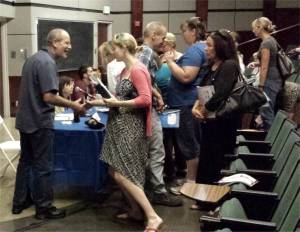 There was an hour break for lunch before I returned to the courtyard to attend two more panels. I found both of them to be less than desirable, but mainly because they were aimed at beginning writers who knew little about the market, publishing or how to organize and write their stories. The panels were more about selling the writing program to young students, than imparting writing information. What little information was provided was what you could easily find on the internet.

As I departed that afternoon, I pondered that the Writers Faire was more to look over the program and the professors that would be teaching you at UCLA than being an event to learn about writing. This is not an invaluable thing. Many times you sign up for a course with no idea what the teacher will be like. By having the opportunity to listen to the teachers speak, hear more about their classes and their backgrounds, it makes it easier to make an informed decision about which classes you might wish to take or about the entire program in general.

Writing is a personal experience and every teacher brings something different to the table. Make sure it is a meal that is worthy of your repast. I am glad that I took the day to go to UCLA and learn more about what the university has to offer.

This astropoem is inspired by Saturn's moon Encelodus. Huge geysers of water spew from the world, merging its matter with his host planet. It is a fascinating "world" in its own right and one where we may yet find native life.
BBQs are always great fun and I attended this one put on by my writer friend Joy. People who I haven't seen in person for at least two years due to the pandemic were there to share in the pot luck. Joy told us all to not "talk about writing" and choose a different topic. We all tried....but when a group of writers join together it is hard to speak of anything else!