At various science fiction conventions where I book tables, I’ve come across Tom Kirkbride and his excellent book displays. After chatting with him about writing during the conventions for the past few years, it seemed natural to ask him to come over for an interview here on No Wasted Ink. If you frequent the convention circuit, I hope you’ll stop by his booth or table and introduce yourself. 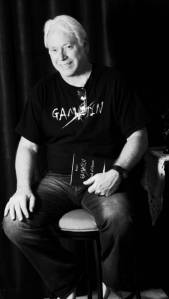 My name is Tom Kirkbride. I’m the author of the young adult sci-fi adventure, the Gamadin Book Series. I was born and raised in Southern California. My father was a 30-year Marine Corps Bronze metal soldier of three wars, my mother a devoted military wife. My passion has always been the sci-fi, astronomy, surfing, traveling, skiing and the sense of adventure. I have a daughter, Lara, who I’m extremely proud of. Recently, I began a new adventure with my wife Nancy among the tall trees of Oregon.

I started late as a writer, in my late twenties. I was living in Park City, Utah at the time. The stars were so bright and close, and I had run out of good sci-fi novels to read. I said to myself, I can do this. And so it began.

Actually, I’ve never really considered myself as a “writer”. I like “storyteller” better because writers sometimes don’t make good novels. I wanted my novels to be special character driven, high adventure novels so I set out to be a good storyteller and let others help me write.

Can you share a little about your book with us?

Sure. But it’s not just “a” book, it’s a sci-fi adventure series about teenage surfers who find an incredibly power spaceship in the deserts of Utah. Through much sacrifice, courage, and hard fought discipline they become elite Gamadin soldiers fighting for the freedom of others throughout the galaxy.

So many things on so many levels. Mainly, I guess, was the lack of good stories out there to read. I wanted to get back to Jules Verne and H.G. Wells type novels where there is actually a plot and good characters to root for. And like those two authors, they had basic “the betterment of mankind” themes in their novels. My novels deal with “Freedom” for mankind. Something I feel is slipping away from our country day by day.

The main title of the book series, Gamadin, evolved from on old 1939 buddy movie called Gunga Din about three British soldiers in India. I loved that film and the way the three friends stood side by side in the face of certain death. That’s how I see my heroes, for better or worse, pards to the bitter end. Gamadin!

Jules Verne and H.G. Wells are at the top of my list. Add to that Alexander Dumas, Charles Dickens and Edgar Allen Poe. More modern authors who have had great influence on me are JRR Tolkien, Wilbur Smith, James Clavell, Michael Crichton, and of course, JK Rowling.

JK Rowling. I credit her with having shown me the way in turning my 900 page original novel into a readable, multi-book high adventure series.

Who designed the cover of your book?

I did. After about two dozen drawings from my publisher that were horrible, by daughter said to me: “Dad do it yourself.” So I did. From all the positive comments I’ve received, she was right.

Audio theater is experiencing a revival due to podcasting. Why did you decide to adapt the first novel of your series into an audio drama production?

I’ve always envisioned the series becoming a movie someday. This was as close to a movie production of my first book Gamadin: Word of Honor as I could make. And let me tell you, the folks at Audio Comics, who made the production, hit the ball out of the park. Just find a comfortable chair, turn out the lights and you’ll be amazed at how you’ll feel like you’re actually watching the movie in 3D.

Could you explain the steps involved in creating an audio drama and some of the people that worked with you to create your project.

The heavy lifting is all done by an audio theatrical company called Audio Comics who bring professional, full-cast “audio movies” inspired by stories from comic books, graphic novels and genre fiction to life. It’s where Book II, Gamadin: Mons and the rest of my novels in the Gamadin Series will be produced.

What outlets are available to distribute your completed audio drama book?

Yes. Thank you for your continued support. Book V, Core is coming along slowly, but it will be out, hopefully in the not too distant future. In the meantime, the audio theatrical version is nearly complete and will be released within weeks. I’ll be posting a short teaser soon at the Gamadin website and Facebook pages. Within the first 30 seconds, you’ll discover why I’m so excited about this new dimension the Gamadin Series has taken. It’s great! 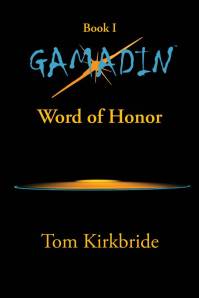 The Elgin Award honors the best speculative poetry collection and chapbook of the year. A book is eligible for the award for two years after it is published. Hosted by the Science Fiction and Fantasy Poetry Association, this award is recognized world-wide by the speculative community.
I am the featured guest on "Line Break" a poetry short wave radio program hosted by TD Walker. If you don't catch the broadcast, the program will be uploaded to their website at a later time. The information about the entire program is below: