Therin Knite is a college student who has written several speculative fiction novels and has dreams of literary stardom. It is always a pleasure to introduce young talent here at No Wasted Ink. 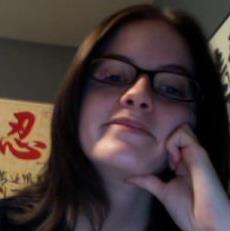 I’m Therin Knite, age 22, college senior at a little public university in Virginia. I’ve been writing for about seven years, blogging for three, and reading for longer than I can remember. My favorite genres (to read and write) are sci-fi, mystery/thriller, and urban fantasy. When I’m not reading or writing, I’m usually…actually, I’m pretty much always reading or writing. That and studying for far too many exams.

I started writing when I was fifteen after I had an idea that I wanted to do something with. Something more than just thinking. I wanted something substantial to come out of it, and writing was my strongest skill, so I turned to writing as a serious pursuit.

The day I finished my first novel manuscript.

Sure. Echoes is a futuristic sci-fi mystery novel. It’s the first book in a planned series. It follows the life of an intelligent young man named Adem, who gets recruited by a government organization to help them solve crimes involving dreams that come to life.

Well, I was coming off the failure of writing another sci-fi novel, and I wanted something fresh to work with. The premise of Echoes popped into my head, so I went with that, and it ended up blossoming into a successful project.

First person, present tense, and as close to the protagonist as possible. My main goal with writing style is to explore the personal relationships and development of my central character.

It’s the name of the main sci-fi concept the series revolves around. I wanted to go with something simple and easy to remember. The first book and series have the same name, Echoes. The subsequent books will have similar short titles.

I don’t have one central message, but I do touch on several themes. Echoes revolves largely around the develop of identity, both on a cultural and individual level.

Nah. I don’t usually pull from what’s around me, unless I’m inspired by another fictional work.

Stephen King – discipline. He can produce several high quality (and lengthy) books a year because he’s disciplined enough to actually sit down and write for hours upon hours every day. I’ve always envied that level of discipline; it’s something I can’t match, no matter how hard I try.

Garth Nix – imagination. The Abhorsen trilogy was one of my favorites in high school. I don’t read too much straight fantasy anymore, buy Nix still has my vote. I loved the world described in the trilogy, all of its little idiosyncrasies and nuances.

Jim Butcher – scope. I’m a huge fan of The Dresden Files. The structure of the series is what inspired the structure of Echoes. Butcher has an ability to craft great self-contained plots that simultaneously expand on a great overarching story line. It’s what I hope to achieve one day with Echoes.

Hm? Just one? No. I tend to use any writer I have on hand as my mentor at the time. If I’m stuck on something, I think of an author that does that thing well and look to his or her works for approaches to solving my problem. I frequently pull books off my shelves and read the beginnings, endings, or random middle passages and analyze how the author approached certain aspects of style. I think all authors have something to contribute to my understanding of the craft, so I utilize them whenever I feel in need of guidance.

My cover was designed by Robin Ludwig. I selected Robin because she had 1) fair prices, 2) an excellent portfolio, and 3) was ready and willing to work with me and figure out the best design for the Echoes cover. Other designers I looked into quoted far higher prices with little to no discernible quality increase. I enjoyed working with Robin. She was very timely in finishing the cover and ensured I was pleased with the design.

Read. Write. Don’t give up. Sounds pretty cliché, but it’s the truest advice you’ll ever hear about being a writer. You learn from those around you—those years ahead of you in the playing field known as literature, those who’ve already seen the things you’re seeing and done the things you’re doing. They know what’s up, and their work has been through the ringer time and time again and come out victorious. So read. Read their work to enjoy it. Read their work to learn from it.

Then write your own. Write what you imagine. Write what you know. Stretch yourself but not too far. Find a comfortable challenge for yourself at every turn, and if a piece doesn’t turn out well, figure out what you did wrong, learn how to avoid that mistake, and try again. You get nowhere as a writer unless you write. That’s the way you get over the wall between unpublished and published: you build a mountain of discarded manuscripts until it’s tall enough for you to just walk over to the published side.

Is it painful? Will there be hard feelings and defeats and setbacks and seemingly insurmountable obstacles? Of course. But that’s how the writing world is—harsh and unforgiving. It’s those who don’t give up, who keep pressing forward even when they’ve had the most critical feedback slap them in the face, who win out in the end. Perseverance is key.

Writing is a process. It has its ups, downs, and directions you can’t even understand. But at the end of the day, if you truly want to be an author, you throw yourself into that process again and again—preferably, you never leave it—and one day, it suddenly makes to sense to you.

For about five seconds.

All of you are awesome. Seriously. You are. You’re awesome for buying Echoes, for giving me honest feedback, for following my journey and leaving me encouraging messages. You’re awesome for just bothering to stop by my blog or read my book pages on Amazon, even though I’m some random nobody in the dredges of the blogosphere. You’re awesome, and I owe you guys a lot. Thanks for standing by me at the beginning of my writing journey—it’s always the rockiest time, and it helps (more than you know) to have people standing next to you for support.

One of my regular tasks is teaching Scifaiku workshops. Here I am teaching at SD Who Con in person (for the first time in years) using my handy-dandy dry-erase board for the composition part of the workshop.
It is always a pleasure to welcome guest writers to my blog, No Wasted Ink. With Nanowrimo pending, this is a great time to read up on helpful tips to make your November writing experience a success.