Miguel de Cervantes was born in 1547 in Alcalá de Henares, Spain. His father’s profession was that of a barbar-surgeon from Cordoba. He set bones, performed bloodlettings in addition to shaves and haircuts. Cervantes’ mother was the third child of a poor nobleman who sold his daughter into matrimony to pay his debts. Although their marriage was not a happy one, they still managed to produce seven children together. When Cervantes was a young man, he fell in love with a girl named Josefina, but because of his family’s poverty and Cervantes’ poor prospects, the girl’s father forbade her to see him.

Cervantes left Spain and enlisted with the Spanish Navy Marines in Naples in 1570. The following year, he sailed with the fleet of ships that defeated the Ottoman forces in the Battle of Lepanto. Cervantes had a fever during the battle but he chose to fight for his King and his God instead of hiding below decks. He was shot three times, which left his left arm immobile, but he considered his combat as a badge of honor.

In 1575, Cervantes sailed to Barcelona. His ship was attacked by Algerian pirates near the Catalan coast. It was a terrible battle in which the Captain and many of the crew were killed. The survivors were captured and taken to Algiers. Cervantes was enslaved for five years as a prisoner of war. He was returned to Madrid only after his parents paid his ransom. It was this period in his life that inspired much of the subject matter for several of his later literary works, The Captive’s Tale in Don Quixote and two plays that were set in Algiers, El Trato de Argel and Los Banos de Argel.

Cervantes life settled into middle-class normality after his return to Spain. Like many authors of his time, he was not able to support himself via his writings. Instead, he worked as a purchasing agent for the Spanish Navy. He also took the position of a tax collector, moving from town to town demanding the back taxes due the crown. Many of the characters and situations in Don Quixote were inspired by these “day jobs”. In his senior years, he managed to gain a sponsor and was able to turn to writing full-time.

In 1584, he married Catalina de Salazar y Palacios, whose uncle was accounted the basis for the character of Don Quixote. He remained poor until 1605, when his novel Don Quixote was released. The book was written as a satire of chivalric romance and the general public enjoyed Cervantes’ use of everyday speech in his writing. The book did not make him rich but it made him a popular writer internationally.

Cervantes died on April 22, 1616, a year after the second part of Don Quixote was published, of type II Diabetes. He was buried the next day in a convent in Madrid. Later his remains were lost due to construction work at the convent.

Coincidently, William Shakespeare also died on April 23, 1616. To honor the date when two of the greatest authors of all time died, UNESCO established this date at the International Day of the Book. What is not often acknowledged is that Spain had adopted the Gregorian calendar in 1582, but England was still using the Julian calendar. There is actually a eleven day difference in the date of these two author’s deaths. But why ruin a good holiday concept over a few dates?

“Too much sanity may be madness. And maddest of all, to see life as it is and not as it should be.” -Miguel de Cervantes

Don Quixote the novel begins with Alonso Quixano, almost 50, lives in La Mancha with his niece and their housekeeper. He is rational for the most part but his obsession with books about chivalry has distorted his perception into believing that those books were real. Inspired by the stories, he decides to be a wandering knight and look for adventure. He wears an old suit of armor and renames himself “Don Quixote”, refers to his thin horse as Rocinante and recruits his illiterate neighbor Sancho Panza to be his squire.

He goes out and arrives at an inn, believing that it is a castle, and asks the innkeeper to make him a knight. The annoyed innkeeper agrees just to make him go away. It is at this inn where Don Quixote spies the barmaid Aldonza Lorenzo and re-imagines her as his lady love, Dulcinea del Toboso. Next, Don Quixote discovers a man who is beating a boy and the mad knight forces this man to swear that he will treat the boy well. The man, however, continues with the beating once Don Quixote is away. When an encounter with traders ends in a fight, after the men insult Dulcinea, Don Quixote is beaten. It is then that Sancho and a peasant return him to his home and worried family. While he is unconscious, his housekeeper and his niece, with help from other local residents, burn the man’s chivalric books and close his library. They hope this will halt the old man’s dreams of adventure and keep him sane.

When he recovers, Don Quixote and Sancho continue with their journey and meet different characters, with Don Quixote’s imagination turning these meetings into quests. The man’s tendency to intrude in other people’s affairs and to skip paying his debts results in injuries and embarrassments. He tilts at windmills with his lance, believing them to be vicious giants and he ambushes a group of friars traveling with a lady.

In the second part of Don Quixote, published 10 years after the first, the people that Don Quixote and Sancho meet already know about the duo. Some of these characters trick Don Quixote to entertain themselves, sending the pair to adventures that end in practical jokes. This tests the knight’s sense of chivalry and his professed love for Dulcinea. Even Sancho tricks him one time, bringing back three peasant girls and claiming that they are Dulcinea and her two ladies-in-waiting. Near the end of the story, an encounter forces Don Quixote to reluctantly go home and possibly cease his chivalrous acts. 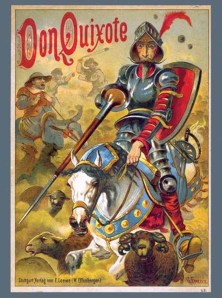 My first exposure to this classic tale of madness, fantasy, and ideas of what is important as citizens of the world, was a live performance on Broadway of Man of La Mancha. It was my first time in New York City as a young woman and my cousin suggested that I pick this play because it was classic theater, and it was a little less expensive being a revival. I was traveling on the cheap, so it seemed a good idea to me at the time. As I sat in the darkened theater, I was carried away by the scenes of Cervantes in the Algerian prison, pleading for his life by playing the tales of Don Quixote to his fellow prisoners, amusing them enough to spare his life. The songs from this play haunt me still. Later, I read the book Don Quixote and was transported into a world very different from modern America, a story that would be considered the first modern European novel and is regarded among the greatest works of fiction ever written. Cervantes’ himself was dubbed El Principe de los Ingenious, ”The Prince of Wits”.

If you have not read Don Quixote, I urge you to place it in your to-read list. You can find a free download of this classic novel at Project Gutenberg. There is also a movie version of Man of La Mancha (1972), starring Peter O’Toole as Don Quixote, Sofia Loren as Dulcinea, and James Coco as Sancho Panza. If you would experience the beautiful music of the Broadway play, I can recommend the film as well.