Vonda N. McIntyre was born in 1948 in Louisville, Kentucky. She moved around a great deal during her childhood finally settling in Seattle, Washington with her family. She earned a bachelor of science in biology at the University of Washington and graduated with honors. Before going on to graduate school, she attended the Clarion Writers Workshop in Clarion, Pennsylvania in 1970. This is a professional science fiction writer’s school. She went on to study genetics in graduate school and made the self discovery that a research scientist makes a wonderful background for a science fiction writer. She is a woman of many talents from riding horses in hunting, jumping, and three-phase events, earning a black-belt in Aikido, designing websites, partaking in public access television, crochet, and other handcrafts based on mathematical principals.

Ms. McIntyre became an ongoing instructor of the Clarion Writer’s Workshop, now in its new locations on the West Coast, and has been a workshop writing instructor at various colleges and conventions. She belongs to the Science Fiction and Fantasy Writers of America and several feminist organizations.

McIntyre has been writing since her early 20s. Her first novel, The Exile Waiting being published by Fawcett Gold Medal in 1975. It was followed by her Nebula award winning novel Dreamsnake, based off her Analog short entitled Of Mist, and Grass, and Sand. At that point, the author turned to writing Star Trek novels for Paramount and landed the job of writing the novelizations of their hit movies: Star Trek II, III, and IV. She also wrote a fanfiction novel for Paramount entitled The Entropy Effect that was extremely popular with Star Trek fans.

“It’s a haunting, rich, and tender novel that explores the human side of science fiction in a manner that’s all too uncommon. The world it creates is vivid and fascinating, and Snake is a marvelously well realized character.” —Roger Zelazny

Dreamsnake follows the journey of a young female healer in a post dystopic world that has been reduced to the neolithic and yet has retained technology of a biologic nature. There is space flight and knowledge of other worlds, but access to this is curtailed.

Snake depends on three different types of serpents in order to be a successful healer, without one she is unable to perform her biological tech based medicine. Sand is the rattlesnake that has venom for vaccines and potions, Mist is a cobra with stronger venomous properties as Sand, and finally there’s Grass whose venom is used as a pain reliever and acts as a hallucinogenic drug similar to LSD. What makes Grass unique is that he’s a snake from another world without the ability to breed (as far as we know) and therefore his kind are very rare on Earth.

After having saved a young boy named Stavin from a village of people who fear snakes and therefore murder her precious dreamsnake, Snake is called upon to heal another patient is injured after a fall from her horse. Snake is hesitant to attempt to heal Jesse due to her lack of a dreamsnake, but her duty as a healer overrides her concerns. Jesse is grateful to Snake bids her to go to a place known as Central City where the otherworlders touch down. There she might find a replacement for Grass. Snake, Jesse and a companion set off for the city together.

Not long after the start of their journey, Jesse begins to sicken. The place that she fell off her horse was a radioactive crater and she has developed radiation poisoning. Snake is unable to cure her of this ailment. Before Jesses dies, she bequethes her horse Swift to Snake in the hope that the horse will be recognized by her people and Snake will be allowed access into the city despite Jesse’s absence.

Snake sets off to a place called the Oasis where she learns that her belongings have been destroyed and her precious journal has been stolen. This is where we are introduced to Arevin, the young desert dweller that has fallen in love with the young healer. Snake continues her travels and enters another town where she heals the governor and invites the governor’s son to her bed. This is where we learn about some of the strange sexual trainings and odd tribal practices – the governor’s son failed in a thing called biocontrol (a biological method of birth control that is based on training instead of drugs) and because of this the boy walks around covered in a cloak to hide his shame. Snake helps him to overcome his failing.

Snake then meets a child that has been abused and burned. Snake later adopts this little girl named Melissa. The crazy person that stole her journal, we never know the sex of the character as it is transgender, attacks and injures Snake leaving her to require several days of healing before she can travel to Central City.

Once she reaches the city, Snake is turned away from completing her quest and does not gain access to another dreamsnake. In the end, this doesn’t matter to Snake, who is disappointed by the result, but who realizes that she is self-sufficient as a healer and can continue to heal people without the third snake after all. She has traveled far and learned a great deal of new things. Things happen for a reason and those occurrences shape us into who we are. Dreamsnake comes full circle and the things that were once thought to be obstacles become opportunities.

There is some controversy about this classic science fiction novel. It is one of the first to explore transgender and to feature a woman protagonist that is female of outlook instead of a poorly disguised male character. At the time, the male dominated science fiction realm was scandalized by this. There are relationships in this book, but the sex is freely given and somewhat graphic in places. While the story is structured like a classic quest, the outcomes are subtle and are gained via understanding and teaching instead of via violence. As a teenage girl reading the book when it debuted, I admit that it rather blew my mind. At that age I could not put my finger on why the novel had such an impact on me both as a reader and as a writer, but now I see the threads of feminism and new ways for societies to live that were quite intriguing. The biological tech is very interesting and something that may become a reality via our genetic engineers in the not too distant future. McIntyre’s background as a biologist clearly shows in her writing. 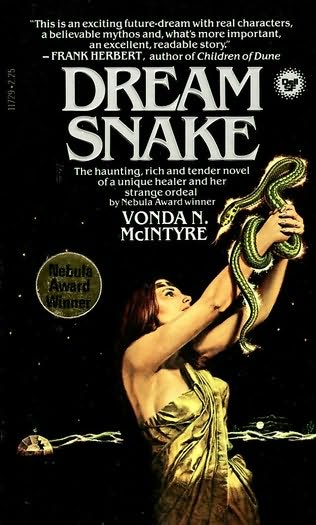 Dreamsnake is not in print, but you can purchase an ebook copy directly from the author. While the story is a little dated, it is a novel worth reading if you wish to learn more about classic science fiction.