Roger Zelazny was born in Euclid, Ohio, the son of of Polish immigrant. He had a typical childhood and showed an early interest in writing. In 1955 he earned a B.A. in English from Western Reserve University and went on to earn an M.A. in Elizabethan and Jacobean Drama from Columbia University in 1959. After graduation, he worked for the Social Security Administration by day and wrote science fiction by night. Zelazny wrote short stories at first, progressed to novellas and finally moved on to novel-length works. In 1969 he quit his day job and became a full time writer. Zelazny was an active member of the Baltimore Science Fiction Society. He was also a member of the Swordsmen and Sorcerers’ Guild of America (SAGA), a group of heroic fantasy authors from the 1960s, much of their work was published in Lin Carter’s Flashing Swords! Anthologies.

Zelazny was married Sharon Steberl in 1964 and later they divorced. Two years later he married Judith Callahan. They had two sons and a daughter. The author died of cancer in 1995, at the age of 58.

While Zelazny is best known for his Chronicles of Amber series, of which Nine Princes in Amber is the first book, he has won 6 Hugo Awards, 3 Nebula Awards, 2 Locus Awards, 2 Seiun Awards, 2 Balrog Awards and 1 Prix Tour-Apollo Award. Many years, Zelazny’s work competed with each other for the same award.

In 2010, Roger Zelazny was inducted into the Science Fiction Hall of Fame.

“I like libraries. It makes me feel comfortable and secure to have walls of words, beautiful and wise, all around me. I always feel better when I can see that there is something to hold back the shadows.” -Roger Zelazy from Nine Princes in Amber

Nine Princes in Amber begins when Carl Corey wakes up in a hospital and has no idea how he arrived or even who he is. He is suspicious of the circumstances of his stay and escapes the room, only to learn that he is recovering from a car accident and his hospital care is being paid for by his sister.

When Carl flees the hospital, he goes to his sister’s house, wishing to learn more about his unknown identity. There he is called Corwin and his sister refers to herself as Flora. In Flora’s library, Corwin finds a set of customized Tarot cards, the trumps of the Major Arcana are all replaced with portraits of members of his family. There are nine brothers, including Corwin and four sisters. While at Flora’s house, his younger brother Random contacts him on the phone. When Random arrives, he is being chased by strange humanoid creatures, which are defeated in concert by Corwin, Flora and Random. Corwin realizes that strange forces are at work that have little to do with how he thinks Earth should be.

Random asks Corwin if he is going to return to Amber and offers to “hellride” with him there. As the two brothers travel, Random subtly shifts the world around him using an innate ability that fascinates his elder brother. They arrive in Amber, a place of sublime beauty and order from which the entire universe takes its form.

In Amber they meet with another of their brothers, Julian. They battle and Corwin manages to unhorse Julian from his steed and take him prisoner. Corwin is learning that the nine princes of Amber are all at battle because their father has been missing for centuries and is presumed dead. When one of Corwin’s sisters arrives, fleeing from yet another brother named Eric, Corwin is moved to confess to Deirdre about his amnesia. Deirdre tells Corwin of the Pattern, from where the power of the royal family to manipulate worlds springs from. It is Deirdre’s opinion that if Corwin “walks the pattern” again, it would restore his memory.

Corwin, Random and Deirdre leave Amber and travel to a nearby reflection world called Rebma. It is an underwater city and ruled by their sister Moire. Since Rebma is close to the original Amber, it also contains a near perfect reflection of the Pattern. Moire grants Corwin permission to walk the Pattern because she believes that the three of them will support her in the defeat of Eric, their brother who holds the royal castle in Amber and is amassing a huge army. There is a price: Random must stay behind in Rebma and marry a blind girl named Vialle. Corwin walks the Pattern and his memory is indeed restored. He is a true prince of Amber and remembers a long life of centuries along with the powers which the Pattern give him: the power to walk through “shadow” and to pronounce a curse before dying. Walking the Pattern also grants him the power to project himself through space and he does so, going to the Castle of Amber where he finds a safe location to rest and think about what he has learned.

In the castle, Corwin searches the library and finds another pack of Trumps, tarot like cards that allow him to create shortcuts through “shadow” and travel to other worlds. He now knows how to use them. Corwin is discovered by Eric and they duel. Corwin doesn’t fair well in the battle and he uses the Trumps to escape.

Corwin begins to use the Trumps to contact his siblings. He makes deals with the various princes of Amber, learning who is aligned with whom and gaining an understanding of where he stands in the royal intrigue. His car accident was no accident after all, but part of the intrigue for the throne of Amber. He joins forces with his brother Bleys and together they command a navy to take Amber from Eric. In the end, Corwin and Bleys are not successful. Bleys falls over a cliff and Corwin is captured and thrown in chains. Eric sentences his defeated brother to be imprisoned and his eyes burned out. Eric crowns himself King of the one true world.

Corwin endures years in prison, blind and helpless. Although he is visited by occasional friends, no one can help him due to their fear of King Eric. As time goes by, Corwin’s eyes begin to regenerate and he begins a futile escape attempt with the use of a spoon. It is during this time, that the former keeper of the Pattern, appears out of nowhere. Dworkin Barimen is insane and has been imprisoned for a long time. He explains that he has come to Corwin by drawing a picture on his own dungeon wall, creating a Trump to travel. Corwin asks Dworkin to draw a picture of the Lighthouse of Cabra, a place he considers a safe haven. Once Dworkin completes the drawing, Corwin projects himself out of prison.

Roger Zelazny has been one of my favorite science fiction and fantasy authors. Nine Princes in Amber was my introduction to his work, but it certainly wasn’t the last book of his that I read. One of the common themes of his writing is that there exists an infinite number of worlds and that every world that can be imagined must exist somewhere. The powerful characters in his books usually have the ability to travel to these different worlds in some manner. The idea that the characters are never sure if they are creating these special places or are simply finding them is the metaphysical question that they ask themselves and never quite answer.

Sometimes his stories are pure fantasy, and others they combine science fiction and fantasy together. Either way, a Zelazny novel was always something unique and wonderful to read. I highly recommend the Chronicles of Amber. The books might be a bit old, but they hold up well and are still an entertaining read. 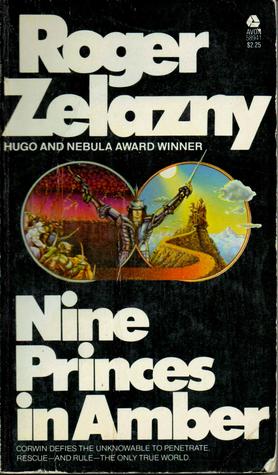 The Chronicles of Amber:

Zelazny also wrote seven short stories set in Amber. The last five of these stories form one tale set after Prince of Chaos, the final novel.

A happy day for our feline friends! My little office assistant is always busy "helping" me as I work. Mainly stealing my fountain pen when I least expect it.
ANAHEIM POETRY REVIEW IS OPEN FOR SUBMISSIONS