When I asked Will to describe himself as a writer, he replied: I write epic fantasy in about the same way as someone repairs a broken pot; with occasional layers of glue so thin you can hardly see the progress until I’m done. It is with pleasure that I introduce you to author Will Hahn, here on No Wasted Ink. 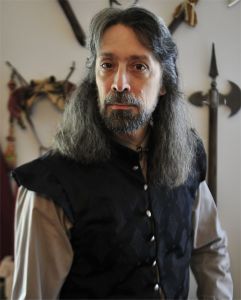 Born in Vermont among five sisters, Will Hahn was thus plunged into epic struggles at an early age. Surviving them, he studied Ancient History, later teaching it until he began to resemble an eyewitness. Along the way to a new and very different career, he unaccountably found himself both a husband and father, an adventure that quite simply drowns all others in its joyous din. So his newfound vocation to write epic fantasy, which would normally have confused the life out of him, now seems quite natural. Will wears as much grey as possible, as often as he can.

I was blessed with a very literate and passionate family life, and was always writing something. Comedy sketches, class skits, radio plays and some of the longest and most torturous love-letters ever to meet the alphabet; but I never composed tales of any kind until June of 2008. For any being as old as I am, that’s very recently!

OK, now we arrive at the tricky part. I still don’t. Fantasy writers are incredible people who make things up. With all the encouragement in the world I never “wrote” one word about the Lands of Hope. Only when I gave up trying to DIS-believe that world, and accepted that it was completely real to me, could I recognize that I am in fact a chronicler. And I have been chronicling like a madman since that day almost seven years ago.

I’ll try! {for epic fantasy, “a little” is hard} Judgement’s Tale is a novel unfolding in four books. Part Four, entitled Clash of Wills is due at the end of March 2015. It’s the tale of how the Lands of Hope descended from centuries of peace and stability into grim challenges. The year 1995 ADR marks the beginning of the Age of Adventure; among educated folk, the word “adventure” is not used in a complimentary fashion! And it’s often not the nobility, or the leadership of the settled kingdoms that provides the spark to meet these tests, laid down by an ancient liche and an Earth Demon who are trying to return the Lands to their former thralldom under Despair. Instead there are a scattered few—too young, too ignorant and too far apart—who must play the heroes if the Lands are to survive.

He did. Solemn Judgement, for whom the tale is named, was the first person I ever saw from the Lands of Hope; but it was some time before I realized he was a part of that world (which I’ve been studying for over thirty years). That’s how far apart from everyone he usually is. If you start to read of him you’ll see, he’s relentlessly driven and serious, and he aimed that same determination my way, hounding me to try even though I thought the job was impossible. Maybe a little of Solemn rubbed off on me; here the tale is nearing completion and I would never have thought that was going to happen.

I call myself a chronicler and a day-job dilettante. I am very fortunate to have a great full-time job and of course there’s always plenty going on with family. When I get a half-hour in the morning (between feeding the cats and the ladies rising for the day), or perhaps an hour of an evening (when the email queue is cleared and the ladies are watching a cooking show), I can squeeze in a few more paragraphs. What emerges from the keyboard tends to be fairly polished material: I have the advantage of extensive notes taken from my decades of study and a lot of familiarity with the events themselves. And since there are such long pauses between writing, it’s always on my mind and tends to “set”, like a casserole before you put it in the oven.

So here’s the thing. Solemn Judgement, called by most The Man in Grey, has often been nearby when the great deeds of heroes happen in this age. But I tended to follow the groups, and Judgement was always, always alone. Even other adventurers can’t accept him! Then I realized something; by the time of the deeds I was chronicling (as late as 2001-2002 ADR), The Man in Grey was already known (and disliked) everywhere. But he kept acting like he hadn’t come from the Lands originally. I finally noticed, whatever his outward maturity, Judgement was not very old. So I became interested in his beginnings, and started to trace them in my research. The result was quite literally Judgement’s Tale.

Aside from “wow, everything this guy publishes is probably pure gold”? Honestly, I don’t think epic fantasy is where you would go for an extraordinary new philosophy or take on the Alleged Real World. We read of these incredible new places and situations in order to learn again the eternal truths. In the Lands of Hope I can promise you, Hope is the side you want to be on, crime does not pay, and those who sacrifice for the ones they love are heroes. In “Judgement’s Tale”, we see the difference between the word “noble” used as an adjective, as opposed to a noun. There are big changes afoot here.

Emphatically, no. I will admit that my experience studying and teaching Ancient History suited me to understand some of the limitations of a customary and hereditary society like that I observe in the Lands. And one thing my love of history showed me was that human life never changes. Once you understand what a person was dealing with—perhaps being a second class citizen, maybe a strong need to go into the same trade as the father—then you can clearly see the choices they made and empathize with them. I spend a lot of time following heroes around, and I believe their virtues are the same here in the Alleged Real World.

I would have to list Tolkien, C.S. Lewis, Ursula LeGuin and Stephen Donaldson as the acknowledged masters of this genre; I’m a big re-reader, and their tales all figure highly. The heroic fiction of pulp authors like Robert E. Howard and the golden age of Comics resonate with me as well, for the economy of prose (which I lack) and the commitment to action (which I think I carry). More recently, Tad Williams and G.R.R. Martin have of course shown me a lot about scene-setting, character-hopping and the way to build a world view through the lens of many individuals.

If you had to choose, is there a writer you would consider a mentor? Why?

Fellow indie author and my current micro-publisher Katharina Kolata is an absolute inspiration for her boundless energy, many projects, unflagging support and a constant can-do attitude whatever the changes brought into this market. Without her I’d still be a chronicler, but probably with half the output I have now.

I left this important job in the hands of my publisher and good friend Katharina, who has given all my titles a make-over that I think really establishes a consistent tone.

Please continue writing, the actual tales I mean, because that’s the most important thing. If you feel up to publishing yourself, that’s great—it was crucial for me to give myself deadlines for publication and then meet them and I hope that works for you too. If you want to test the waters and market yourself, that’s great too: lots of fabulous people and great advice out there. But write. Never stop thinking about what to write next. That more than anything has brought me a deep joy and great satisfaction.

Two things. First, that e-books make excellent gifts! And more seriously, I cannot adequately express my jubilation and gratitude to those who have shared such strong, positive feedback on my previous Tales of Hope. To see someone I have never met take the time to read the book, and write such a detailed and authentic review as those I have seen, is priceless and a great encouragement to continue. Please don’t hesitate to review an author’s book if you have the time, it’s the most important way you can support them after buying it in the first place. Thanks! 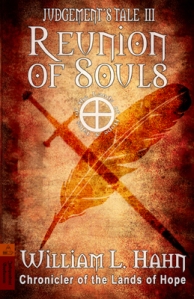 One thought on “Author Interview: Will Hahn”