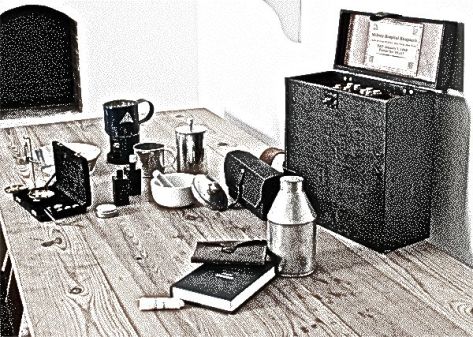 Bonesaws and Bloodletting: Medicine and Folk Remedy in the Eighteenth Century

Many years ago I put the final full stop to a timeslip novel that catapulted its characters back from twenty first century Yorkshire the the 1950s. The novel was quite unlike anything I had written before and remains so to this day, fantasy not a genre that I would usually find working in. Fantasy, however, is not so easily defined as one might think and even in a work grounded firmly in the real world, we might find an element of everyday magic among the mundane.

My timeslip novel was a departure for me in more ways than one and, as some people may already know, I can usually be found settled squarely in the coffeehouses and gin salons of the long eighteenth century. On my daily blog, I share true stories of the Georgian and Regency era, whilst my fiction is set in that same period and is rooted firmly in the sometimes seedy underbelly of the eighteenth century world. My fictional companions are decadent playwrights and flamboyant whores, debauched hellfire patrons and, just occasionally, the Prince of Wales and his illustrious family. There might not seem to be much room for fantasy there and yet, in a world where the furies of the guillotine sell sleeping drafts by the banks of the Seine and an erstwhile Edinburgh physician mixes mysterious powders and tinctures in his St Andrew Square home, the line between medicine and folk remedy is perilously and, on occasion deliberately, blurred.

I strive for reality and accuracy in my fiction as much as I do on my blog yet, as a person who has always had an interest in the esoteric and those things that exist slightly outside of our comprehension and belief, the chance to mix in some folk remedies is irresistible. The question is, of course, where does the line between magic and remedy begin? In the world my characters inhabit, explicitly magical happenings would be jarring and unconvincing, let alone utterly out of place. Instead, it was important to me to take the folk remedies that I have known of since my childhood and place them in a milieu where their use and success was neither noteworthy nor unlikely. In fact, in the long eighteenth century, it could even be the physicians themselves who were viewed suspiciously by some of the populace, with doctors and surgeons in particular on occasion believed to be playing God. In the Age of Enlightenment, science and belief were constantly vying for the upper hand and for an author, this opens wonderfully dramatic possibilities!

Happily, this means I am able to show the dichotomy between the old and new ways and reflect the truth that both folk remedies and those taught in the medical schools of London and Edinburgh had their benefits and followers. it is a world where people are just as likely to follow their parents and grandparents in turning to the local healer, with the people of Paris turning to Madame Girard as she pedalled foul smelling bottles and mysterious powders from her single room on the banks of the river just as those well-helped Edinburgh souls put on their finery and take a trip to see Doctor Dillingham in his Edinburgh consulting rooms. Indeed, Dillingham’s own repertoire includes many a folk remedy cleverly repackaged to look like the latest in modern medicine. To Dillingham more than any other character, the latter is simply the next step in the former, in an evolution that has been ongoing for centuries. It is particularly fitting that he should embody this dichotomy most of all because he is a character whose public face is very much at odds with that he presents to those who know him personally.

The line between medicine and folk remedy is one that my characters tread carefully and allows me the chance to explore the best of both worlds. Because I honestly believe that approaches have their benefits, it’s a pleasure for me to delve into scenes of gruesome surgery and esoteric remedies and give both the reader and the thankfully fictional patients one or two surprises. It might not all be leeches, bloodletting and bonesaws, nor is it all cauldrons, herbs and muttered incantations but, where there’s a healthy mix of the two, I’m happy and my characters are, hopefully, healthy and well!

Glorious Georgian ginbag, gossip and gadabout Catherine Curzon, aka Madame Gilflurt, is the author of A Covent Garden Gilflurt’s Guide to Life. When not setting quill to paper, she can usually be found gadding about the tea shops and gaming rooms of the capital or hosting intimate gatherings at her tottering abode. In addition to her blog at www.madamegilflurt.com, Madame G can also be spotted on Twitter, Facebook and Google+. Her first book, Life in the Georgian Court, will be published by Pen and Sword Books.

2 thoughts on “Guest Post: Bonesaws and Bloodletting by Catherine Curzon”