Author Kim Stanley Robinson was born in Waukegan, Illinois, but mainly grew up in Southern California. He earned a B.A. in literature from the University of California, San Diego in 1974 and gained a Masters in English from Boston University in 1982. He returned to his California ala mater in 1984 to finish a PhD in English.

Robinson is an avid backpacker and many of his novels feature characters that hike or climb mountains including his Mars Trilogy. He doesn’t consider himself to be a mountain climber, more of a man that loves the great outdoors. In 2009, Robinson was a Clarion Workshop instructor and the following year he was the guest of honor at the 68th World Con. His novels have won 11 major science fiction awards and 29 nominations.

He is married with two sons and his family currently resides in Davis, California.

“History was like some vast thing that was always over the tight horizon, invisible except in its effects. It was what happened when you weren’t looking — an unknowable infinity of events, which although out of control, controlled everything.”
― Kim Stanley Robinson, Red Mars

The epic novel Red Mars begins when one hundred participants are chosen to go to the red planet after a detailed and rigorous selection process. The winners are geniuses from Russia and the United States along with a few other countries. They undertake a nine month space mission to reach their goal of forming a colony base on Mars. “Underhill” has nuclear generators for power, medical stations are established, GMO foods are produced on martian farms and new life forms that can survive on the Martian surface unprotected are also genetically created. During this time, a debate that started on the spacecraft and continues both on Mars and Earth about the moral right of humans to terraform and mine Mars for their own profit.

Two factions arise on Mars. One is the Reds, led by Ann Cayborne. She believes that Mars should not be used for corporate profit or for Earth’s expansion. The other are the Greens, led by Sax Russell. He believes that terraforming is important in order for life on Mars to continue. As time goes on, these and other political arguments tear the martian settlement apart, even as more new Earth immigrants arrive to worsen the situation. Added to the mix is a new discovery by a medical team, a drug that grants near immortality. One of the medical team disappears with a group of followers and they harvest many eggs in order to produce children at will.

What was once a scientific operation, turns into a struggle for power by governments and international companies who wish to carve out a piece of Mars for themselves. Mining on Mars increases and more workers are imported from Earth to handle the work load. The new city domes become crowded and understaffed. Riots begin as water and other supplies are lost or damaged, causing massive flooding and death. Even the entire moon of Phobos is destroyed in the chaos.

Most of the first hundred colonists are killed in the resulting revolution. Their work is destroyed. The survivors take refuge in a hidden colony called Zygote under the southern pole and begin to build a new life for themselves on a chaotic and destroyed Mars. 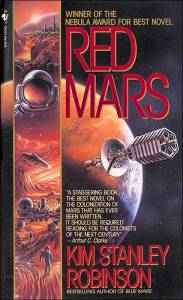 One of the draws of Robinson’s work is his detailed world building based on known science. There are many “sense of wonder” descriptions of the Martian landscape that draw you in as a reader and give you an appreciation for the natural environment. His details about the science behind the transformation of Mars make you wish that you could visit these people and places. As someone who enjoys natural beauty, this was one of the aspects of the novel that I enjoyed. I also liked how the author shifted the third-person point of view among the main characters of the book, allowing me to see Mars, its society and its culture through their different perspectives.

Robinson often features scientists as heroes, not because of their physical brawn, but more for the importance of their discoveries, networking or collaboration with other scientists. The characters struggle to preserve and enhance the world around them in a manner evoking individualism and entrepreneurship such as was found on the American Frontier a century ago. In Robinson’s novels, scientists must take responsibility for educating the public in the responsible use of their discoveries and often emerge as the best people to direct public policy on environmental and technological issues. Robinson could be considered an anti-capitalist, his ideas promote an egalitarianism that more in keeping with socialist ideals. The Martian Constitution in his Mars Trilogy, draws upon these social democratic ideals and focus on the community-participation elements in the Martian’s political and economic life. I personally do not agree with all his political views, however, Robinson is not overt in his preaching and it is tolerable if you keep an open mind and enjoy the environmental and technological ideas.

Whatever your views on his political ideas, Red Mars is a detailed portrayal of how this planet might be colonized in the near future with present day technology. Considering that there are programs in real life that are in the planning stages of going to Mars with an eye toward colonization, Robinson’s books are incredibly timely and an interesting read. It is my hope that the destruction and chaos that happens on Red Mars might be bypassed by our own colonists, but human nature being what it is, we can only hold our breath and hope for the best. I feel that the Mars Trilogy is well worth reading and I hope you’ll consider adding it to your to-read list.