Anne McCaffrey was born in Cambridge, Massachusetts. The only daughter of three siblings and the middle child, she grew up on the east coast of the United States. Eventually, she graduated cum laude from College where she gained a degree in Slavonic Languages and Literature. In 1950 she married Horace Johnson and they had three children: Alec, Todd and Gigi. The family lived in Wilmington, Delaware for around a decade and then moved to Sea Cliff, Long Island in 1965 where they remained until 1970. During this time, Anne McCaffrey began to work full time as a writer and served a term as the secretary-treasurer of the Science Fiction Writers of America. Her duties not only included the publishing of two monthly newsletters for the guild, but she also handcrafted the Nebula Award trophies.

In 1970, McCaffrey divorced her husband and weeks later took her children to live in Ireland. During the 1970s, Ireland offered artists to live exempted from income taxes and Anne McCaffrey, being of Irish descent, emigrated to Ireland to take advantage of this opportunity. Anne’s mother soon joined the family where they lived in Dublin. McCaffrey’s books about the dragons that lived in a symbiotic relationship with the human settlers of the planet Pern became bestsellers and classics of science fiction. They paid for her cottage in Ireland that she called “Dragonhold” in honor of the dragons that supported herself and her children. She lived there until her death at the age of eighty five.

The roots of the Crystal Singer series begins while Anne McCaffery was a student studying voice. She performed as a singer, directed a play and was employed by the record label, Liberty Music Shop. Despite these successes, it was during her later years of study that she was informed that there was a flaw in her voice that would limit her in achieving in the field of music. McCaffery was devastated by this experience and used it in the Crystal Singer series to shape her main character Killashandra Ree.

The book first began as a series of shorts that were published in Continuum Magazine.

“There’s nothing wrong in doubting. It sometimes leads to greater faith.”
― Anne McCaffrey

Crystal Singer begins when a young vocal student named Killashandra Ree is finishing ten years of study in order to become a vocal soloist of a futuristic civilization known as the Federated Sentient Planets. She anticipates becoming a “rock star” of interstellar proportions. During her final exams, it is discovered that she has a fatal flaw in her voice that will forever prevent her from singing lead roles, despite her perfect pitch and performing talents. Killashandra is heartbroken and plans to leave both the school and her home world in private disgrace.

At the spaceport she meets an older man who uses his musical skills to identify an arriving space shuttle that is about to explode to the authorities, averting the disaster. The two hit it off and he treats her to a whirlwind romance on her home world while he is on vacation. She grows curious about her new lover and his profession of “crystal singer”. It is a occupation of people with perfect musical pitch that use their voices to control devices in which to mine a very rare crystalline mineral on the planet of Ballybran. These crystals are used in most of the complex systems that power interstellar communications and power much of the machinery of her civilization. It is a dangerous profession, but one that earns high credits and has a select and small membership. Although she is warned away repeatedly, Killashandra is drawn to the mysterious Heptite Guild and becomes determined to become a crystal singer herself.

Travel to Ballybran is forbidden to all but its residents. On the moon of Ballybran, Killashandra learns the reason why. Anyone that ventures onto the planet is infected by a symbiotic life form that invades the human body and causes genetic mutations. Many people simply die. Others only gain a partial adaptation that allows them to live, but with reduced hearing or eyesight. They are forever confined to the planet, unable to leave because if they do the symbiont dies and they along with it. Those few that get a full adaption to the symbiont become the crystal singers who gain increased vision and hearing, rapid healing and a long life. It makes them sterile and in the end they suffer memory loss, paranoia and dementia, but only after hundreds of years of life. They also can depart Ballybran for short periods of time without their symbiont dying.

Headstrong and stubborn, Killashandra journeys to Ballybran along with thirty other inductees. The novel follows her and her classmates during their education while they wait for the invading infection. One by one, they fall to the symbiont until all have been converted. During this time she gains the attention of the head of the guild, a man named Lanzecki. He offers her a job that she can’t refuse, one that not only allows her to use her new skills as a crystal singer, but one that might allow her to present a public performance that would put her back in the spotlight she trained all those years for. 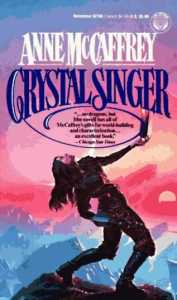 I have always loved the Crystal Singer series by Anne McCaffery. I first read the book when it was first released in the early 80’s and felt a strong identification with the main character, Killashandra Ree. She is a complex character, a combination of confidence that borders on arrogance and yet inside she is shy and vulnerable. Many artists have this sort of personality and I liked that she was a strong woman that was willing to take control of her own life in the face of failure. She felt like a real and likable woman to me.

The Federated Sentient Planets that Killashandra lives in is powered not by manufactured technology, such as ours is, but by natural forming crystals that can be sung into service. I love the concept of human art meeting function in this way. It is quite unique and the world of Ballybran and the Heptite Guild society is an interesting concept. The visual of the crystal singer serenading a mountain side and it singing back to her is powerful and one that you will not soon forget. Of all the series set in the universe, I feel that this one is the most clerical in nature. You need a card for everything and the machines monitor all the details. It reminds me of our current way of life.

There are some outdated qualities to the book. During the late 70s and early 80s, sexual freedom was thought to be women sleeping around much as single men of the time period did. Killashandra has several lovers in this fashion. The sex is free and easy, completely consensual, but without long term attachments. There are no steamy sex scenes in the book, but in my view the easy going relationships don’t quite mesh with what we might think of feminism now.

The men in the book were also somewhat paternalistic toward the female main character. Again, this was a common attitude during this decade and it has carried over into the culture of this interstellar society. It is not as bad as in some books and for the most part I felt that Killashandra was treated as an equal by peers, even when they could not stand her for her “perfection”.

While Crystal Singer is not a Nebula or Hugo award winner, it does have staying power and I believe that it would most appeal to high school or college aged readers. It can be a little difficult to find at the local library due to its age, but you should be able to find it on the online outlet of your choice. Go and find the books. If you love classic science fiction and enjoy reading females authors in this genre, Crystal Singer is a great choice.