Author Carolyn Janice Cherry is better known by her pen name C. J. Cherryh. She is a Hugo Award winning science fiction and fantasy writer with 40 novels under her belt. Cherryh is pronounced “Cherry”. When she first began publishing her stories in the early 70s, Cherryh was asked to create a pen name by DAW editor Donald Wollheim. He felt that her real name more fit a romance writer instead of a science fiction writer. She also switched to using her initials to disguise that she was female. This was a common practice at the time since women authors were not as accepted in the genre as male authors were. Fortunately, that is no longer the norm in the genre.

C.J. Cherryh was born in 1942 and raised in Lawton, Oklahoma. In 1964, she earned a Bachelor of Arts degree in Latin from the University of Oklahoma, and went on to gain a Master of Arts in classics from Johns Hopkins University. After graduation, Cherryh became a high school teacher of Latin, Ancient Greek and the classics

After graduation, Cherryh taught secondary school in the Oklahoma City public school district. While her job was teaching Latin, her passion was history. During her summers off, she would conduct student tours of ancient ruins in England, France, Spain, and Italy.

As busy as she was, Cherryh could not shake the writing bug. She had been writing stories since the age of ten and continued to write novels in her spare time. She did not follow the usual path of science fiction writers of the time, starting with publishing short stories in the national magazines of the day, but instead her focus was on writing novels. While Cherryh has written shorter works, she did not begin to do so until after she had published several of her novels first.

Her break came in 1975 when Donald Wollheim bought two manuscripts she submitted to DAW Books. She stated once in an interview on Amazing Stories, “It was the first time a book really found an ending and really worked, because I had made contact with Don Wollheim at DAW, found him interested, and was able to write for a specific editor whose body of work and type of story I knew. It was a good match. It was a set of characters I’d invented when I was, oh, about thirteen. So it was an old favorite of my untold stories, and ended up being the first in print.”

It was the start of a long and fruitful friendship. Cherryh has gone on to publish almost 40 novels, most of them with DAW, but not exclusively, and still continues to write more books today. She has won the Hugo Award for Best Novel twice, first for Downbelow Station and then again for Cyteen, novels that are part of the Alliance-Union Universe series that Forty Thousand in Gehenna is also part of.

Currently, Ms. Cherryh lives in Spokane, Washington, with her partner science fiction/fantasy author and artist Jane Fancher. She enjoys skating, traveling and is a regular guest at many science fiction conventions.

Forty Thousand in Gehenna is not a normal story about the colonization of a planet where an intrepid group of humans set up a foothold on a world and build. Instead, it is the story broken into two main sections with a few smaller vignettes bridging. The characters are born and die of old age as the centuries go by. The focus of the novel is about the interaction between humans, from Cherryh’s Alliance-Union universe, and the Caliban, large lizard aliens that are not the unintelligent animals the colonists were led to believe when they first arrive.

Gehenna, which means “hell”, is an experimental colony set up by Union. It is made up of a small faction of “born men” and forty thousand “azi”. The azi live to the age of 40 and then their bodies fail. When they are cloned in the lab, each human azi is programmed psychologically so that he or she is subservient to the born men and happy in their place in society. They are the worker slaves of the Union civilization and outnumber their aristocratic masters a thousand to one. The azi are the key to how Union manages to take over worlds ahead of their competitors, the merchants of the Alliance, giving biological numbers to the leaders of Union to place where they will.

The first part of the novel is about the original colonists and follows a born-man named Gutierrez who comes aboard the colony disguised as an azi and a clone named Jin and his love interest Pia. Within a few years, it is realized that Union has abandoned Gehenna and no more supplies or the promised azi labs arrive as scheduled. The colony begins to fall apart as the machines break down. The azi begin to have children instead of reproducing via cloning techniques and teach their programming to their children as best they can. In the mix, the alien Caliban intrude as the settlers realize that the giant lizards are far more intelligent than first realized. The azi children imprint on the Caliban as well as their azi parents. This creates a entirely new culture that grows more different as the centuries go forward.

The middle of the book covers when Alliance discovers Gehenna and via a mix of reports and chapters from many different points of view, we see how the outside stellar civilization sees what is happening on the planet in the long view. Alliance meddles in the Gehenna culture with ill effects.

The final part of the novel covers a war between the descendants of Jin and Pia’s two children. The descendants have formed three cultures, one is aggressive and “male” the other is more passive and “female”. The third group are termed “weirds”. They are people that choose to live with the Caliban in their tunnels. All groups have formed a symbiosis relationship with the alien Calibans. While the Alliance watches and files reports, the cultures clash for domination of Gehenna. 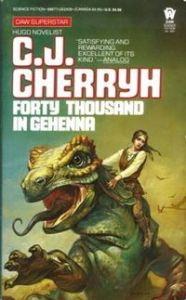 Diving into the Alliance-Union Universe can be confusing. There are a great many novels, some of which follow their own mini-series inside the series. This book can be considered the first of a trilogy, the final installment only being written a few years ago. The original cover of a girl riding a Caliban lizard into battle is what originally drew me to the book. It reminded me a great deal of McCaffery’s dragons of Pern, who also had a symbiotic relationship with their human partners. As it turns out, the Caliban are a more complex komodo dragon with a unique way of communication. You learn about it via submersion just as the colonists do in the story. Cherryh is a master at not only developing sweeping historical world views that explore intricate human cultures of her own devising, but she also is adapt at creating stunning alien cultures.

I am fascinated by the concept of the human clones known as azi. Here in Gehenna we get a good look at the Union’s tank-bred, hypnotic-tape-education workforce. The azi make up most of Union’s population and has allowed it to out-breed Sol and the Alliance in these stories, but at what cost? Cloning is a process that is starting in our day and age. The morals and ethics behind the technology have not been fully addressed. What was once science fiction may soon be science fact.

Finally, I enjoy that Cherryh does employ female protagonists in her stories. While in the first section she followed two male Azi, in the last section the protagonist was a girl named Elai who was certainly no wimp and proved to have the wit to fight for her community and people. The 1980s is known for introducing female characters who were independent and functional as full characters in their own right instead of always being the “love interest” for the men.

While Cyteen is the Hugo Award Winner, I feel that you should start with Forty Thousand in Gehenna since it precedes Cyteen chronologically in the series. The two books can be read independently of each other and be fully understandable, but it works better if you read the two together.

Unionside Series of the Alliance-Union Universe