Louise Cooper began writing stories at a young age, more to entertain her friends than for any other reason. She was not fond of school and would tuck herself away to write stories in the classroom. At the age of fifteen, she persuaded her parents to allow her to quit school altogether and they agreed to it! She never looked back.

Cooper wrote her first novel when she was still a teenager and it published when she was twenty years old. She moved to London in 1975 and took a job in publishing before moving on to become a full-time writer in 1977. During her life, she has published more than eighty fantasy and supernatural novels, both for adults and YA.

She married Cas Sandall and they lived in Cornwall, England with their black cat, Simba. Cooper loved music, folklore, cooking, and gardening. In 2009, Cooper unexpectantly died from a brain aneurysm.

“Hope…which is whispered from Pandora’s box only after all the other plagues and sorrows had escaped, is the best and last of all things. Without it, there is only time. And time pushes at our backs like a centrifuge, forcing us outward and away, until it nudges us into oblivion.”
― Ian Caldwell, The Rule of Four

Nemesis is a modern retelling of the ancient Greek myth of Pandora’s Box, but with a Celtic twist. Anghara Kalingsdaughter, Princess of the Southern Isles, is an impulsive, headstrong girl in her teens. She is content with her life and the man she is promised to marry but is jealous of her younger brother who will inherit the crown because he is male.

The kingdom is built on the rubble of an ancient civilization. All that remains is a solitary tower built by a people whose name is forgotten. Her people’s oral tradition sang warnings of the danger presented by the “tower of regrets” and give a reminder of the folly of attempting to take to much from the Earth Mother. With each passing generation of her people, those warnings grow fainter and why the tower is forbidden is also forgotten, shrouded in mystery.

One day the princess is riding near the forbidden tower and her inner curiosity propels her to question why the tower of regrets is forbidden. Due to her youth and recklessness, Anghara enters the tower and discovers a box in the center. She opens the box and is horrified when seven demons spring forth and are released into the world.

The Earth Mother comes to Anghara, terrified and shamed by what she has unleashed. The goddess informs the princess that she must pay for her trespass by seeking out and destroying each of the seven demons. Until her mission is complete, she is made immortal and will never die. Her identity is removed, no longer is she a princess of the royal house. Anghara takes on the name of Indigo. It is the color of mourning among her people.

Newly transformed, Indigo sets off on her mission. She learns that her entire family has been slaughtered by the demons she has freed and her betrothed is condemned to a half-life in purgatory until she can rescue him. She is hindered by her nemesis, an evil copy of herself with supernatural powers. Indigo is joined by a companion, a talking wolf, who is her only friend as she hunts the demons based on the seven evils of Greek myth. Will she succeed in her quest to rescue her lover Fenran and regain her mortality? 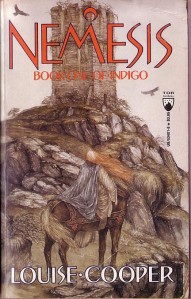 This was one of those books I discovered while I was an adolescent myself. I felt a strong connection to Indigo and her quest. The pace of the story was fast and each novel was unique in plot and the dangers that Indigo faced. Louise Cooper is better known for her Time Master series, but I feel that the Indigo Saga is equally as strong. I like the fact that it features a female protagonist who faces challenges more with her brain than with brawn. While the novels are considered YA, I feel that as an adult they are as enjoyable as they were when I was in middle school. I see more to the story now than I did when I was young and have a greater appreciation for the characters.

It is a hard series to find. The books have been out of print for many years and copies are hard to come by. I do not believe that ebook versions are available at this time. If you can find the books, they are well worth the effort.