Lady Mary Stewart was born in Sunderland, England, the daughter of a vicar. She graduated from Durham University in 1938 with full honors in English. While she hoped to become a university professor, due to World War II, jobs were very scarce and she shifted gears, got a teaching certificate and taught primary school instead. After the war ended, she went on to earn a master’s degree and was hired as a lecturer of English Language and Literature at the Durham University.

It was during her years lecturing at Durham where she met a fellow lecturer, a young Scot who spoke of Geology, by the name of Frederick Stewart. They married within three months of their meeting at a VE Day dance in 1945. When she was 30, Lady Stewart had an ectopic pregnancy that was undiscovered for many weeks and damaged her. She lost the child and was not able to have any further children.

In 1956, her husband became a professor of Geology and Mineralogy at Edinburgh University in Scotland. Instead of continuing to teach, Mary Stewart decided to submit a novel to publisher Hodder & Stoughton. They accepted her book and it was an immediate success. She continued to write in many genres such as romantic suspense, poetry, and her famous Merlin Series which is a mix of fantasy and historical fiction.

Mary Stewart was a popular best-selling author throughout the 1950s through the 1980s. Her novel The Moonspiners was made into a Disney movie. After T.H. White produced his book The Sword in the Stone, Arthurian legends became popular. Mary Stewart soon after published The Crystal Cave and it was a huge hit. In the 1990’s it was adapted into a BBC TV series called Merlin of the Crystal Cave and starred Robert Powell as Ambrosius.

In 1974, Frederick Stewart was knighted and Mary became Lady Stewart, although she did not often use the title. She and her husband lived happily in both Edinburgh and Loch Awe, Scotland and were avid gardeners and shared a love for nature. He passed on in 2001. Mary followed him in 2014.

“The gods only go with you if you put yourself in their path. And that takes courage.”
― Mary Stewart, The Crystal Cave

Arthurian legends normally are told via the perspective of King Arthur. The Crystal Cave takes a departure from this trend by following the life of Merlin the Wizard or as he is called in this tale, Myrddin Emrys.

Myrddin begins his story when he is six years old and follows him until he is a young man. The Romans have departed Britain and it is now divided into many smaller kingdoms, loosely united under a High King. Myrddin is the son of a Welsh princess who declines to name his sire. He is small for his age and often neglected. He also has clairvoyant visions. This second sight causes him to be called as “the son of a devil”. He is educated by a hermit named Galapas who teaches him how to use his psychic talents and creates in him a young man of many intellectual talents in a age when brawn and fighting with a sword is more prized. Eventually, Myrddin finds his way to the court of Ambrosius Aurelianus of Brittany. Ambrosius wishes to invade Britain and become its High King. With him is his brother and heir, Uther.

When it is revealed that Myrddin is Ambrosius bastard son, he must leave the court. He returns to his home, only to discover that his teacher Galapas has been killed. He is captured by Vortigern, the usurper king of Britain. The usurper is building a fort, but the land is unstable at the chosen location and the walls tumble on a regular basis. Due to his education, Myrddin realizes that the walls fall because of a series of caves that are directly beneath the fort, but he informs Vortigern that the problem is due to dragons living in the ground. Soon after this, Amrosius invades and defeats Vortigern.

Myrddin uses his engineering talents to rebuild Stonehenge, but while doing so, he has visions of his father’s death. When a comet appears and Ambrosius dies, his half brother Uther Pendragon takes the throne. 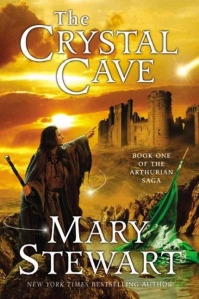 I stumbled onto Mary Stewart’s Merlin books in college. I loved Sword in the Stone and later Mists of Avalon, so another series of books about King Arthur and his knights was very welcome. I was surprised to learn that The Crystal Cave followed the original story of Merlin instead of Arthur. Stewart did an amazing amount of historical research to bring her novels into line with the original legends. She created a more organic and natural Merlin, an educated man, than wizard. The bringing in of psychic arts and druid religion gave the stories just enough of a fantasy touch to set them apart. It is a classic tale that has stood the test of time. If you love Arthurian legend, this is a series for you.