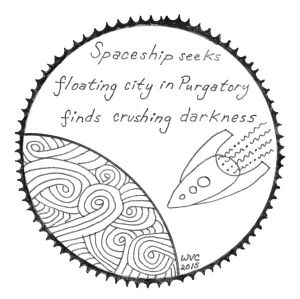 One Friday afternoon, I was sitting on a bench at a local science fiction convention with little to do for the next few hours. I learned that there was to be a workshop on how to write scifaiku poetry put on by the Science Fiction Poetry Association.

I had never heard of scifaiku before and was intrigued by the idea. I ended up attending the seminar and this decision changed my views on poetry. As it turned out, I was the only student at the workshop along with a couple of magazine editors that published this form of poetry. The instructor taught how to brainstorm ideas for your poems and the elements that were needed for proper scifaiku. I not only became hooked on the poetry form, but I ended up publishing the poem I wrote in that workshop several months later.

Scifaiku is minimal in execution and elegant, similar to haiku. It is distinctive since it contains the human insight, use of technology and vision of the future that is natural in science fiction, but delivers it in three short poignant lines. The form is inspired by the principles of haiku, but it deviates due to its science fiction theme. The standard length of a poem is seventeen syllables.

While traditional haiku has three lines of five syllables, then seven, and then five again, scifaiku does not need to follow this structure. The structure is merely a guideline in Scifaiku and the poet can write more than seventeen syllables if they wish. This is due to science fiction having technical terms that make the shortness of traditional haiku difficult.

How to write Scifaiku

Scifaiku contains certain theme elements, much like haiku does. In traditional haiku, the poems are about nature. In scifaiku, the poems are about science fiction. Each poem needs to evoke a science fiction premise along with its own observation of that idea. For instance, you might include a technological word like space, laser, nebula, biofeedback, or teleport. Technical words often can be long and have many syllables, but this is allowed in scifaiku.

In traditional haiku, a word is included to indicate the season or time this poem is taking place in. I was taught in the workshop to also include this element in the scifaiku poem. It is not a requirement, but I am finding that including it makes my poems stronger. I tend to not use seasonal words, but I do like to use words that give a sense of the time.

Haiku and scifaiku both involve creating a sense of a single moment in time and space. You need to discover that tiny moment and the feelings that it invokes within yourself. Scifaiku is about creating a tiny bubble in the universe that makes one consider the human condition.

When I am ready to create a limited series of scifaiku poems, I take out a notebook and create three columns. One column is where I write down ideas of science fiction concepts I might want to compose poems. The second column I list moments of time. The final column is where I write down ideas of feelings that could be evoked. From these lists I begin to mix and match the three concepts to create different scifaiku poems. I pick the three best to create a sequence to send to magazines. Each of the three scifaiku poems can stand on their own as singles, but together they touch on a theme that unites them. These clusters of poems are what end up publishing. Scifaiku is such a short form of poetry that most magazines appreciate having a couple of them together to flesh out a single presentation page.

Where to Submit Scifaiku

I tend to write scifaiku in a small series when I prepare them to be submitted to magazines. Each of the poems is related via subject matter and work together, but also can stand separately. Each series is three to five poems in length. This gives the magazine a little more to bulk out on the page since scifaiku is such a short form. Most science fiction magazines do accept poetry submissions, but not all will accept scifaiku due to its brief format. You should read the magazines you wish to submit to and learn their publishing guidelines before sending in your work.

There are few awards for scifaiku. It is a rare form of science fiction inspired poetry and often will not be eligible for recognition in regular poetry awards. However, The Science Fiction Poetry Association gives out a “Dwarf Star Award” for the best short length speculative poem each year which does include Scifaiku. The nominees for the award are published in their annual anthology, Dwarf Stars. Joining the Science Fiction Poetry Association allows you to nominate and vote for the award in addition to giving you a copy of the anthology.

Scifaiku is a poetry form that I’ve grown very fond of. It is my hope that more people will begin to write it and that it will flourish as an art form. From a single seminar on a lazy Friday afternoon, I have been transformed into a poet of sorts and my life has become all the better for it.

3 thoughts on “Scifaiku: A Poet’s Journey”

According to Author Max Griffin, Ray Bradbury once said, "I don't tell anyone how to write and no one tells me." Yet, when pressed, he produced eight "rules" for successful authors.
It is the final day of voting for the Elgin Award. Thank you to all SFPA members that downloaded my book and gave it a read.