Walter Farley was born in 1915 in Syracuse, New York. His uncle was a professional horseman and took the young Walter under his wing. He taught him about horses and training methods that were used on the world racing tracks. Walter spent a great deal of time with his uncle at the Belmont Race Track and stables. Many of his future novels would be set in this racing complex.

Farley was a high school student at Erasmus Hall High in Brooklyn when he began to write the first Black Stallion novel. As he continued his education at Columbia College, he completed and published The Black Stallion in 1941 when he was still an undergrad at the university. The book was a success and Farley was ready to write sequels, but World War II intervened. He was forced to set his stories about Alec Ramsey and the Black aside and instead worked for the US Army magazine Yank for the next five years. It would not be until the end of the war that Farley could return to his first love, writing about horses and the racing world. Altogether, Farley would write 21 novels about his beloved horses and would become renown as a young adult author.

Farley and his wife Rosemary had four children whom they raised on a farm in Pennsylvania and later in a beach house in Florida. The love for horses was passed on to his children and in one, his son Steve, the love of writing.

In 1989, Walter Farley was honored by the Library in Venice, Florida by the creation of the Walter Farley Literary Landmark in it’s children’s wing. Soon after, Farley died of cancer in 1989. He would not see the completion of the Young Black Stallion book or the start of production of the television series The Adventures of the Black Stallion.

There was also a famous Francis Ford Coppola film The Black Stallion, which features some of the most beautiful cinematography featuring an Arabian steed, a beach and a boy taming the heart of a horse. It stars Mickey Rooney as the old trainer and is well worth looking into as a family-friendly film everyone can love.

“His mane was like a crest, mounting, then falling low. His neck was long and slender, and arched to the small, savagely beautiful head. The head was that of the wildest of all wild creatures- a stallion born wild- and it was beautiful, savage, splendid. A stallion with a wonderful physical perfection that matched his savage, ruthless spirit.”
― Walter Farley

The Island Stallion Races is an unusual offering by Walter Farley, his only science fiction novel. The story returns us to Azul Island, a tropical paradise with a hidden secret: Inside the ancient walls of this extinct volcano is tucked away the last outpost of the Spanish conquistadors where the descendants of their powerful steeds still roam. Young Steve Duncan and his scholarly friend Pitch have discovered the secret of Azul Island and Steve has befriended the mighty stallion Flame who guards his herd and keeps them safe.

Pitch is called away while the pair study the ruins left by the Spaniards on the island and Steve is delighted to have more time with his favorite horse, a fire red steed that he longs to race so he can show off Flame’s speed and grace to the world. Alas, it is not to be. Flame has no pedigree or papers. He is barred from racetracks due to this defect.

Enter a pair of supposed “Eastern American Business Men” who are anything but. Jay and Flick arrive on the island via unconventional means: An intergalactic spaceship. They have unusual talents such as transforming into birds when they wish. Their mission is to watch over the invisible spaceship that has been parked on the remote island while their colleagues Victor and Julian are off studying human culture.

Jay would like to do more than simply study humanity. He has watched the beautiful horses of Azul Island for a long time and is interested in experiencing horse racing for himself. He concocts a plan to take Flame and Steve to Havana, Cuba via their invisible spaceship and enter the Island Stallion in the Grand International horse race.

Does the Island stallion have what it takes to beat the best race horses on the planet? Will Steve overcome his fear of the aliens in order to pursue his dream of being Flame’s rider in a major racing event? Will Jay the intergalactic alien get away with his reckless behavior or will his comrades leave him behind when it is time for them to depart Earth?

You’ll have to read the adventure to find out. 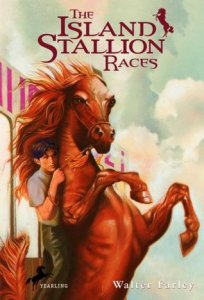 One of my favorite series, when I was a pre-teen were the Black Stallion novels by Walter Farley. I had quite the crush on young Alec Ramsey and identified with his love of horses since I had a similar love for my own horse at that age. The Black Stallion novels are quite famous.  The series is being continued by Farley’s son Steve Farley to this day.

There is a second series of books written by Farley featuring another mighty horse. There are only five novels in the series about Flame the Island Stallion and his rider, Steve Duncan.  Each one a well written YA adventure featuring a beautiful steed and the boy who loves him.

Although the Island Stallion books were written at the same time as the Black Stallion books, I put off reading them. I loved the Black and Alec so much, I felt a sense of youthful disloyalty to read about this other horse. Much to my surprise, when I finally gave in to my curiosity, I found that I enjoyed these books as much, if not more than the original Black Stallion books.

Azul Island, a walled paradise tucked away in the tropics and home to the beautiful equine descendants of the conquistador warhorses tickled my fancy with delight. Then, there was a second easter egg. The Island Stallion Races featured aliens from another world and their nefarious mission: horseracing! To my disappointment, the author never continued his science fiction ideas and this single offering is his only sci-fi novel. The storyline was enough to make this particular Walter Farley book one of my favorites. (Sorry Alec)

I would love to see the Island Stallion stories made into movies as the Black Stallion books were. The stories are every bit as compelling as the more famous works by Walter Farley. If you are looking for science fiction in an unexpected place, give The Island Stallion Races a try. It is a family-friendly book that will make you and your horse-loving child smile.