Futurology, the practice of forecasting technology and society, is akin to the morning weather report. While some of the methodologies can lend a hand in predicting the future, they can be laughably incorrect in hindsight. If you are crafting a believable future or sci-fi version of the world as a fiction writer, some key observations are essential. Notice I say “believable” sci-fi. Sometimes the most accurate vision of the future may not be the most creative space to write for or be fun to read. Our 2016 isn’t riveting compared to some previous imaginings. Instead, writers should construct a solid foundation so readers can immerse into the setting. Sci-fi is based in what-if scenarios, and it’s the writer’s job to answer intelligently. No reader or viewer wants to feel smarter than the author/screenwriters and get pulled out of the experience.

If the entire piece hinges on an unbelievable concept, the work will suffer. In the 2014 film Lucy, the plot depends on the misconception that humans only use 10% of their brains, when people really use it all and only 10% at a time. Any person with this knowledge will not able buy into the movie. Writers and readers beware.

Comedies have more leeway in the concept category. Idiocracy (2006) says that humans of lower I.Q. are producing more children and as a result, the population will become stupider over time. The movie convinces the viewer with anecdotal evidence. A 100 point I.Q. man gets locked in a time capsule and awakens to discover he is the smartest man alive and hilarity ensues. There are many reasons why this can’t happen and certain tasks like construction require a basic level of know how, but since the idea that dumb people have more kids at least feels real, we buy into it. Since comedies often create unlikely what-if scenarios in all genres, we are more likely to forgive such things in future-based stories as well.

The purpose of the sci-fi is to serve the story not predict the future. In the 1989 comedy Back to the Future Part II, we are treated to spectacle. Their 2015 is meant to provoke awe with hover-boards and flying cars but it also is supposed to be funny. The film took things that felt real like endless sequelization and absurd style and turned them into jokes. Even though we don’t wear our pants inside out today, it echoed the ridiculousness of the 80s. It depicted inevitable things such as video calls but also gave us self-drying pants that tell you, “Your pants are now dry.”

We have the capability but no self-drying pants. Its creation was not driven by what drives industry. For consumer electronics, that’s capitalism. Companies make what people buy. Pants are already cheap, easy to use, easy to make, and are available. There’s no practical reason people would make the change. Emotions drive capitalism too. Nostalgia drove Nike to create a limited run of self-tying shoes from Back to the Future Part II. Just because electronic scissors can be made doesn’t mean it belongs in sci-fi novels. Whenever considering tech to put in fiction consider if a mundane object can be made better and whether it would be worth it.

Government also propels technology. To what degree versus capitalism varies on the reality set forth in the fiction. The government may not resemble what it is today, but people will organize and money will be there. Think about what drives such organizations to make technological advancements. The threats of being destroyed via war or its own people are safe bets.

Past history applies to new worlds. Things that may have prominence in the past will reoccur given the right conditions. Piracy, church power, and colonialism are just a few examples. If society is advancing, so are electronics and medicine. But before adding those elements into your fiction, consider your society. Ancient peoples such as the Greeks applied the scientific method to medicine. Centuries later, Europeans moved backward making leaps in logic based in superstition. As a result, their medicine was less advanced and even lead to people’s deaths.

Also consider what impact any piece of technology has on the world. Think of what effects the smart phone had on the world. Does the tech have a secondary use? Does it drive another industry legitimate or otherwise? Do people behave differently now that everyone has a camera in their pocket?

Don’t write technology that solves everything. Stories need stakes, and the more limitations or the higher the cost, the more drama is added to the situation. In Elysium (2013), a medical capsule heals anyone to 100% with no repercussions. No resources seem to be expunged, and there are hundreds of them. The only reason stakes exist is because the antagonists don’t feel like sharing. A franchise that has tech add to the stakes is Mass Effect. In the video games, space travel is limited to traveling between waypoints called mass relays that launch spaceships from one and stop at the other. It’s a brilliant alternative to franchises that use hyper-drives.

When writing sci-fi, you are the inventor of a world. Imagine what tech your proposed society would create and how in turn the tech would alter them. If you make it compelling and believable, you’ll have the basis of a great future-world fiction at the tip of your pen. 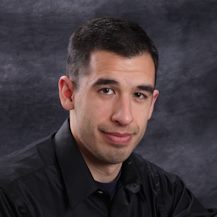 J Bryan Jones authors, screenwrites, and creates graphic novels. J first pursued the sciences before turning to writing, earning a Bachelor of Science at the University of California –Davis and working several jobs as a research field technician. Looking back at his childhood constructing elaborate stories with his brother (@Raz0r13), he’s not sure why it took him so long to consider a career in the creative arts. Most of his work consists of contemporary fantasy and near-future science fiction. His novelette Our Silicon Souls earned an honorary mention in the prestigious Writers of the Future contest. First Publishing Rights are available.

J can currently be seen operating the Long Beach Chapter of Coffee House Writers Group and acts as the Director of New Media. He hosts, edits, and produces the CHWG Podcast which holds conversations with members of the writing community, conversations on writing topics, and Shop Talks giving advice on writing. Available on YouTube, Soundcloud, and iTunes.

For Coffee House Writers Group visit chwritersgroup.org. They hold critique groups in California in the cities of San Dimas, Long Beach, Anaheim, and Claremont that can be found on meetup.com. Follow @chwritersgroup on Twitter and like on Facebook.

Leave a Reply to The Story Reading Ape Cancel reply