Author Che Gilson likes to make the small epic and the epic small.  She is a YA fantasy author from the Pacific Northwest.  Please welcome her on No Wasted Ink.

Hello! My name is Che Gilson and I write things and draw things. Some of those things get published which is really, really nice. I also love to draw and paint. I mostly work in watercolor and who knows- perhaps you’ll see my work in the art show of a fantasy convention you go to! I’m also quite the nerd. I love TV, movies, manga, anime, and reading. I collect Asian Ball Jointed Dolls and one of my current goals is buying a smart phone so I can play Pokémon GO… and also so I can get a credit card reader for conventions… but mostly Pokémon…

I’ve been creating stories since I was a child. I loved the writing prompts in English class and I loved to read. My original goal was to write and draw my own comics but in art school, I discovered my attention span for comics lasts about 12 pages. I then wrote some graphic novels but unfortunately had difficulty finding an artist to work with consistently. It didn’t help when Tokyopop shut down either. So I began to write more and more prose. It was something I’d done all along, but I finally really decided to work at it because it was the only way I was going to be able to tell MY stories, no artist required.

I’m not sure. I think I felt ‘officially’ like a writer when I wrote Avigon my first graphic novel, illustrated by Jimmie Robinson. I finally had my name on something and that something was in stores. That was the first real success I had getting my words out in more than a zine.

Can you share a little about your current book with us?
Aside from my usual line about Tea Times Three being a book about tea, witches, yummy food, and small towns. I really consider it a book about a town. I made up a fictional Maine town called Midswich. I picked Maine because it’s not a populace state and because I have an obsession with the East Coast even though I’ve only been to New York city once in high school. But the East Coast looks as close to Europe as you can get and originally I had wanted Tea Times Three to be set in England. I made Midswich a tourist town that had designed itself to look like a British village. I got the idea from Solvang, a Swedish styled town in California. There are multiple POV characters, magic, and a hint of romance.

FOOD! This book is my ode to all the food I can’t eat anymore because I am allergic to everything! Other ideas went into it as well. I love what I like to call “Eccentric British Village Comedies” though all my examples of this ‘genre’ are American or Canadian. TV shows like Northern Exposure and Corner Gas. Things that revolve around small towns and shenanigans where everyone pretty much knows everyone. I also adore witches. I joke that my default mode is “witch”. And tea which aside from water, is my favorite beverage on earth. It’s pretty much the only thing besides water that I drink. So I put into Tea Times Three all the things I love, food, small town shenanigans, tea and witches.

Originally I had planned Tea Times Three as a comic book set in a little English village and the witches were much younger. I was aiming for a Middle Grade audience of kids 9-12 and maybe some shojo fans. But then Tokyopop folded and I had to re-imagine it as something else entirely. It took several years and some sage advice before the novel version clicked in my head and I started writing it.

I strive for clarity in my writing. I’m not sure that’s a style, but that’s the approach I take. I want the writing to be clear, I want the characters to be interesting, I want to express myself in a way that is easily understood. I hope it’s interesting and I hope people enjoy it and that’s really what I want.

That was really simple. I used the name of the tea shop the three witches open in the town. Tea Times Three. And if I’m being utterly honest the name of the tea shop is a nod to Charmed the TV show. Piper opens a club named P3 which was a reference to the sister’s “power of three”, and their names which all began with “P”. This is actually the super nerd origin of the title I’ve never told anyone else!

One of the major themes in Tea Times Three is tolerance and intolerance. The majority of the town is nervous when witches move in and it takes a few people standing up for them for people to start changing their minds.

Not especially. Though I put a lot of myself into my books. I tend to give my characters all my worst personality traits and then make them bigger (the traits, not the characters). Or I give them personality traits I WISH I had, like optimism! Though I do know what it’s like to move into a new town and to live in small towns. All the food in Tea Times Three is either based on things I’ve eaten, or things I’ve seen on TV. One of my beta readers pointed out that I had described the flavor of Earl Grey tea wrong and in fact I had never drunk Earl Grey before. So I went to the grocery store and bought some. Turns out I LOVE Earl Grey and it’s become one of my favorite teas. I also rewrote my description of the flavor.

In college I took a creative writing class and the teacher kept telling us to read Raymond Carver. So I went to the book store grabbed a collection of Raymond Carver off the shelf, sat down and read. It blew my mind. The diamond clarity of the prose, the sense of so much going unspoken, the stories of small intimate, painful moments, took my breath away. After that I wanted to write like Raymond Carver. I did too, in as much as my smaller talents could manage. but It was another writer friend of mine who took a look at my prose and said “You need to describe things more, what the hell is this?” (I paraphrase). So for love of Raymond Carver I stripped my prose down to the bones, then after talking with that writer friend I started to build it back up again.

Yes! Suzanne McLeod. She’s a British urban fantasy author and you should go check out the Spellcrackers series! I met her through a Live Journal group for UF authors called Fangs Fur Fey. She posted that she was having trouble with her book and was looking for a cheer partner to swap snippets with. I had been working on Tea Times Three for awhile and was stuck on that manuscript as well. So I replied to her and we began exchanging bits of our books. We still email back and forth and encourage each other to this day! She has provided the most ridiculously good edits on some of my shorter works and has encouraged me to keep writing for years.

I designed the book cover for Tea Times Three, and my earlier urban fantasy novella Carmine Rojas: Dog Fight. Though for Tea Times Three I commissioned the hand lettering you see on the cover. The lettering was drawn by Courtney Kilpatrick of Typecast Lettering. I found her on Etsy. I had a very strong vision of the Tea Times Three cover, I even had the clip art picked out years before it was published. I thought I might have to self-publish and I wanted to be ready. Having the title handwritten was inspired by Bookcoverarchive.com which showcases the covers of literary novels and has an extensive gallery of beautifully designed cover work.

Don’t give up. But be ready to go with small presses and Indie publishing. Write what you want, what inspires you. If you love it chances are others do too.

You’ve probably heard this from other authors, but if you like a book leave a review! It doesn’t have to be brilliantly written. A simple “I liked it.” is great. Small press and Indie authors live and die by the kindness of readers. 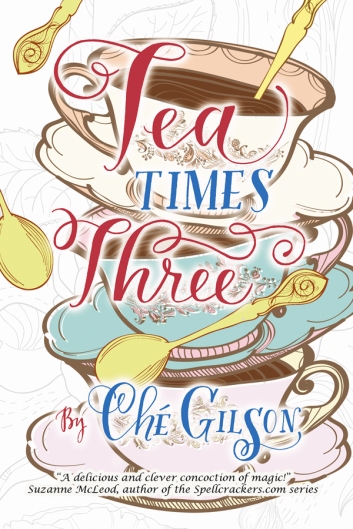