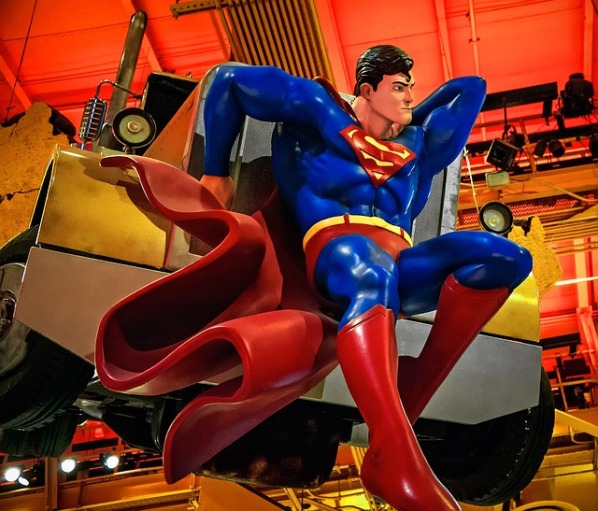 I can’t think of a better character to explore than my favorite, Superman, particularly with Batman v Superman currently in theaters.

Everyone knows that Superman (who first appeared in Action Comics #1 in 1938) was created by Jerry Siegel and Joe Shuster. That year they were paid a “kill fee” of $130, signing over all their rights to the character and story they had been developing for five years. This was a significant sum back then for two young men from immigrant families.

Knowing the genesis of Superman, helps us understand why people embraced this character then and why Superman endures. The following historical information about the creation of Superman comes from Arie Kaplan’s From Krakow to Krypton: Jews and Comic Books.

Superman’s creators, Siegel and Shuster, came from Jewish immigrant families. Jews in that day were seen as weak, a minority that faced persecution. In the United States the comic book industry, like the movie industry, offered opportunity. So, Siegel and Shuster tried to break into the industry, envisioning an immigrant (an illegal one, as it turns out) who epitomized their aspirations – a superman, who falls in love with an American girl, just like they hoped to.

They gave Superman a Kryptonian name, Kal-El, which in Hebrew means Voice of the Lord. (That’s both a statement and an inside Jewish joke that’s been a point of pride to many a Jewish kid reading or watching Superman.) Creating Superman, who fights for truth and justice was more than a story for them. Superman was written at the beginning of World War II, at a time when the Third Reich’s genocide policies against Jews, gypsies, trade unionists and anyone who they labeled as a threat, were being enforced.

They wrote during the cusp of the beginning of World War II, where anyone (such as Jews, gypsies, homosexuals, even trade unionists) the Third Reich chose to claim as a threat to making their nation great was targeted. Thus, a superhero who fights for truth and justice, was more than a mere story for Siegel and Shuster.

Siegel and Shuster, like other comic writers and artists of the day made Nazis the villains at a time when the American public was often enamored of the rhetoric. They and many other Jews in the Gold Age of the comics helped change that perception through their stories of Superman and other heroes, preparing Americans for seeing Nazi Germany’s evil.

Even though Superman was written during a turbulent and horrible time in history, he still endures. So, why do I love Superman? Why do I think so many others do, too?

Perhaps we secretly wish we were Superman. Not necessarily that we want to be a hero, but that we know we have a secret identity – one that we know is the real us. Maybe we know deep down we have a gift, a power, which when we talk about characters is called “agency.” This may not be a superpower like the ability to fly faster than a speeding bullet, but still the power to make the world a better place in our own way (through what each of us does to help others).

Perhaps, it is something else. From the perspective of an author who writes speculative fiction, thinking about the character of Superman’s appeal, he’s not invulnerable. At key times he depends on Lois Lane or an average person like Jimmy Olsen to save him from exposure to Kryponite. He also has human frailties. He’s suffered personal loss. He’s lost his adoptive father, Jonathan Kent, and his biological parents – even his home world, making him the ultimate orphan, a classic aspect of those on the “hero’s journey.”

Better yet, Superman has great duds. I really like the red cape. Okay, I’m not a fan of Clark Kent’s glasses, which I guess are intended to make him look smart. Superman’s costume is red, yellow, and blue, which might have been better as red, white, and blue, except for the fact it likely would not have looked quite as good in the comics…

But I digress, the costume itself makes Superman bigger than life, suggesting the Man of Steel is a knight in armor in the modern day. What I mean by that is more apparent in Man of Steel. In that film, the costume literally is Kryptonian body armor. There’s also resonance in him being a knight, as an aspect of his character. He’s a defender of the weak, not unlike the ideal knight or samurai.

That’s always inspired me – just as seeing Superman fly on the movie screen does.

That’s a take away for me as someone who creates characters. I believe that in order to create a memorable character there should be something inspiring about them. Like the rags to riches tales of Cinderella, who appears in a variety of cultures in their folktales, Superman is a small town boy, who becomes the ultimate prince – someone who could almost be any of us with such hopes and dreams.

Another way to look at such resonance is to think of Superman as mythological. He’s godlike powers and emotional human frailties. Think of Hercules, a demi-god, who has amazing strength and fights the good fight on behalf of humanity against evils, human or monstrous. Tapping on the resonance of such old tales makes Superman’s stories feel truer somehow, more epic. That makes for strong story-telling, which comes from creating a wonderful protagonist.

D. H. Aire has walked the ramparts of the Old City of Jerusalem and through an escape tunnel of a Crusader fortress that Richard the Lionheart once called home. He’s toured archeological sites that were hundreds, if not thousands of years old… experiences that have found expression in his epic fantasy series with a science fiction twist, Highmage’s Plight and new Hands of the Highmage Series. The seventh and concluding book of his Highmage’s Plight Series, Paradox Lost is being released in 2017.

An Author of eleven fantasy and science fiction novels, including those in the urban fantasy Dare 2 Believe Series and the space opera Terran Catalyst Series, Aire’s short stories appear in a number of anthologies, including in Street Magick: Tales of Urban Fantasy. A native of St. Louis, Missouri, Aire resides in the Washington D.C. metropolitan area.

This article originally appeared at dare2believe.

One thought on “A Lesson In Character From Superman by D.H. Aire”