Bradbury was born in the mid-west, but his family moved back and forth between Waukegan, Illinios and Tucson, Arizona for most of his formative years. When Bradbury was fourteen, his family settled in Los Angeles, California and he remained in the Southern California area for much of his life. Bradbury was a reader and writer throughout his youth. He claimed that he was inspired by Edgar Rice Burroughs’ John Carter of Mars series and wrote a fanfiction based on those tales at the age of twelve. He credits this series as the inspiration for The Martian Chronicles and notes that he likely would never have written about Mars at all if it was not for his love of the Burroughs’ series.

Bradbury cited H.G. Wells and Jules Verne as his biggest science fiction influences, followed by Robert A. Heinlein, Arthur C. Clarke, Theodore Sturgeon, and A. E. van Vogt. As Bradbury matured, he drew more from the style and works of Alexander Pope and poet John Donne. When later asked about the lyrical nature of his prose, Bradbury replied that it came, “From reading so much poetry every day of my life. My favorite writers have been those who’ve said things well.” He also has said, “If you’re reluctant to weep, you won’t live a full and complete life.”

Bradbury did not attend college. Instead, he sold newspapers once he graduated from high school and spent much of his time reading. “Libraries raised me. I don’t believe in colleges and universities. I believe in libraries because most students don’t have any money. When I graduated from high school, it was during the Depression and we had no money. I couldn’t go to college, so I went to the library three days a week for 10 years.” Bradbury wrote Fahrenheit 451 at the UCLA’s Powell Library where he rented a typewriter in one of their study rooms. The rental rate for completing the entire novel was around ten dollars since the rental of the manual typewriter was ten cents per half hour. He preferred to write on a typewriter instead of computers because that was what he was used to.

Ray Bradbury lived at home until the age of twenty-seven when he married his sweetheart, Marguerite McClure. They had four children together. He was an active member of Los Angeles Science Fiction Society where he made his first connections in the writing community of Los Angeles. From these connections, he began to meet publishers and gained a following for his work that now spans the globe. Bradbury is credited with writing 27 novels and over 600 short stories. More than eight million copies of his works, published in over 36 languages, have been sold around the world.

In his later years, Ray Bradbury became a well sought out speaker at literary events in the Southern California area. He never obtained a driver’s license and did not enjoy travel. It was well known on the speaker circuit, if you wanted Ray Bradbury to speak at your event, you should arrange to have a driver come and get him. I regret that I did not take the opportunity to meet Mr. Bradbury in person before he passed away in December of 2011. He was a favorite on the literary speaker’s circuit in Southern California and I personally know many writers that consider him to be an inspiration.

“Science is no more than an investigation of a miracle we can never explain, and art is an interpretation of that miracle.” – Ray Bradbury, The Martian Chronicles

The Martian Chronicles is a collection of short stories based on the colonization of the planet Mars by people fleeing from an atomic devastated Earth. There is conflict between the aboriginal Martians and the colonists as they adjust to life on the new world. The stories are tied together by short vignettes, creating a loose novel in three parts.

The first third of the book tells of the first attempts by humans to land and explore on Mars. The native Martians endeavor to prevent them from returning. In the fourth story _And the Moon be Still as Bright, it is discovered that the Martians have been decimated by a plague brought by the humans, much the way that the American natives were brought down by European disease by the conquistadors. This sets the stage for the second part of the book when the humans colonize the deserted planet and set about making it into a second Earth. The final part of the book occurs after a global nuclear war on Earth cuts off contact between the two worlds. The few surviving humans that remain on Mars become the new Martians and the circle of life continues. 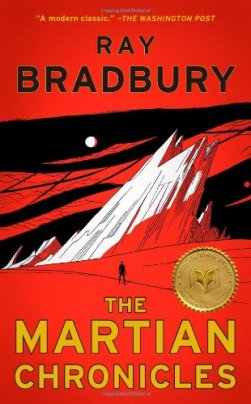 My first exposure to The Martian Chronicles was during the 1980s when the mini-series starring Rock Hudson came out in 1980. Hudson played one of the colonists from the fourth Martian expedition who later returned with his family to colonize Mars. I have never forgotten the scene when Hudson playing Col. John Wilder takes his children to a Martian canal and points at their reflection in the water. “There are the Martians.” He tells them. One day there will be humans to do this and not all that far in the future.

I have always loved the ERB series, John Carter of Mars, and between the two, a love for stories about the red planet has grown in me. After The Martian Chronicles mini-series, I made a point to seek out the original book. While I enjoyed the written stories, I think that in this case, I prefer the mini-series, although Ray Bradbury himself thought it boring! You can still see all three episodes today on YouTube. ONE TWO THREE

The science behind the stories is sorely outdated. Back when Bradbury wrote the stories, it was believed that Mars had more atmosphere and it would be more hospitable to human life. Today, we know that living on Mars will be much more difficult than simply getting there and setting up homes. We will need to combat a rampant CO2 atmosphere, low gravity and live without the protection of a magnetic planetary field. Still, this is a classic science fiction tale and several of the stories in the collection are well worth reading. My personal favorites are: “Rocket Summer”, “Ylla”, “-And The Moon Be Still As Bright”, “The Off Season”, and “The Million-Year Picnic.”