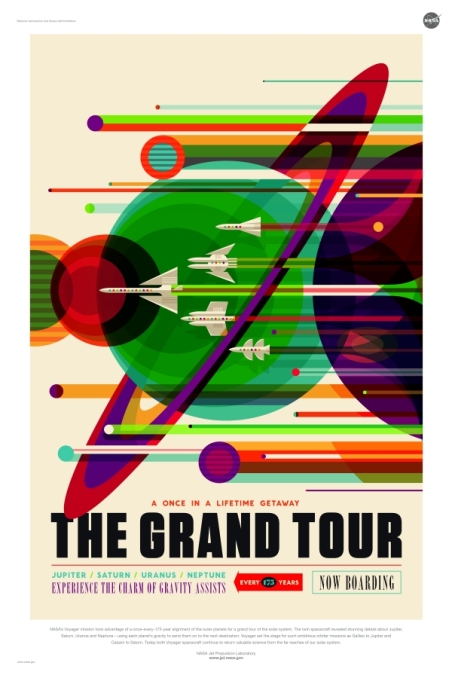 As a science fiction writer, I often derive inspiration from the planets and moons of our solar system. It is here that the next great frontier will be found. One day, tourism will be an economic factor on the planets much as it is here on the Earth. How will future destinations showcase their location to attract those tourism dollars?

One answer to this question is from NASA itself. In 2016, a series of 1950s inspired posters about various tourism locations in our home solar system were created. Photos and posters are great sources to draw on as an author. I hope you will enjoy this batch of fantastical images about various places in our solar system and how they might develop into colonies with tourism benefits.

Below are smaller versions of my favorite posters from this series. There are a few more featuring some of the larger moons in our solar system too. Download one or two for your walls for free. Maybe they will inspire you to write about the planets or even to go there one day. The days when humanity spreads into space is not far into the future. 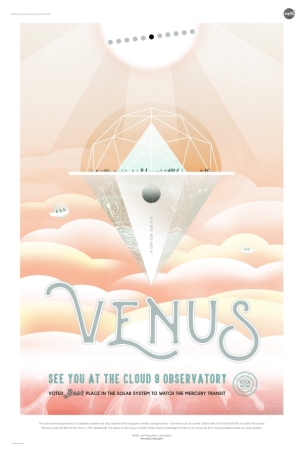 VENUS is one of Earth’s closest sister worlds.  It is 9/10s the size of our homeworld and has a dense atmosphere that could crush a spacecraft.

“The rare science opportunity of planetary transits has long inspired bold voyages to exotic vantage points – journeys such as James Cook’s trek to the South Pacific to watch Venus and Mercury cross the face of the Sun in 1769. Spacecraft now allow us the luxury to study these cosmic crossings at times of our choosing from unique locales across our solar system.” 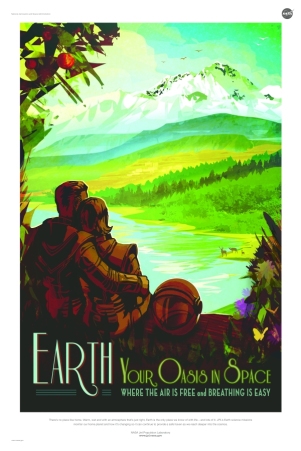 EARTH is humanity’s homeworld, but ultimately not our only gravity well.  Expansion into all corners of the globe is a fairly recent endeavor, but not our only stopping point.

“There’s no place like home. Warm, wet and with an atmosphere that’s just right, Earth is the only place we know of with life – and lots of it. Perhaps our perfect world is rarer than we thought and only when we travel to other worlds will we realize how precious and lucky we are to have it.” 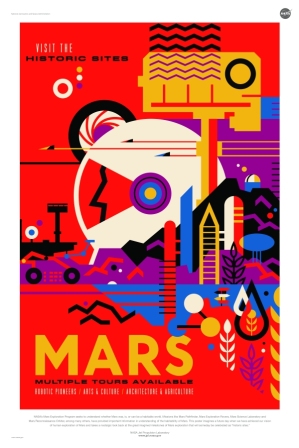 MARS will prove to be human’s first planetary colony.  Our first efforts to live on the Red Planet will begin in a scant decade or two.  Due to its smaller size, CO2 atmosphere, and lack of a magnetic iron core, there will be fierce challenges associated with living there, but I’m sure our scientists will be up to the task of making this world habitable.

“NASA’s Mars Exploration Program seeks to understand whether Mars was, is, or can be a habitable world. Mission like Mars Pathfinder, Mars Exploration Rovers, Mars Science Laboratory and Mars Reconnaissance Orbiter, among many others, have provided important information in understanding of the habitability of Mars. This poster imagines a future day when we have achieved our vision of human exploration of Mars and takes a nostalgic look back at the great imagined milestones of Mars exploration that will someday be celebrated as historic sites.”

JUPITER is a gas giant that orbits the sun, much as a binary star might.  It has snatched 68 asteroids that now circle the mighty orb as make-shift moons.

“The Jovian cloudscape boasts the most spectacular light show in the solar system, with northern and southern lights to dazzle even the most jaded space traveler. Jupiter’s auroras are hundreds of times more powerful than Earth’s, and they form a glowing ring around each pole that’s bigger than our home planet. Revolving outside this auroral oval are the glowing, electric “footprints” of Jupiter’s three largest moons. NASA’s Juno mission will observe Jupiter’s auroras from above the polar regions, studying them in a way never before possible.”

I hope that you have found inspiration for your own stories with these fun images from NASA. If they help ferment a few new science fiction stories for you, as they have for me, all the better.

The Elgin Award honors the best speculative poetry collection and chapbook of the year. A book is eligible for the award for two years after it is published. Hosted by the Science Fiction and Fantasy Poetry Association, this award is recognized world-wide by the speculative community.
I am the featured guest on "Line Break" a poetry short wave radio program hosted by TD Walker. If you don't catch the broadcast, the program will be uploaded to their website at a later time. The information about the entire program is below: