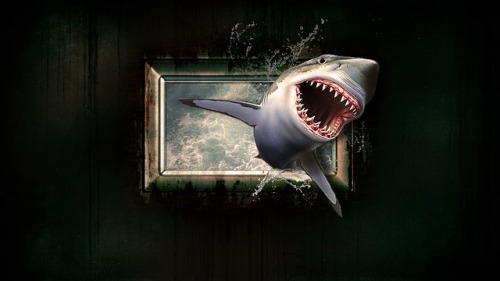 The following is an expression of opinions based on observations regarding the writing trade. They may be crappy opinions. They are my opinions and frankly, I may not even believe them completely myself. I try not to force my opinions on anyone.

There is a generally held belief that, in writing, or any creative endeavor, the cream of the crop rises to the top. It doesn’t matter that there is a plethora of content available to the buying public. It is commonly believed that things that are crap will sink.

As aspiring or even published authors, many creatives take comfort in this concept and work hard to perfect their craft, seeking to become known for their genius level skill set and integrity to the high road of ART. Many aspiring or even published authors are also working a day job whilst their less than artistically pure colleagues seem to be succeeding in spite of producing derivative garbage.

Surely the public wants higher forms of ART and they are merely unaware of your BRILLIANCE.

As a creative, you may have an entirely different, specific set of parameters by which you measure yourself. Different from whom? The paying public of course. And here is where we creatives get challenged in our perceptions. We think ART, but others think entertainment. The successful ones think, “Business savvy” and we keepers of the flame of integrity are sometimes left in the literary society dust.

In the writing game, the important thing to remember is that your perspective is not the one that matters. The masses chose the definition of “cream.” For example, Fifty Shades of Grey, Twilight, Sharknado, and Snakes on a Plane rose to the top. Arguably crap in terms of artistic merit, but in terms of the more valuable entertainment rating, they rock the world of the masses, those with disposable income. Perhaps those starving artist souls reading this might feel “flushable income” is the better term. But I bet most of you have read one of those books or seen at least one of those movies. You do not have to admit it out loud. I’ll join you in not admitting.

Understand that at the time of this writing Sharknado FIVE is released, for better or worse. Why? Money, of course.

Another way of describing this “cream of the crop” belief is to say, “If you build it, they will come.” Crap. If you believe this then the fickle public will certainly tread all over you in the rush to get access to whatever the newest highly promoted trend is that week. Now, I want to point out that this is one of those cynical moments where I make a statement that is harsh and dogmatic and later on try to retract or modify.

The fact is that sometimes, SOMETIMES, there is a moment when against all odds something gains momentum all of its own accord and proves to be an amazing artistic triumph that advances the causes of social liberty and human rights, motivating millions to take a new and unique action in their lives and adjust the world’s global karma. However, more often than not, it is something on the level of Angry Birds or Pokemon that attracts the audience.

In the not too distant past an author would sell their manuscript, receive a contract and soon an ad campaign director and a publisher would place a budget on a project, employ artists and copywriters to create a unique image or series of images to place in newspapers, magazines, on the side of buses, and often even billboards, alerting the public to the importance of your book. Well placed editorials and strategic marketing plans would create a place on Bestseller Lists or in “trending author” articles and you, the more-famous-by-the-moment-author and recipient of such attention, would get booked on PBS talking head shows, or perhaps if you were photogenic enough a spot on daytime talk shows like Dinah Shore or Merv Griffin. If you were witty and personable, Johnny Carson might even bring you on the Tonight Show (Yes, I am that old).

These days success is called Going Viral and relies heavily on algorithms called Bubble Sort and other interesting sounding titles (but really they are just counting hits) and placement of your brand and platform on the internet. It is all done by YOU unless you have a fair amount of money you wish to throw at this effort and can hire someone to do the work for you, results NOT guaranteed. It can all be exhausting. It can detract, discourage, and debilitate you into the status of permanent writer’s block. You can become sidetracked into this morass of externals and somehow never actually finish your books.

I know of at least two writer friends who excel at marketing. They have shiny websites that have won awards. They produce excellent blogs followed by thousands and display excellently reviewed sample chapters from their soon-to-come books. They garner rave comments from those who visit their website and read their blogs…but in over five years neither of them have moved a new word into their manuscript. Have they lost interest or just lost their creative way? Yet they have the appearance of success. They are keynote speakers at conferences, presenting their skills at marketing, social media, internet savviness, viralishness, and platform awareness stuff. They look real good, but there is no substance. At least to my perception.

To my way of thinking, if you wish to be called an author, you need to have written a book. All of the marketing gets to be important at some point, but…here is my opinion and it may be crap.

What you, as an author, need to focus on is creating the best product YOU can produce. Once you have that in hand, polished and finished, professionally edited and with a well-designed cover, then and only then is it time to focus upon making people aware of your best product. For the artistic individual, a person who is more than likely to be rather undisciplined or introverted, this gets tricky. You find yourself shifting from creativity to business acumen and often the two are polar opposites in terms of skill set.

The path to being a successful author is not one that can be completely defined and success can be a relative term. But there are two stages and it is important that creative souls face the reality early on that at some point they will find it necessary to get their work out there and sell their art. It is easier if the book, film, or any other creative endeavor fits an existing and recognizable-to-the-public genre. Selling a mystery series is easier than selling literary fiction, no matter how elegant your prose. People like mysteries (because good triumphs) and they like the same thing but different. Or maybe not so different. But they do like a well written, well-crafted mystery or romance or horror novel. And in that case, the cream really does rise to the top.

I sometimes think I am a snob when I look at the state of the creative business today. But at heart, I still recall the pure enjoyment of reading the old pulp novels from the thirties and forties (Reprints. I am not that old!). I admit, I have seen Sharknado (In my defense it was the Riff Trax version) and enjoyed the crude silliness of the dumb, stupid movie. But I have also seen My Dinner with Andre and Citizen Kane multiple times and even own the BluRay versions of each. I will watch those again and may even see another Sharknado film. I read higher quality these days than in my youth. Why? Am I such a better person for it? No. What I am is more experienced and less able to tolerate what is now, to me, predictable storylines. I want more from a book or movie. Most of the time anyway.

And when I write, I refuse to write downward.

I believe that a writer or creative of any kind can and should seek to show the audience the world in a better light or at least show that there is a path out of dark days of fear and the daily crap that occurs. And sometimes, at the end of the day, when the world is just heavy and the news is perpetually about confrontation and loss, I believe that a writer should entertain and brighten the audiences’ lives. A little well-written nonsense may be just the thing. And if you can make a buck or two while helping others rise out of the crap? Well, maybe I should just get off my high horse and keep my opinions to myself! I do have an idea for a funny zombie story… 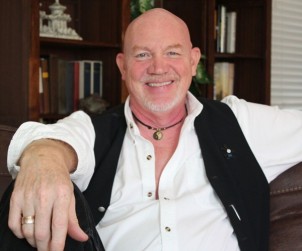 Jeffrey J. Michaels is a Gemini. As such he is deeply involved in whatever interests him at the moment. He describes his book “A Day at the Beach and Other Brief Diversions” as “metaphyictional,” combining fantasy and humor with metaphysical elements.

He is currently polishing a sweeping fantasy series of interconnected tales collectively known as “The Mystical Histories.” It is varied enough that he says he may even finish most of the stories.

In his real life he is a well-respected creative and spiritual consultant.
He does not like to talk about his award-winning horror story. 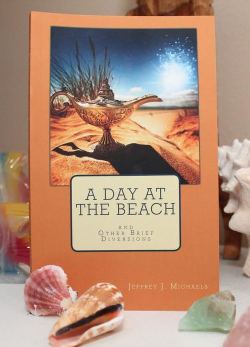 “A Day At the Beach and Other Brief Diversions”

What if… …your perfect day never ended? …your life were to pass before your eyes, one person at a time? …the genie in the lamp had a wish? …you heard the perfect last words? Versatile author Jeffrey J. Michaels invites you to explore new ways of looking at your world and worlds beyond in this selection of metaphyictional short stories.

2 thoughts on “Cream of the Crap by Jeffery J Micheals”