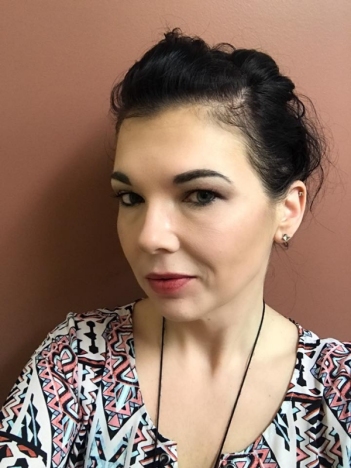 My name is S.L. Perrine, some people know me as Shannon. I am a wife, a mother, a medical assistant, and on more than an occasion, I write Paranormal books.
I grew up in Central NY, and have gotten many degrees. Some I’ve used for a short while trying to find the ‘practical’ career. Others I knew right away were not going to work for me. However, my Criminal Justice Degree and Psychology Degree, as well as my medical experience have helped tremendously with some of my stories.

I am Shannon. Although, I’ve never felt like a Shannon. Mostly because I’ve been a mom for eighteen years. I have a wonderful husband. I am a licensed Cosmetologist, Medical Assistant, and have an Associate’s Degree in Criminal Justice.

I would prefer to spend most of my time at home, other than work, that is. I try to make time to visit my friends and my parents at least, but I hate leaving my house, so nobody else sees me. That’s put a strain on my relationship with my siblings (I have nine). I’m trying to change that.

I like to read. I know, big shocker. I also enjoy crocheting, painting, drawing, and writing. I’m a huge fan of camping. If you follow my Instagram you would have seen lots of camping pictures last summer. This summer will be crazy, we’ve got a seasonal site and are buying a camper. Love to fish, and I bait my own hook. A country girl never leaves the mind, even if the body now lives in the city.

I don’t know that I have, or that I ever will. I think of myself as a creator. I create worlds and characters. I create stories and art. While most of my art is in the form of the written word, I do create graphics as well. I am also a web designer. So, with that said, I am neither. I’m a creator.
To me, a writer is someone who only writes. Maybe a poet or a journalist. I create.

Blood Rites begins the journey into the Crawford witch line. It tells the story of a young Seraphina Crawford, corrupted by anger and fueled by blood. She will do anything to keep her friends safe because they are the only family she has left. She goes against everything she’s been taught. The biggest betrayal, Do No Harm.

She kills, and with each kill, she gains powers to do what she thinks is justice, but is really revenge. When she finally realizes she may have gone too far, it might be too late for her. She may lose all that she worked so hard to protect. Her best friend, the love of two boys who compete for her affections, and the people she chose to lead.

My love of everything Wiccan, and the paranormal. I started the original story a few years ago and decided my readers needed to know how that tale came about. The original is a YA series, but The Blood Rites Trilogy is NA.

I enjoy showing my readers my stories. If Someone is going to lean against a wall suggestively, then that what I type. I like being descriptive, allowing the readers to imagine a scene in their mind as they go because that’s how I write it. I visualize everything as I write it out. I never plot a story or come up with an outline beforehand. I just sit, let the images come to me and type it out as they do. That way I’m just as surprised by the outcome as my readers are.

Blood Rites is named after the blood rite ritual my characters in The Crawford Witch Chronicles have to go through to get their full strength of powers and bind their coven. It’s a ritual that takes place after each of the members of the coven turns eighteen, during the winter solstice.

We are all human, and thus we make mistakes. Seraphina is just a child when she decides to take on the world. She goes about it the wrong way, but for the right reasons, and eventually makes amends for those mistakes.
We all make mistakes in life, but it’s never too late to make amends.

I’ve studied Wicca and witchcraft for most of my adult life. I have used what I’ve learned, and what I practice keeping the stories as accurate as possible.

Before I became a member of the indie world, being published and whatnot, I found Nora Roberts very inspiring. Though I was tired of the same old same old. Somebody found out something, meets someone, falls in love but fights it, gives in, finds out something that separated them, then eventually they made up and happily ever after was the ending.
Life and stories are not all the same. They should have a different makeup, or flow, making each one independent from the rest.

When I became published I found two women to be influential in my writing. The first, my publisher and fellow Author, Kindra Sowder at Burning Willow Press. She is a powerhouse. She has a full-time job and all the duties of running a company, but all those titles she has out is so impressive. I have strived to have the work ethic she has.
The other is my good friend, fellow Author and once a publisher, Nikki Yager AKA the Dragon Queen or The Dragon’s Rocketship. She has been my sounding board, my supporter and my friend over the last few years. I don’t know what I would do without her. Both, the Crawford Witch Chronicles and Blood Rites were the results of very long conversations. She let me bounce ideas off her for weeks when these series were just crawling into my mind.

I would say, Chad Dennis. He’s my imaginary friend. In 2012, we met playing an online war game. He told me he was a writer, and when I told him I was starting a book, he kept on me every day to write. Even a little bit. We both finished our books that year, but life got in the way for him. I know he’s back at it again, and hope one day I get to see the next masterpiece.

Write. Don’t say there is no time. Make time. Don’t say you can’t come up with an idea, just sit and let it flow. The idea will come to you. Even if the first thing you write is absolute garbage, and maybe the second will be too. However, if you want it bad enough, then the idea will come and the words will flow.

Without my readers, I would be doing this for the same reason I started, to just put the stories somewhere that others can see it. Now, I write for another reason. To entertain those who don’t have the imagination to entertain others. To give people hopes and dreams, love and loss, and above all else…Art. Writing is just another art form. A means of expression. I enjoy expressing myself for all of you, so thank you!