Writing novels inspired by the salty world she loves–the ocean is author Jenai M. Marek’s sanctuary. “You can be whoever and whatever you want on the waves … the sea doesn’t judge.”  Please welcome her on No Wasted Ink. 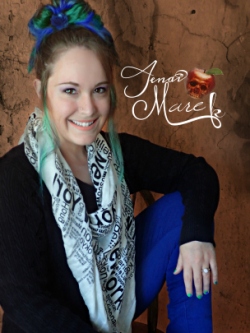 My name is Jenai M. Marek. I grew up in the Pacific Northwest, but am now settled in League City, TX, with my husband and four-year-old son. When I’m not writing or working with my indie publishing group, I enjoy surf, kayak, and offshore fishing. I’m also a member of a local pirate guild, the Railean Pirates, and annually volunteer at a local fishing tournament for breast cancer support, called the Sisters Helping Sisters. You could say I’m obsessed with the ocean. Not only for the sea’s real and scientific wonders but for the great unknown and mystical possibilities it may contain below the surface.

I’ve been writing since I learned how to arrange different parts of the alphabet into words. Though I have no memories of writing this, my mother could show you a handwritten book I wrote when I was two and a half called The Red Dress, which I illustrated myself and managed to write a cohesive beginning, middle, and end–a real rudimentary plot — about a red dress I wanted to wear.

I honestly don’t remember a time when I didn’t consider myself a writer. I think since I realized that writing, was a communication tool that circumvented actually talking to people, writing became my favorite way of expressing myself, and therefore, I’ve always just been a writer.

My next book in line to be published is the sequel to my Gup the Sailor pirate adventure novel series, called Gup the Sailor and the Devil to Pay. (I’m also working on a collection of personal narratives on living in an autism family, the latter of which I’ve said very little to anyone about, as it’s a very personal work in progress that I’ll probably not be releasing for another year at least.)

I would say books like Tom Sawyer; Anne of Green Gables; The Lion, The Witch, & The Wardrobe; and other imaginative adventure-driven stories, where intelligence, kindness, and fearlessness are the central themes and the books that inspired me to continue that tradition of writing children’s literature which sparks the imagination… and to write in such a way that the young at heart will also be compelled to dive into that story as well… I write specifically for my son, but there’s an overarching drive in my writing that hopes to reach out to the adventurer in us all. When I read the books that took me on emotional journeys, as well as logistical ones, I’d always found a much-needed escape from harsher realities in my own childhood, and I wanted to leave a legacy of that tradition for my own boy.

My writing style is to put myself into the head of a character, and just start telling his or her narrative. In my Gup the Sailor stories, I pretend I’m a young boy raised on a ship, by honorable freebooters, and just start typing out the story. It’s worked for me so far, but I’m not sure that’s so much a “style” as a writer’s coping mechanism.

I like to use idioms when I write book titles but write them with a twist that connects to the story or narrative. For example, my upcoming book is called Gup the Sailor and the Devil to Pay, which is the sequel to The Dangerous Voyage of Gup the Sailor. The first book, which did have a wrapped up conclusion, still left a small cliffhanger from which the second story picks up–and the idiom “there’ll be the devil to pay” actually fits nicely with the narrative to come. Most of the time when I write titles, they’ll have a pun, or a play on words, if not just be blunt for frank’s sake.

Not so much a message, but definitely a thematic spectrum: that courage, sticking to your guns, and doing what is right, not what is expected, are not going to be easy but is always worth it in the end. And that the right path for me is not always the right path for others–and that’s okay, too. Accepting life’s adversity and change for what it is, and maintaining a strong sense of self in spite of it, is a strength of character not nearly celebrated enough.

Not at all, but I assume a highly celebrated psychologist could explain the allegorical connection of pirates to my feelings about algebra.

Well, apart from Robert Louis Stevenson, Mark Twain, Lucy Maud Montgomery, and C.S. Lewis for obvious (and aforementioned reasons) I’m addicted to literary fiction from Ernest Hemingway, Banana Yoshimoto, Isabel Allende, Franz Kafka… to name a few. Mostly because each of these authors has a strong grasp of reality, that they’ve woven into a subtle fantasy that takes my breath away.

Not a writer, but a reader–my mother. She taught me to spell, read, and write before I was old enough to attend school. She’s a teacher, herself, and a specialist with special needs literacy and has a masters in literacy education. She read to me … a lot as a child. And though I struggled with dyslexia and social anxiety and awkwardness, my mother encouraged me to overcome my personal adversity to be the writer I wanted to be. Her encouragement helped me overcompensate for my shortcomings, and that makes her a better mentor than any other author out there–who may or may not share my struggles with basic socializing.

Oooh… this could be a whole other interview! The illustrator who designed my current book cover is no longer in my employ. I have a new illustrator, Holly Huffenberger, who is currently producing book covers for second editions, as well as working on the upcoming cover of my next novel. I chose her because her artwork has this wonderful playfulness about it that compliments the whimsy in my stories.

No, do you think other writers have any advice for me? I try not to give too much broad advice. I will say if there’s ever an author out there that feels they’ve come face to face with something that makes them want to give up, they are more than welcome to contact me for specific things I’ve done to avoid succumbing to defeat. Other than that, writing is as much a journey of self-discovery as any other journey. Nothing I can say without a specific prompt will really be much help at this point.

Read everything. And if it’s unreadable to you, put it down and move on. There’s so much out there, don’t let one bad story keep you from the next. (I’ve still not finished some highly acclaimed books, but I didn’t let my distaste for them prevent me from grabbing the next book–sometimes books by the same author, and discover I adore them!)

Gup the Sailor and the Devil to Pay