I wear a lot of different hats (metaphorical hats, alas—I look dreadful in real ones), and one of those is that of a private investigator. I became a PI back in 2002 as part of an early midlife crisis, and did investigations full time for about three years. I’ve been a part-time PI ever since (sometimes very part time) but I keep my hand in because it’s such a fascinating gig. It also, like my college teaching job, sometimes gives me an opportunity to do good things in the world, like help people who the system doesn’t much care about. This work has given me a lot of opportunities to think about the role of private investigations and security in society, both now and in the future—and my love of sci-fi, as a reader, viewer, and writer, has offered me a different perspective on the subject than most will probably share. I hope this article will offer valuable information and insight for those interested in incorporating PIs and investigations in their own writing.

I first want to say: a lot of people have some major misconceptions about PI work. For example, a lot of people think it’s all online searches now. Databases and social media are definitely useful, but in fact, one of the complaints I’ve heard from lawyers over the years is that a lot of PIs don’t want to leave the office. They’d rather sit in front of a computer doing searches, or maybe make some phone calls. But there’s still so much you can gain from visiting locations and speaking with people in person. These things won’t completely change as time passes, though the amazing aerial and street-level imagery in Google Maps is already reducing the need to visit locations. I still catch many things that require a detailed look, or perhaps a sense of a place in the nighttime, or during rush hour.

I expect the spread of Skype and Facetime and other similar tools will also make interviewing people from afar more effective. But the best interviewing allows you to see the subject’s whole body to see posture, gestures, shifting, and so forth. And the people you most need to see in person are the ones who likely won’t agree to Skype with you, anyway, so again: in person is just better. Other technologies will have a big impact as time passes, though, including drones, tracking devices, and cameras. All of them are getting a lot smaller and more effective, as well as cheaper and easier to use.

Databases are an especially interesting conversation. There are many that PIs and other professionals have access to that the general public does not. Unfortunately, the data is often outdated. This was a problem for me on a recent case, due to people moving frequently and not providing a forwarding address, or simply using someone else’s address. As time passes, however, I expect the databases will become more accurate and up to date, and offer more types of data. To what extent depends on how much the government decides it needs to track us, how much we choose to offer our information freely on the web, and how effectively the data companies figure out how to collect that data.

There are also some really important laws that affect how I do my job, including federal laws like HIPAA, FCRA, FERPA, and state laws involving video and audio recording, and GPS tracking, among others. These laws will continue to evolve, and new laws will be passed. In particular, I expect there will be a lot more laws about online harassment and monitoring over the next few years, but law enforcement is always shockingly and sometimes devastatingly behind the times when it comes to technology. This will continue to be an issue. Likewise, when considering the longer-term future, laws around robots and sapient programs will be problematic in many serious ways.

Another, more interesting question (not everyone finds federal laws interesting, for some reason) is why and when people will hire PIs. The answer to this in practice is that, if you’re not getting justice through the system, a PI can be very helpful to get the information you need to either pressure law enforcement to take action or proceed through the civil courts. In the future, depending on the world we end up with (or the fictional world you build), this will depend on the availability, competence, and priorities of law enforcement, as well as on the extent and quality of the electronic monitoring systems. PIs will also need to become better at technology, analysis, and interviewing—though that’s true today as well. I will be surprised if PIs don’t become a lot more important in the future, but in a strong society with low poverty and effective policing, they should be a lot less necessary–and that’s a future I hope to see.

Meriah Lysistrata Crawford is an associate professor at Virginia Commonwealth University, as well as a private investigator, writer, and editor. She has published short stories in several genres, a novella, essays, a variety of scholarly work, and two poems, and co-edited the anthology Trust and Treachery: Tales of Power and Intrigue. Her novel Persistence of Dreams, co-written with Robert Waters, will be released in 2018.

Meriah has an MFA in creative writing from the University of Southern Maine’s Stonecoast MFA program, and a PhD in literature and criticism from the Indiana University of Pennsylvania.

Her work as a PI, spanning over fifteen years, has included investigations of shootings, murders, burglary, insurance fraud, auto accidents, backgrounds, counterfeit merchandise, patent infringement, and missing persons. For more information about her work, including articles about writing, visit her website, connect on Twitter or Facebook.

3 thoughts on “Private Investigations in the Future by Meriah Crawford” 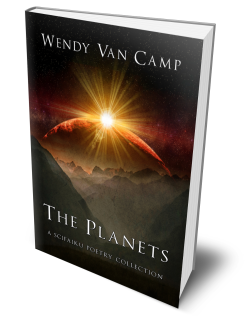 Keeping a bullet journal has helped me stay on track as an author and poet. I track my word count, if I use dictation VS a keyboard, or if I wrote poetry for the day. This year I am using a Seven Seas dot grid with 68 gms tomoe river paper. It works great with fountain pens, opens flat and has a comfortable dot grid to help guide my lines. I pair it with a Platinum Procyon Fountain Pen in Deep Sea and generally use Noodler's Black Ink, although I also like to use Faber Castil PITT pens too. #bujo #bulletjournal #bulletjournaling #planneraddict #fountainpens #planning #stationaryhaul #stationary #noodlersink #procyon #noodlers
This is another of my new series of illustrated poetry from my new book "The Planets: a scifaiku poetry collection". Each Sunday, I set up my desk into "art mode" and work on poetry sketches, urban sketching, my Bujo, or watercolors. Excuse the mess, but creative minds are seldom tidy! This is a true picture of my art studio as I work. My #scifaiku #poems are #illustrated on Canson mixed media paper using #fabercastell PITT pens. When the image is completed, I scan both a printable high res image for art shows and a low res image suitable for my blog. If you'd like to see the finished image, it is available for view at No Wasted Ink. Links are in my IG profile. #poetsofinstagram #poetlife #sketching #poetry #poetrycommunity #haiku #illustrationsketch #illustration #drawings #sketchbook #art #artistlife #artstudio #artstudiolife
As I work at my table in the dealer room, I find that most of the convention comes to me. This is a series of shots of people around me. The first one is of Christopher Eccleston who was having a great time with his fans as he signed autographs a mere twenty feet from my table. This is his first Dr. Who Convention and the fans went all out to make him feel at home on his birthday. A large number of them sang him a birthday song. He was still there, shaking hands and laughing with fans long after I closed and packed up my business at the end of the convention. What a cool dude. :) For my non-whoivan followers, Eccleston was the first doctor to kick off the reboot of the series. He only did one season, but he was an astonishingly good doctor. I've always been sorry that he didn't do another two or three seasons in the role even though I love David Tennent. I took a couple of shots of cosplayers who really went all out on their costumes, including author Barbara Hambley who had an awesome Timelord look. You have to see it. :) So please do swipe to see the rest of the fun. #cosplay #costume #drwho #gallifreyone2020 #gallifreyone #christophereccleston #timelord #fandom
I've been a dealer at Gallifrey One for around twelve years or longer. This year was a total blast for me. Sales were brisk, people were happy and in a great mood, and several of my friends stopped by my table to chat. I want to say thank you to all my customers at the convention. You make my small business rock. While I am more an author and poet these days, it felt great to be centered at my jewelry table and talking stones with folks. I love programming and realize that I'm out there more as an author on panels these days, but this weekend, I was stepping back in my previous role. Swipe right if you'd like to see this year's table and a close up of some of my jewelry offerings. The first shot is of the books I was autographing at the table this year. #gallifreyone #Drwho #artisanjewelry #artisan #stonejewelry #fandom #sciencefiction #scifaiku #poetrychapbook #poetrycollection #austen #books #autographs #jeweler #authors