Author Lisa Hofmann is a planner, and she loves doing on-site research, taking her children to every castle within driving distance to spend hours exploring the grounds, embarrassing their family at any given moment whenever taking a guided tour, because she’s the woman who’s always got just one more question for the guide.  Please give her a warm welcome to No Wasted Ink. 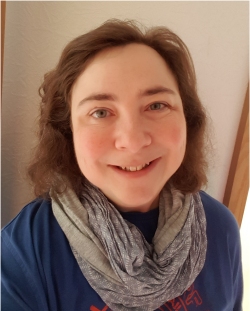 Hi, I’m Lisa Hofmann. I’m 43 years old, married, and a mother of three with a houseful of pets. I was educated in Germany and in Ireland, which has certainly shaped who I am today.

By day, I’m an elementary school teacher who works with migrant children and refugees. At night, I turn into a rabid dark fantasy writer who survives on cappuccino and cheese snacks.

I started writing when I was still in school, but only seriously pursued it much, much later, when I was in my late thirties and discovered that I could actually do this on my own with no need of a publisher. I believe traditional publishing has its merits, but it’s not for someone like me who’s on a tight time-budget. I’m not a full-time writer. I work a lot of extra hours in my daytime job as a teacher, and I have three children who have my full attention. That means, I steal time to write whenever I can. I can’t imagine having meet tight deadlines for my novels or fulfill contracts for possible further books of a series within a certain time frame. I’d constantly feel pressured, and to me, writing is meant to be a pleasurable activity. It’s what I really love doing, and I’m my own boss in that area. I define my own standards, and I want to keep writing the books I myself would like to read, and not have to write to please an editor who’d like to see me change my content to suit someone else’s tastes. That’s why I always shied away from offering my work to traditional publishing houses, and I never looked for an agent. So far, I’m quite enjoying doing this my way, in my own time.

When I started aimfully writing my first book, Stealing the Light. I loved the whole process or writing and publishing it. It felt right, and I knew immediately that this was something I was going to be doing for a long time to come.

Could you share a little about your current book with us?

My current work in progress is a third book of a series, titled “Gates of Eventide”. It’s being edited as we speak, and I’m very excited to get it out there. The series is about a community of outlaws with magical abilities who are hiding in plain sight, operating a fair that sells magical items and puts on shows. The Fair’s biggest problem is one of their own, so to speak – a woman with dangerous magical Talents who grew up outside the community, was rejected by it, and has gained a powerful position among the humans who are out to destroy the Unnaturals. I hope to release this third book in late summer, perhaps earlier, depending on how long the process of getting it ready with my editor and cover artist it will take.

The book I’ve most recently released is titled Trading Darkness. This is a stand-alone novel that’s set during the time of the witch trials in the late medieval period near my home town. Some of the events that I described in it are real, and a few of the characters as well. It was a lot of fun to research, and even more so to finally write it, since the initial idea for it was stewing for about twenty years, since my studies of local history.

The series was an idea that arose from a piece of music I’d been listening to. I was talking to a friend one Saturday about it, and she encouraged me to pursue the thought. It was more a joke than something serious at the time, since we were playing around with characters from a TV series, discussing how so-and-so would handle a complete disaster like the one I was imagining for the storyline, and what such-and-such a person would do, but then I sat down and started making character charts for original characters and began outlining. The idea kept growing and getting bigger, and I suddenly found myself completely captivated.

The stand-alone novel is a book that I’ve been wanting to write ever since my time at university. I studied women’s history and I visited one of the sites where witches were executed in the course of a class I was taking on the witch trials. Standing on “Gallow’s Hill” sent shivers down my spine, and I remember thinking that life certainly writes the most fascinating stories.

The series title is the title of a piece by Mozart – Dies Irae, The Requiem. The idea of light and darkness was already in the first two book titles, so Gates of Eventide is a variation, basically, that tells the reader that we’re heading toward a place where shadows lie in wait.

Trading Darkness has to do with the bargain one of the main characters makes with the devil. He’s trading one darkness for another, but it’s a deal he’s going to regret for the rest of his life.

I think my style is pretty much my own. I don’t try to imitate other writers, but I do read a lot of good books, so there are always bound to be traces of other author’s styles somewhere in what I’m doing. But I do think my voice is my own.

Is there a message in your novel that you want your readers to grasp?

I think my style is pretty much my own. I don’t try to imitate other writers, but I do read a lot of books by great authors whose work I love and have been reading for decades, so there are always bound to be traces of those authors’ styles somewhere in what I’m doing. But I do think my voice is my own.

I find writing in my particular genre a bit of a challenge since it’s not strictly sword-and-sorcery or epic fantasy, but something that I would consider more “soft fantasy”, for lack of a better term. There is magic, and there are magical creatures, but the story is very much more character-driven than a typical sword-and-sorcery might be. I don’t do formula writing – I don’t write for a market of readers who would expect a storyline to develop a certain way per se. I write for readers who love intense characters and intense story development, rather than expect epic battles with dragon-riders and orcs on every other page of the book. My books have characters who are people of their time in a world parallel to ours, only with the premise that magic is a reality and not a superstition. There are real people’s conflicts in a medieval setting based on that premise, and there’s good and evil and every shade of gray in between.

What other authors have most influenced your life?

This is going to sound funny, but I read a lot of different kinds of things. I could name a lot of authors as having influenced my life and my writing. I think Stephen King would be one of them – but in contrast, I would also say Cornelia Funke. What I admire about King is his drive and how he’s managed to keep producing good books over a period of so many decades now. What I admire about Funke is her determination even in the face of personal tragedies, and her ability to evolve. She made a name for herself as an author of children’s books, but what she really is, is a very gifted fantasy writer for all ages. She’s proven that with her Reckless series.

Giuseppa Lo Coco designed the covers for the Dies Irae Series. She’s very talented, pleasant, and easy to work with, and she came up with the images to the words as if she was seeing what I was. That’s magical!

In terms of the writing as such: practice your Art and stay humble. Writing is a craft that you need to hone and work hard to move toward as high a level as you can get. Plan what you’re doing, and rewrite and revise as often as necessary. I also believe it’s ever so important to work with professionals. Get in touch with a good editor, even if you’re thinking of having your work agented and publishing traditionally – polish your manuscript and make it the best you can before you put it in front of an agent or your readers.

Thank you for enjoying my books. Tell your friends about them and support indie authors by leaving an honest review, if possible. It’s what keeps us going. 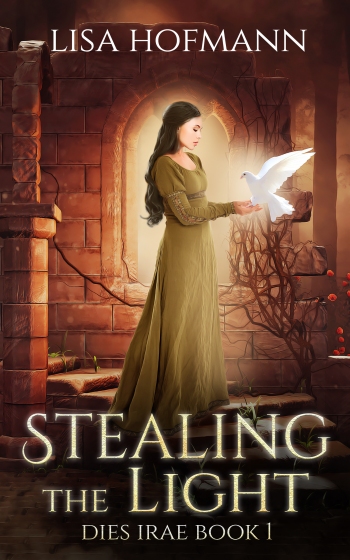