Author Ronesa Aveela is “the creative power of two.” Two authors writing as one to introduce the world to the rich and magical culture of Bulgaria. Please welcome them to No Wasted Ink. 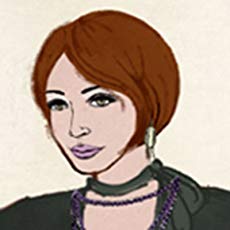 This is the pen name of two authors: Nelly Toncheva and Rebecca Carter (who will be answering questions today). Nelly is married and has two children. In the late 90s, she came to the U.S. from Bulgaria when her husband won a national lottery (not monetary, but immigration). She enjoys painting to relax. Rebecca is happily single. She’s lived her entire live in New England: hates the cold, but it’s home. She enjoys reading, knitting, and baking, although author-related tasks take up most of her time nowadays.

Our writing career began in 2011, when Nelly asked me to help her with a book she had written in Bulgarian, a romantic fantasy about a place she fell in love with when she visited: Emona, Bulgaria. Since English wasn’t her native language and I had a background in editing and publishing, she wanted help making it sound good in English.

I’ve always enjoyed writing. In my senior year in high school, as part of a class assignment, I wrote a short murder mystery in the style of Agatha Christie. It was one of the few papers that impressed the teacher enough that she read it to the class. Since then, writing has been the most enjoyable part of the various jobs I’ve held.

As far as professional writing is concerned, although we started working on the book in 2011, it wasn’t until we finally published it in 2014 that the word “writer” became “author.”

I’m working on the second book in a nonfiction series called “Spirits and Creatures,” which focuses on the mythology and folklore of Eastern Europe. This book is about Rusalki, Slavic mermaids. All the books in the series are geared toward the non-academic world to bring the rich culture and mythology of Bulgaria and the eastern world to the western world. The books include artwork and stories to make the creatures come alive, as well as links to videos and music.

In our fantasy book The Unborn Hero of Dragon Village, a character possesses a book called Lamia’s Bible. This book holds the secrets of all the creatures who live in Dragon Village. I wanted to know what secrets these creatures might have that would enable someone to defeat them, so I did more research. I discovered a wealth of information that I wanted to share.

The writing depends on the type of book we are working on. We write fiction (adult and children’s) and non-fiction. The first book in the adult fantasy (Mystical Emona: Soul’s Journey) is slower paced, with many descriptions, as we want to draw the reader into the location and customs of the people. The children’s fiction (one full-length novel and a few short stories) are faster paced, with more action. We wanted to make the nonfiction books fun, so the writing style is chatty.

I’ll talk about our recent book, The Unborn Hero of Dragon Village. Bulgarian folklore references “unborn children” (boys and girls), who will become great heroes because at least one of their parents is a supernatural creature. Quite often, the mother is human and the father is a dragon. Other heroes are born from a Samodiva (woodland nymph) and a human father whom the nymph enchanted. Dragon Village (Zmeykovo in Bulgarian) is a place at the end of the world where all the mythical creatures live in the wintertime. They return to the human world on March 25, which in Bulgaria is called Blagovets.

Besides wanting to introduce people to the world of Bulgarian mythology and folklore, The Unborn Hero of Dragon Village wants kids to know they are not alone. There are people who can help them accomplish their goals in life if they work together as a team. And, their differences make them unique and special.

No, but every kid has a fantasy about being special, especially if that child is different. We all long to believe in the stories we were told as a child. In Bulgaria, Samodivi are still very much alive in the minds of the people. They are beloved and feared.

My favorite authors when I was growing up were Agatha Christie and Taylor Caldwell. They both made me think. With Christie, it was a matter of using my mind to solve a murder mystery. With Caldwell, it was pondering the world: politics, religion, life in general.

I’d pick Neil Gaiman. Having recently read his American Gods book, I’d like to know more about his research methods into various mythologies that he included in the book.

Nelly designed the cover for The Unborn Hero of Dragon Village. Even though she does her own artwork, we decided to have the cover illustrated by Dmitry Yakhovsky. He does marvelous illustrations and works quickly.

Don’t give up. It can be frustrating, but find other authors you can talk with about issues you are having. We’ve all gone through it, and are willing to support each other.

Indie authors love hearing from you. A single kind word or message does so much to brighten our day and make the struggles of publishing worth it. Please also take the time to write reviews, even a sentence or two telling others what you thought of the books you’ve read.

The Unborn Hero of Dragon Village