Author Jon Osbourne could be described as a long time gamer who took up the keyboard to tell the stories my dice wouldn’t. He would not be the first writer to transition from the gaming realm to writing books. Please welcome him here on No Wasted Ink.

I’m Jon R. Osborne, a Midwestern nerd who split his childhood between Chicagoland and rural Illinois. I started playing role-playing games when I was 13 and I never lost the passion for the hobby. I was a journalism major in college but did almost no work in the field after graduation. I work in scientific logistics – at least until I reach the point I can turn full-time writer.

I first started trying to write fiction in college. I was a journalism major, and I wanted to find a way to share the adventures from my D&D campaigns. My first attempt at a book was a collaboration with two of my players trying to write out our college campaign.

Later, I began writing scenes for the players as ‘behind the scenes’ and between session material, as well as filling out recaps of game sessions to include extra material.

I didn’t consider myself a writer until a publisher accepted and published my first short story. I went to the convention where the book launch party was held and signed copies of the book. It was surreal.

My current book is set in my urban fantasy universe and follows my Milesian Accords trilogy. It focuses on what happens when magic returns to the world, with various characters trying to deal with the fall out.

I had hoped that the story would continue after I finished the trilogy, and reader feedback inspired me to keep the story going. The original Milesian Accords was inspired by the Irish legends in Lebor Gabala Erenn – The Book of Invasions, specifically the conflict between the Tuatha De Danann and the Milesians.

I don’t have a singular style, but I tend to use the same style for a given setting. For example, in the Milesian Accords and ensuing books in that setting, I write each chapter from a single character’s point of view.

The current book I’m working on is titled “The House Between Worlds.” The origin becomes obvious if you’ve read the Milesian Accords, but in a nutshell the home of one of the character’s becomes a waystation between the mundane world and the otherworld.

I don’t consciously put messages in my work. I think you can weave in a message if you choose and do it organically without beating the reader over the head. Great examples are Star Trek or the X-Men. The X-Men’s struggle against anti-mutant sentiment was a parallel of the civil rights movement, with Professor X and Magneto as stand-ins for Martin Luther King Jr. and Malcolm X.

The events in my books do not reflect my own experiences. I’ve never had a supernatural delegation turn up on my doorstep (checks door). A few characters in my urban fantasy books may have attributes inspired by people I know, and one minor character is a tribute to a deceased friend, but overall the characters stand on their own. Some of the locations are based on places from my childhood – especially Liam’s farmhouse.

In the military science fiction books, it there are more characters inspired by real people. Some of these are ‘red shirts’ – for some reason mil sci fi fans love to see themselves go out in a blaze of glory. One of the POV characters for my most recent mil sci fi book started in the previous book as a red shirt I never got around to ending, and he filled a role in the next book. I won’t say if he made it to the end of the newer book.

Larry Niven and Robert Heinlein were my major science fiction influences. They made me believe someday mankind would step out into the stars. Larry Niven’s “Ringworld” was one of the first science fiction books I remember reading – I was probably too young (it was my mother’s book) and some of it went over my head, but I was amazed. I stumbled across Heinlein’s books in a store in the mall – one of the first of his I read was “The Moon Is A Harsh Mistress.”
As for fantasy, early on I read the Thieves’ World series, Stephen Brust’s Vlad Taltos books, and David Eddings’ Belgariad. My first urban fantasy was courtesy of Charles de Lint, and he inspired my urban fantasy writing.

I see a difference between inspiration and mentor. While the aforementioned authors were inspirations, they never provided feedback. If I had to name a mentor, I’d say it was my publisher Chris Kennedy. His guidance and feedback made me a better author. I believe there is a marked difference between Book One and Book Three of the trilogy regarding my writing quality, and I owe a lot of that to Chris.

The covers on the Milesian Accords books are the second ones. When Podium Audiobooks produced the audiobook for ‘A Reluctant Druid” they sent us the cover art by Alexandre Rito that they were going to use and told us we could use it and the art for the other two books. The covers were so awesome I said yes immediately.

Make a habit of writing. I wasn’t published until I was 51 because I lacked the discipline to finish projects. I now use a spreadsheet to track my writing, and I have a time scheduled to write. My first story was published 3 years ago – I now have 6 books and 9 stories published. If you have trouble finishing a book, try short stories. Also, don’t obsess on making your book perfect. My publisher has a saying – “Any story can be fixed in editing except the one that isn’t finished.”

Thank you. Every time I get a review or e-mail telling me someone enjoyed my work it inspires me to keep writing. 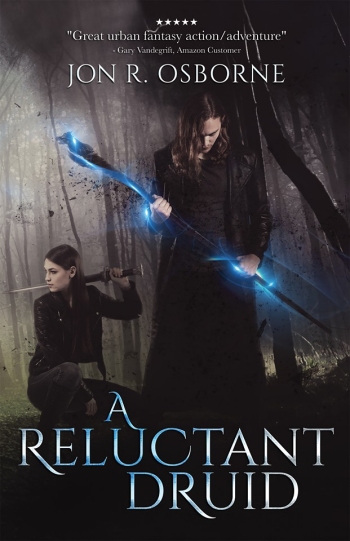