Hello, Fellow Readers and Writers of Speculative Fiction!
Wendy and I were guests together on a recent recording of the Sci-Fi Roundtable Podcast. The episode centered around women writers of SF/Fantasy. Terrific conversation. A great connection between the guests. I’m jazzed to have been a part of it and hope that you tune in when it airs : )

Here’s the thing. I nearly didn’t raise my hand when the invitation to participate came out. It was a knee-jerk reaction to just step back. Bow out. Something I’ve gotten used to doing when something’s labeled “for women.” Because I identify both as a lesbian in orientation and beyond my female biology in gender – queer, genderqueer, non-binary are each cool with me.

Sometimes, it’s my own discomfort that gets in the way in certain circles of women. Sometimes it’s that of the women in the circle. Either way, it doesn’t always feel worth the trouble in some social situations. In this situation, I’m glad I raised my hand. Grateful for Wendy’s warm “come on in.” Not to mention her invitation to do this guest post.

Now, you came here to read a post about speculative fiction. And it’s Pride Month as I’m writing this. So, here’s the connection.
Like many queer folks—especially young adults of my generation (think Star Trek: The Next Generation)—I knew without a doubt I was not altogether comfortable in my female body. Along with the expectations of the time about being female. There weren’t identities available at the time to describe my experience.

Except in the world of spec fiction.

In retrospect, it’s no wonder I was drawn to alien species on my television screen. The ones who either refused or worked hard to fit in. To the stories in the classic SF novels slipped to me in school by the kindly nun who seemed, on some level, to get my difference. In them, I found glimpses of potential identities, relationships, family—even if it took backflips of translation to get there.

In a time and a place (Midwest, U.S.) without resources for folks of similar experience, those books and shows literally saved me. Transported me until I could resource myself. Until the wheel of time could turn a few more times to allow for changes and broader acceptance. Growing up and living in the margins like that is an experience of isolation and search for community. These stories—as story does—taught me the power of imagination in creating your place in the world.

These stories also gave me wings. Starting with the dragon wings of Anne McCaffrey’s Dragonriders of Pern series. Not only did they refer to the first gay relationships I’d seen in print; but a world with telepathic dragon companions in a lifelong bond with their riders was a balm to the loneliness of a queer teen.

That world inspired me to write the (very closeted) essay about SF/Fantasy that earned me a scholarship to a private high school my parents couldn’t afford. Which led to unanticipated opportunities for college and, eventually, an MFA in Creative Writing, which currently supports both my own writing and my work coaching writers and editing their work. Wings.

Ursula K. LeGuin and John Varley asked important questions in their stories about binary gender. Sexual orientation. And about relationships that defied the binary in a variety of ways. They each explored the concept of transitioning, as well, each through their unique lens. Reading The Left Hand of Darkness, The Telling, The Titan Series, and Steel Beach as a teen/young adult gave the beginnings of form to feelings I’d nursed for some time. A sense of freedom. Encouragement to keep exploring them, redefining them as culture allowed. Wings.

I’ve never stopped going to spec fiction for it’s brave explorations—and, yes, speculations–when it comes to the possibilities of relationship, cultural, racial, and personal identities. To Octavia Butler, Nicola Griffith, Margaret Atwood, Poul Anderson—the list goes on. How those identities often intersect with magic, technology, science, sociology in spec fic, to me, only expands the potentialities. Keeps giving me hope for a more accepting future. Authors like Charlie Jane Anders, Kameron Hurley, Becky Chambers, Akwaeke Emezi, Noelle Stevenson, J.Y. Yang, Tamsin Muir, and so many more are exploding that future into the present.

I hope you don’t mind that I got a bit personal in this post. Maybe it’s not what you were expecting. It may have even been a bit uncomfortable, for some. It’s important, I feel, as writers, to be reminded once in a while that we’re always writing for an audience—not only a market. That our audience can be counting on us to take risks and still be mindful in our representations. That our stories may be what some need, as well as what others want. To create space for #ownvoices. And when we, inevitably, show our growing places, our less-than-conscious spaces, that we accept feedback from those affected with grace, openness, and discernment.

And for the readers in us all: consider this a challenge to read—or keep reading—stories that have themes that trigger you. Characters outside those you comfortably relate to. Cultures alien to your experience. After all, that’s part of what puts the spec in spec fiction, isn’t it? : )

Diversity in the genre is increasing exponentially. It’s an exciting era for our favorite genres and the exciting hybrids that are emerging. We can appreciate our old favorites. And we can acknowledge that there were limits in some of the stories that excluded the participation reading invites of readers-in-the-margins.
We can do better—are doing better—as writers and readers. Becoming open to inclusion. I mean, if an institution like the Star Trek franchise can finally move closer to it’s vision and potential by acknowledging that Seven-of-Nine likes the ladies (without the translation I made in the 90’s)…well, it gives me hope. And wings as a writer. In the way spec fic always has. 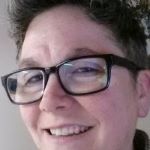 D.M. Rasch is an author of LGBTQIAAP speculative fiction (and a sometimes poet) who lives in the Denver, CO area with 2 sister kittens who are pretty tough in the editing department. She holds an MFA in Creative Writing and balances work as a Creative Coach and Editor (as Deanna M. Rasch) with her writing in her business, Itinerant Creative Content & Coaching LLC . Find her work on the linked Amazon page and look forward to the upcoming publication of her YA novel Freedom’s Cost, as well as an appearance in the anthology, Innovation, Aug. 2020.
LinkedIn
Amazon