Jack London (John Griffith) was born in 1876. An illegitimate child, Jack lived his early years in the slums of Oakland, California. He was forced to leave school at an early age to help support his mother and step-father. His early jobs were in pickle factories on Cannery Row, as an “Oyster Pirate” stealing oysters in the night and selling them early in the Bay Area markets, shoveling coal and later working on a seal hunter schooner as an able-bodied seaman. Through all of his labors, Jack held on to the dream of being a writer. He was self-educated for the most part, reading books at the local library in Oakland, California instead of enjoying a formal education. London was mentored by one of the librarians, Ina Coolbrith, who later became California’s first poet laureate and an important figure in the San Francisco literary community in her own right. London’s years in the Klondike searching for gold proved to be fodder for his novels, The Call of the Wild and White Fang.

The Call of the Wild was extremely popular from the moment it was in print. The first 10,000 copies sold out immediately and it is still one of the best known stories written by an American author. The book was London’s first success and it secured him his place in American literature. The book has been published in 47 languages and has been made into several movies one starring Clark Gable and the other starring Charleton Heston.

Jack London was married twice. He had two children with his first wife, Elizabeth “Bessie” Maddern, but they separated due to irreconcilable differences. He found his soul mate in his second wife, Charmian Kittredge, but while they traveled the world together and lived happily, they were unable to have children together. Jack London retired to his ranch near Sonoma, California, where he died at the age of forty of complications related to kidney stones and a morphine overdose. It is unknown if his death was an accident or suicide.

The Call of the Wild begins when a St. Bernard-Scotch Collie mix named Buck is stolen from his comfortable life as the pet of Judge Miller of California’s Santa Clara Valley. Manuel, the judge’s gardener, steals Buck and sells him in order to pay his gambling debts. Buck is crated and shipped to Seattle. There he is purchased by a pair of French-Canadian dispatchers who transport him to the Klondike and train him to be a sled dog. Buck learns to survive by observing his teammates and develops a rivalry with the vicious lead dog Spitz. Buck and Spitz have a fight to the death and Buck emerges victorious and takes his place as the leader of the sled dog team.

The sled dog team is sold to a Scottish mail carrier and the dogs are forced to haul heavy loads for their new master. Over time, the dogs are abused and become tired. When they can no longer work, they are either shot by the Scotsman or eaten by wolves.

Buck is next sold to a trio of greenhorns known as stampeders. They know little about survival in the Northern wilderness and struggle not only to control the sled that Buck and his team pulls, but provide poor care to the dogs in general. As they attempt travel during the dangerous spring melt, they are met on the trail by experienced outdoorsman John Thornton. Thornton warns the three greenhorns against crossing a frozen river, but they refuse his advice and order Buck forward. Exhausted and starving, Buck refuses their orders and lies unmoving in the snow. As Buck is beaten by his owners, Thornton becomes disgusted and cuts Buck free from his harness. Thornton tells the trio that he is keeping the dog, much to the trio’s displeasure. Buck’s previous owners continue across the frozen river. True to Thornton’s warnings, the ice gives way and they fall into the icy river along with the neglected dogs and sled.

Thornton nurses Buck back to health and the sled dog comes to love him. Buck saves Thornton when he falls into a river and the bond of love and devotion between them grows. Thornton takes Buck with him into the Yukon gold fields. Buck begins to roam and socialize with the wild wolves in the area. After returning from one such trip, the dog discovers that Thornton and his miner friends have all been killed by a group of Yeehat Indians. Buck avenges Thornton’s death by killing the Indians, before following the wolf into the forest to answer the call of the wild.

The Call of the Wild is often a favorite of young readers because it belongs to the genre of fiction where an animal, in this case a dog, is anthropomorphized with human emotions and traits. In the novel, London give Buck human thoughts and insights as the dog shifts from a civilized pet into a wild animal running with the wolves. While we see many examples of similar stories today, when this novel was written the concept was not as commonplace.

I am a late comer to the work of Jack London. I had heard of his books and had come close to reading them as a child, but because they were not required reading in my public school curriculum, I passed over these stories. It was not until I decided to make an effort to read more of the classics, after I had graduated from college, that I picked up a few of London’s novels. I also was intrigued by London because of what I learned about him, as I visited Cannery Row in the California Bay Area, and saw all the plaques dedicated to him. I discovered a wonderful author who has lived a life as interesting as the characters he developed. I can understand why The Call of the Wild has remained popular a hundred years after its creation.

You can find The Call of the Wild at your local library or download it for free at Project Gutenberg. 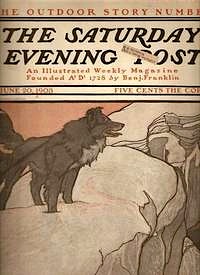 I would rather be ashes than dust!
I would rather that my spark should burn out in a brilliant blaze than it should be stifled by dry-rot.
I would rather be a superb meteor, every atom of me in magnificent glow, than a sleepy and permanent planet.
The function of man is to live, not to exist.
I shall not waste my days in trying to prolong them.
I shall use my time.