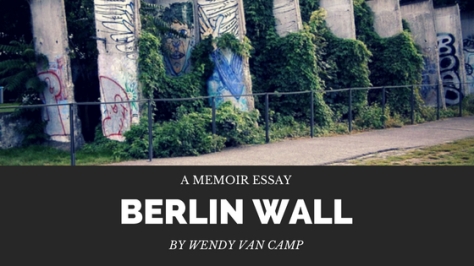 I stood in the late afternoon sun surrounded by blooms in the Ronald Reagan Presidential Foundation and Library. It is the home to astonishing exhibits. Including Reagan’s Air Force One airliner and a massive piece of the Berlin Wall that stands as a sentinel in the center of the rose garden. Covered in graffiti and moss, it is a symbol of the fall of the old Soviet Union.

I had fought against this barrier between the United States and the Soviet Union during the cold war. But, instead of bringing down the Berlin Wall, as President Reagan did, I had found a way to leap across it. Placing my hand on the warm stone of the monolith, I felt a sense of completion.

I had been a serious young woman, recently graduated from college, enjoying her first media industry position. I landed a job as the Unit Production Manager of a nationally syndicated radio news program on NPR. My main duties were being an assistant and liaison to the news editors and other departments of the parent production company.

One morning, I had finished writing the promo for our business news radio program, when the head of accounting walked up. She placed a file on my desk and gave me a stern look. I sensed her frustration, but felt that it was not directed at me, but more at the problem she was bringing to my doorstep.

“We’ve been trying to pay this reporter in Poland for over six months, but every time we reach the Berlin Wall, the money stops. He is your reporter and your responsibility. You will have to figure out a way to pay him.” She went back to her office without looking back.

I stared at that file without opening it for a good five minutes. What did I know about accounting and payroll? Nothing. I knew that we had dozens of freelance reporters scattered all around the globe, but they spoke directly to the editors, not to me. Accounting had always handled the processing of their checks in the past. It was not part of my regular duties.

My next task of the morning was to check the paper supply of the UPI and Reuter’s news feeds. There was no internet to search for information, back then as there is today. The news came to our newsroom via these wire services. The large printers connected to the world via phone line. It was where our editors obtained the news of the day. As I put new rolls of paper into the machines, resetting them to start printing out fresh batches of stories, I asked one of the nearby editors if he knew about this Polish reporter and his situation.

He did. The situation had been common knowledge among the program’s four editors for quite some time. It was a matter of the government officials opening the reporter’s mail when it reached the Communist Block. No letter from our company to this reporter could pass through the Berlin Wall. That was always where the paper trail ended. The editor worried about losing this reporter if we could not pay him.

I walked back to my desk, thinking about this man in Poland. He had been a stranger to me before, a name on the top of a file, but after this conversation, he was now a real person in need. I could not fault the man for considering leaving due to lack of payment, and that he had chosen not to do so spoke of his dedication. I admired this and I wanted to help him.

I sat at my desk and stared at the wall. Both the physical drywall before my eyes, and at the same time, the Berlin Wall that had become a barrier. I needed to bring down this wall, to find a means of connection between our American company and Communist Poland in a legal manner. I dismissed idle visions of cold war spies and mail drops over transoms.

I had not opened the file on my desk, but in this case, I did not feel that anything in it would be of help to me. If the information in the file had stymied an entire accounting department for half a year, what use could it be to me now? What I needed to know was a means to get money through the gatekeepers of the Berlin Wall and into Poland. It was a matter of connections across international lines, not accounting.

As I sat there, an idea popped into my mind. Why not call the United Nations? Were they not people who worked to solve international situations? At the very least, they could direct me to someone to whom I could ask questions.

I called information and got the number for the United Nations building in New York City. Once connected, I told the operator that I was the Unit Production Manager of a national radio program and needed to pay a reporter in Poland. Was there anyone who could help me?

“Of course, Madam,” the operator said, “I will connect you with the Polish Ambassador. One moment, please.”

My jaw must have dropped when I heard those words. I was a kid right out of college who had not even left her hometown for her first industry job. Now, I was about to speak with the Polish Ambassador in New York City. I gripped the phone and reminded myself that I was calling with legitimate business. I thought again about that reporter and steadied my nerves.

The Ambassador picked up the line and gave me a cheerful greeting. He sounded like one of my old world uncles, speaking with impeccable English, but with a slight accent. “And how might I help you?” He finished after we exchanged a few simple pleasantries.

I gave a brief description of how our accounting department had been trying to pay our reporter in Poland for six months. How the money always stopped at the Berlin Wall. The Ambassador immediately knew what the problem was. He explained that even he did not send money to Poland in this manner.

“Then how do you send money to Poland across the Iron Curtain?” I asked.

The Ambassador explained if we deposited the money to an account in a Polish bank that had a branch in New York City, from there it could transfer the funds to a sister bank in Warsaw. Since both were branches of the same Polish bank, this removed the international mail element. An account could be set up in the reporter’s name and he could withdraw the money in Warsaw. The Ambassador said that he would personally speak to both branches and make sure that the transfer would happen. It was the least he could do to help one of his countrymen.

The Ambassador also apologized that he could not get the money closer to the reporter. Warsaw was one hundred miles away from the reporter’s address, but legally that was the best he could do. I thanked the Ambassador for his time. I told him that I would confer with our accounting department and the reporter to make sure that his solution would be acceptable to everyone. If they were, our people would talk to his people and get the job done.

Next, I called the reporter in Poland and explained about the long distance that he would have to drive to get his paycheck. The reporter was grateful that he would finally be receiving his money and would have a method of getting his checks on a regular basis in the future. He assured me that this method of payment was acceptable to him. His sincere thank you and the sound of relief in his voice touched me.

I knocked on the door frame of the head accountant’s office and asked, “Might I come in?”

She glanced at the file in my hands and said, “Look, I told you that paying that reporter is your responsibility…”

I interrupted her and explained the method of how the Polish Ambassador would set up the connection between the two banks, setting up a pipeline that she could use to pay the polish reporter, now and in the future.

“You called the United Nations?” She seemed flabbergasted by the idea. The annoyance that my appearance had generated vanished from her expression as she said, more to herself than to me, “Why didn’t we think of that?” She called for her assistant as I set the file and the contact information onto her desk.  She smiled at me.

That afternoon, as word of my success spread throughout the company, I received informal congratulations from reporters in our Boston NPR office and from an associate editor who called in from South America. I seldom had contact with people outside our branch of the operation. It was the first time I realized how far our radio program went in the world. I was part of something larger than myself, yet I realized how small the journalistic community was too.

As the sun beat down on my shoulders, in present-day Southern California, I gave the monolith one last pat. Having that piece of stone under my fingers made the events of that long ago day seem more real to me. It was not bits of information I had been dealing with, mere pieces of papers I shuffled. It was real places and people that I had made a difference with. The solid stone of the Berlin Wall under my hand proved that.

Berlin Wall first published in a small literary magazine called Shadows Express Magazine in 2013.  It was the second short story I had ever published.  The story is based on true events of my life.   This version has been cleaned up a little for typos and grammar but is otherwise very close to the original tale that appeared in the literary magazine.

If you enjoyed reading Berlin Wall, please consider viewing it on Medium in the publication “The Junction” where it enjoys a reprint. Clapping for it there to shows your support for the story and the magazine.  This helps boost the story in the algorithms. 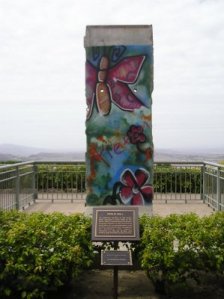 I am delighted to announce that my short story memoir entitled Berlin Wall is included in the Summer 2013 issue of SHADOWS EXPRESS MAGAZINE.

Berlin Wall is a memoir of a workplace event when I was Unit Production Manager of a syndicated national radio program.

Shadows Express Magazine is free to read online or to download and is published via ISSUE.

Join us Thursday, December 1st at 5:00 p.m. for Open Mic Night at the Anaheim Central Library!
Thanksgiving Weekend has come and gone and so has LosCon 2022. It was a busy week for the poets of SFPA.