Author Laurel Anne Hill is an award-winning author of science fiction, fantasy, steampunk and horror. Many of her stories inspire readers to choose the way of worthiness.  Laurel is a fellow Broad Universe member and costumer with whom I’ve shared many a rapid fire reading with.  Please welcome her to No Wasted Ink.

Hello, I’m Laurel Anne Hill, author and former underground storage tank operator. Really! My day job for many years included environmental health and safety at a pharmaceutical research and development facility. I grew up in San Francisco with more dreams of adventure than good sense or money. My close brushes with death, love of family, respect for honor and belief in a higher power continue to influence my writing and my life. I’m blessed to have a loving husband and four wonderful children.

I started writing before I could read. Stories created themselves within me I’d tell them to my older sister and she’d write them down. I’d illustrate my tales with pictures from comic books and magazines. My sister loved to write her own stories, too. I admired her and still do.

When I was very young, I don’t think I understood the concept of being a writer. At some point in elementary school, I knew writing was what I wanted to do. I had a story published in the children’s section of a major San Francisco newspaper when I was eleven years old. Then I knew I’d become a real writer. The story, “Nancy Saves the Day,” was horrid, or course. Heck, I didn’t know the conventions for creating quality prose. I still read the piece every once in a while, to laugh and remind myself of how far I’ve progressed.

A mystical vision of an airship appears to fifteen-year-old Juanita in 1894. The long-dead captain commands her to prevent California’s thrown-away people—including young children—from boarding trains to an asylum. That institution’s director plots murder to reduce the inmate population.

Spirits watch over Juanita. But who is she? A mystic in love who holds life sacred? Or a ghost-possessed railroad-saboteur?

To save innocent lives Juanita must take lives of the corrupt. How can she reconcile her assignment with her belief in the sacredness of all human life? And will she survive to marry her betrothed?

Juanita sets out despite inner trepidation to sabotage the railroad. Her ancestor, Billy, guides her. Then bit by bit, she discovers the gut-wrenching truths all of her dead family neglected to reveal.

Come visit Juanita’s world—an alternate nineteenth-century California—where spirits meet steampunk, where both love and anger emanate from beyond the grave.
What inspired you to write this book?

In the early 1990s, I had a dream about an elderly woman riding a train. The train headed toward a disreputable asylum where inmates died of neglect or even by euthanasia. The attendant placed an abandoned baby in a basket on the adjacent seat. The woman realized the baby was her great-granddaughter and escaped the train. With a broken foot, she carried the infant many miles. This dream became the basis of a short story, never published.

Where had the dream come from?

First of all, when I was a teen in the 1950s, my beloved maternal Swedish grandmother had paid the hospital bill for the birth of one of my sister’s sons. The bill had cost Grandma much of what she’d possessed. Grandma had died in 1989. In the early 1990s, my memories of her remained close.

Next, a month before I birthed my daughter in 1979, I’d fallen and broken my foot as I left work in San Francisco. My husband, David, had expected to meet me on the other side of the bay. Cell phones as we now know them didn’t exist. I hadn’t wanted to worry David by not showing up when expected. I’d walked on a broken foot, taken public transportation and traveled thirty miles to reach the train station near our home.

Third, and quite important, before I’d married David, I’d worked for him in a hospital laboratory. The hospital performed lots of abortions, including many late term. I’d believed in the right to choose, and still do. Yet stacks of plastic specimen containers containing pickled babies left a sour taste in my mouth. After all, I’d hoped to birth a child of my own someday.

That fateful night of dreaming, my pro-choice beliefs had gone head-to-head with a pro-life type visualization. In the story that emerged, a woman who’d married into a Mexican family declared her own opinions. I had no choice but to accept her challenge to tell the tale of the baby she saved. Only years later did I discover the inspiration and tragedy associated with my paternal Mexican great-grandmother’s life. I’d never met her. She’d died over twenty years before I’d been born.

My stories tend to be plot driven, although I try to stay close to my point-of-view characters. I like to “show” rather than “tell” whenever I can.

I’d gone through a number of potential titles during the writing process. When I sent my manuscript to Sand Hill Review Press, I’d entitled the novel “Woman of the Light.” That title hadn’t worked for the editor, so I chose The Engine Woman’s Light. I wanted potential readers

What we do can make a difference in the world.

Are experiences in this book based on someone you know, or events in your own life? Some experiences are based on events in my own life, as explained above. Also, I’ve hiked, camped, run rapids, ridden horseback and operated a steam locomotive.

What authors have most influenced your life? What about them do you find inspiring? I love the work of many authors, such as Neil Gaiman and Graham Joyce. I think, however, the work of children’s authors have had the biggest impact on my life. For example, Elizabeth Foster, author of Gigi: The Story of a Merry-Go-Round Horse, showed me the magic created when blending imagination with the reality of world conditions and history.

If you had to choose, is there a writer you consider a mentor? Why?

My mentor is Charlotte Cook, a writer, editor and dear friend. She has the ability to read a story and determine with ease what makes the piece work and what doesn’t.

Who designed the cover of your book? Why did you select this illustrator? Julie Dillon,

Julie Dillon, winner of the Hugo and Chesley awards, designed the cover of The Engine Woman’s Light. I love the vibrancy of her art, and her breathtaking ability to portray diverse women protagonists.

If you love a story that’s not working, don’t give up on it. Put it away for a while then take a fresh look. Read each page, then ask yourself if the text invites a reader to turn the page, and why?

Thank you for reading my work! All the characters living in my head thank you as well. 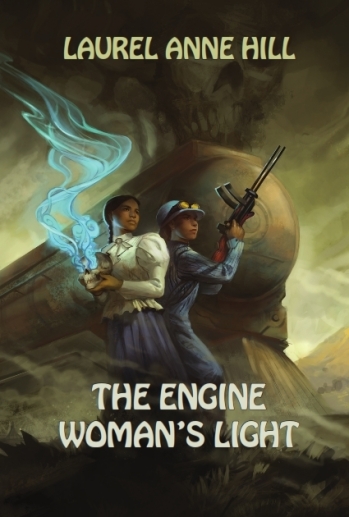