Stephen R. Donaldson was born in 1947. He spent much of his youth in India due to his father’s work as an orthopedic surgeon in that country. He attended the Kodaikanal International School. Later, he would gain a bachelor’s degree from The College of Wooster and a Master’s from Kent State. He currently lives in New Mexico.

Donaldson is best known for his long-running series The Chronicles of Thomas Covenant, a fantasy about a man who suffered from leprosy and was called to an alternate world to save it. His stories are characterized by a sense of moral bleakness, complex psychological reasoning, and a fondness for arcane vocabulary. Mordant’s Need is a two-part series, a long novel that was broken up into two parts, and features a unique magic system and court intrigue that rivals the “Game of Thrones”.

The author’s stories show a wide range of influences, such as the operas of Richard Wagner, Mervyn Peake, C.S. Lewis and JRR Tolkien. The largest inspiration for The Mirror of Her Dreams must come from Roger Zelazny’s Amber novels, of which the author is known to be a big fan.

“The story of Terisa and Geraden began very much like a fable. She was a princess in a high tower. He was a hero come to rescue her. She was the only daughter of wealth and power. He was the seventh son of the lord of the seventh Care. She was beautiful from the auburn hair that crowned her head to the tips of her white toes. He was handsome and courageous. She was held prisoner by enchantment. He was a fearless breaker of enchantments. As in all the fables, they were made for each other.”
― Stephen R. Donaldson, The Mirror of Her Dreams

The Mirror of Her Dreams is the story of Terisa Morgan, a young woman that feels as if she is fading from existence and has doubts that she is real. To help her establish her own reality, she lines all the walls of her apartment with mirrors. By seeing her reflection, she assures herself that she is alive.

One night, Terisa has a dream where she is hounded by men on horseback. A young man steps in to protect her. The following night, she has a bout of fear that she is fading from the world. To counter this, she sits in front of one of her many mirrors. That is when the man from her dream crashes through the mirror before her. He is Geraden, a bumbling Apt who has failed to become an “Imager” after ten years of study. He comes from a mystical world called Mordant and is in search of a champion to save it. Geraden is convinced that Terisa is that champion, even though the girl is not quite what he was expecting to find. He pleads with her to come with him through the mirror to Mordant and Castle Orison.

Starting as an ordinary shy girl from New York City, Terisa transforms into the center of palace intrigue. The court of Mordant is divided about her. Some believe she is a powerful “Imager” because she was discovered in a room of mirrors and could see her own reflection without going mad. They view Terisa as a potential ally or threat. In Mordant, magic comes from mirrors. The mirrors show only one place and time and no one sees their reflection in them. The powerful “Imagers” use the magical mirrors to see into the future or parallel worlds. The other half of the court is convinced that she is just another mistake of Geraden’s and do not take her seriously.

Terisa must deal with the puppy-dog earnest Geraden, a senile King and his strong-willed daughters, a mad Adept, Geraden’s well-meaning brothers, and the factions of Imager masters that belong to guild known as the “Congery”. The threads of the story twists and turns and little is what it appears in Orison. There is a plot to depose the King, a rogue Imager sends magical creatures to cause destruction in the kingdom. It all is overwhelming to a doubting Terisa who can hardly make a decision of her own due to her debilitating passivity. Can she overcome her inner fears and become the champion of Mordant as her friend Geraden remains firmly convinced? 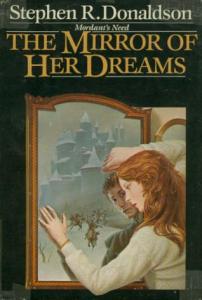 I first read The Mirror of Her Dreams when it first came out in 1986. I blush to say it, but the striking cover of the girl looking into a mirror and a man gazing back at her from the glass caught my eye and intrigued me. I had read Donaldson’s The Chronicles of Thomas Covenant books and was pleased to see that he had branched out into a new world.

What struck me first about the book was the unusual heroine, a girl that had been abused by her parents that she was passive enough that it could endanger her, even in our own world much less that of a fantasy realm. I found myself having sympathy for Terisa Morgan, although there were times when I wanted to shake her and tell her to wake up. Women today may have trouble with the passivity of this heroine for she is not a strong female and does tend to lean on the men around her.

The first half of the book does drag due to the long information dumps about Mordant’s past and world building description. I feel that the author might have found another way to convey this information. However, the court intrigues, the constant danger that Trisa and Geraden find themselves in did keep the story interesting enough for me to finish the book and then go on to its sequel. I also enjoyed the mild romance between these two characters.

Where the book shines is in the details of the Imagers and their guild the Congery. The magic system is rather unique, but has a strong basis in previous fantasies, with hints leaning toward Carroll’s Alice in Wonderland or Zelaney’s Prince Corwin of Amber.

There is much to like about this fantasy novel and its sequel, A Man Rides Through. While the first novel is a bit slow, the second is action packed and a very satisfying read. Be warned, The Mirror of Her Dreams ends in a cliffhanger, which at the time was hard on me since the second book did not come out for a year, but now both books are available. You will not have to wait a year to learn the conclusion of this tale as I did! Mordant’s Need has stayed with me down through the years and I view it as a solid classic of the fantasy genre.