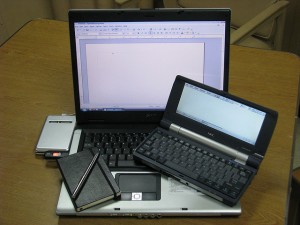 Being a member of the Alphasmart community, I have developed an appreciation for older electronics. I’m very happy with my Alphasmart Neo for writing rough drafts and it is my go to machine for NaNoWriMo in November. However, after the writing frenzy of NaNoWriMo is over, I generally have revisions to do. The small screen of the Neo is simply not suited for this. One day I was surfing the machines that other writers were using for NaNoWriMo on Flickr and I came across a photo of a tiny Nec Mobilepro 900 as part of a writer’s collection along with a Acer Aspire 5100 and a moleskine notebook. It was the smallest “netbook” I’d ever seen. I thought it was simply adorable.

What is the NEC MobilePro 900? I was determined to find out more about this tiny mini-computer. It is such an antique machine that most people have never seen one before. When NEC first developed this machine for the business market back in the early 90’s, it was considered the top-of-the-line pocket PC, a fore-runner to today’s laptop. Jet setting executives would sport this handheld device that cost over $1000 new and would be able to stay in touch with their offices via cable modem or wifi, computing for the first time on airplanes or in their hotel rooms. They touted its speed, the state of the art connectivity via its gold Orinoco card and the Microsoft pocket office suite that came pre-loaded. The machine would turn on instantly with seconds to bootup and the keyboard, while small and portable, was still large enough to be comfortable to write on. Not only did the MobilePro 900 come with two CF ports, but it had a USB slot, one of the first portable machines to do so.

Needless to say, I was intrigued by the device. I had considered purchasing a netbook to do my revisions at the coffeehouse, but after trying them out in the retail store I concluded that they were simply too slow to use, even for simple writing. Cost was also a factor. At the time I could purchase a used NEC MobilePro 900 with a case for around $60. Today, you can find them for even less. It made the NEC cost effective and portable enough that I was willing to give it a try.

The features of the NEC MobilePro 900:

Instant on/off
Keyboard is 92% of normal size
Half sized VGA screen
Pre-loaded with Microsoft Pocket Office
Touch screen use with stylus
Significantly lighter in weight than a notebook
The unit measures 9.69″ x 5.05″ x 1.19″ and weighs 1.8 lbs. Very portable.
Has USB connection, CF slot and PCMCIA slot – perfect for networking cards
The NEC has 64 megs of RAM available to the user.
A 32 meg flash ROM area where you can install programs, data and backup files.
Battery life is around 5 to 7 hours

I’ve been using my NEC MobilePro 900 for over a year and love its portability and speed of bootup. However, it was not an instant turn it on and be able to write situation. I needed to research the antique software and old accessories that were needed to make it into a productive, non-distraction, writing machine. Once all of these adjustments were done, it has become an excellent inexpensive writing device. If you are a student or a writer without much funding to buy a full-fledged computer, I recommend that you look into purchasing a NEC MobilePro 900 on eBay. It could be the writing solution that you seek.