I grew up in the Pacific Northwest and was seeped in the legends of Bigfoot, or the Sasquatch as the Native Americans in the area call them. Naturally, I found myself interested in a fictional story based around these old legends. I want to welcome Patrick C. Greene and his novel Progeny to No Wasted Ink.

My father was a journalist and novelist so I had a good bit of exposure to the business as a child. I was writing, in a sense, before I knew how via drawings and telling nonsensical stories, even if nobody was around.

In about the seventh grade, I decided I would be a writer. I was small for my age, and easy target for bullies, and of course the “weird kid”, so at some point, I decided to learn how to defend myself and quickly became obsessed with martial arts, setting my interest in writing aside to train and learn all I could about fighting. I didn’t start writing again seriously until right after high school, when I was pursuing a career as an actor and decided to write my own screenplay to star in, as Stallone did with Rocky. I started knocking out short stories as well, just for fun. Ultimately, coming to a place of calling myself a writer was a gradual process that took many years.

In PROGENY, Owen Sterling is a successful author who has just bought a large tract of forest land from a Native tribe. Soon after moving into his new house, he experiences a series of strange events that lead him to believe a family of sasquatches lives close by, and further, that they are potentially quite dangerous. He refuses to let local hunters come anywhere near the property, coming off like an aloof, wealthy outsider. Zane Carver, the alpha male of the locals, decides to ignore Owen’s directive, and takes a group of hunters, including his increasingly rebellious fifteen-year-old son Byron along. Pretty soon, the inevitable happens-hunters and monsters cross paths in a tragic manner, and the result is a game of cat-and-mouse that favors the creatures, forcing Zane and company to seek shelter with their old nemesis Owen.

I’ve always been intrigued by Bigfoot, and I was always trying to come up with a way to write something about the phenomenon, without resorting to the usual band of teens being offed with Bigfoot as a stand-in for a slasher figure. The idea of a three-way struggle appealed to me, as it blurs the lines between “good” and “bad” and makes potential outcome less predictable.

I’m tempted to say “neo-splatterpunk” because I read a lot of stuff from that era. I’m not one of those writers that finds no value in gore (though it can be overdone). I think literal viscera can be used to underscore figurative viscera, and a visceral experience is definitely what I hope to achieve. I am an emotional guy so I write about people in highly emotional states. I believe readers want to care about their protagonists, beyond even whether they will come out all right by the end, but also what it would mean if they didn’t–what that protagonist might potentially leave behind.

PROGENY relates to the three father/son relationships that are highlighted in the story, especially Owen and Zane. Owen, the writer and Zane the hunter both have boys with whom their relationships are not ideal. Both are struggling, in different ways, to bridge that gap, to build some foundation for a long-term relationship as the boys grow, and the night of the siege is the crucible for that.

As a father, it was important to me to address for myself what that means. It’s dedicated to my oldest son Deklan, an exceptional writer in his own right. His mother and I broke up when he was still very young so I haven’t had as much time with him over the years as I would like. The message, I suppose, would be to treasure every moment with your child.

Not so much the horror elements, but some of the clumsy efforts by Owen and Zane to maintain good relationships with their own sons are very much influenced by my own experiences, not just as a father but also as a son. All the characters have pieces of people I know.

I think Poe suffered from depression, as I have from time to time, so the way he used it and created from it is inspiring.

Definitely Vincent Hobbes, because he has bent over backwards to make sure PROGENY and the short stories I’ve submitted for THE ENDLANDS have been top notch. He always has time to help other authors and offer encouragement and I’m very grateful.

Jordan Benoit is the cover artist, and I couldn’t be happier! His work on this and THE ENDLANDS is intriguing, mysterious and captivating. I wish I could take credit for choosing him but he was hired through PROGENY’S publishers, Hobbes End.

Yes, and it’s nothing you haven’t heard before: if you’re driven to write, you should be doing it. If the ideas are pounding at your brain seeking release, then release them, dammit! If you love your man or woman then write about it. If you’re afraid that the words just won’t come when you try to write, then write about that. The more you write, the better you’ll be at it, and the more you’ll want to write. So go! NOW! Do it!

I want to hear from you guys! Love my work or hate it, or find it pointless-let me know. And thanks for the time you set aside to read PROGENY or my short stories or even just this interview. I love having the opportunity to tell you a story! 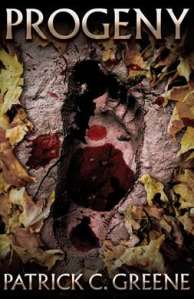