Author L.D. Whitney was born on the plains, but calls the Southwest his home. He believes that adventure is around every corner. Please welcome him to No Wasted Ink.

Well, I suppose I should start with my name. I’m Logan, though I publish under L.D.Whitney. I’m a history teacher in New Mexico, though my first career was as an archeologist. I grew up in Nebraska, but I’ve lived and traveled all over. I’m a big hiker, and try do as much “adventuring” as I can. I also co-host a podcast called “Rogues in the House”, where my fellow rogues and I discuss the Sword & Sorcery genre. I like with my fiance, dog Franklin, and a lionhead rabbit named Hopps.

I’ve always loved reading since and early age, but I am kind of slow about it and need something that keeps my interest. When I couldn’t find it consistently, I just decided to write it myself.

Definitely after my first short story was published. I was still writing my novel, but took a break to do a few short stories. I felt that if someone was willing to pay me for my writing, I could consider myself a writer. Now have got about half a dozen floating shorts out there.

“Remnant” is my first novel, and the brainchild of many of my interests. I wanted to write something that combined exotic adventure and the good old-fashioned creature feature. Throw in a bit of Tarzan and a bit of Indiana Jones, and you’ve got “Remnant”.

I was watching the Ray Harryhausen film “The Golden Voyage of Sinbad”, actually. Near the end of the film Centaur and a Griffin duke it out. I knew wanted to write something where two creatures had an epic fight.

I describe myself as a “Pulp Author”. I write in a style very much inspired by Robert E. Howard, and H. P. Lovecraft.

The title was originally “Existence” though when my book was picked up by Primal Publishing, we decided on “Remnant” as it better reflected its place as a Prehistoric Thriller.

Oh man. I guess of I had to have a message, it would be “the natural world is a precious resource”. Despite much of the danger stemming from nature, the protagonists are conservationists at heart.

Haha! I wish! No, no they are not. Id like to say they are based a little on me, but that might be stretching it.

Oh man, that’s tough! A lot of my favorite authors are from the early 1900s and as such, have views and opinions I don’t really aspire to, despite my love of their fiction. What really inspires me about the Pulp Era was the imagination displayed by these people who were writing to basically meet deadlines and sell stories for one cent a word or whatever. Took a lot of hard work and dedication to craft k out fiction like that.

I wouldn’t really say I have a mentor, though Matt, one of my podcast co-hosts is also a writer and I kind of consider him a friendly rival in a way. His success really kicked me in the butt to work hard on my writing.

The illustrator, Stephen Moore, was actually picked by the lead editor at Primal Publishing. He is a really talented Paleo-artist specializes in Prehistoric animals, so someone familiar with that kind of thing was a natural choice.

For novels, write what you want to read. That’s important in getting you to the end. For short stories, read the submission guidelines and the read them again! Stick to word counts, and sub styles. And write to the market. Don’t just submit something you haven’t sold already. Create something fresh specifically for the publication in question.

Go out there and find adventure. 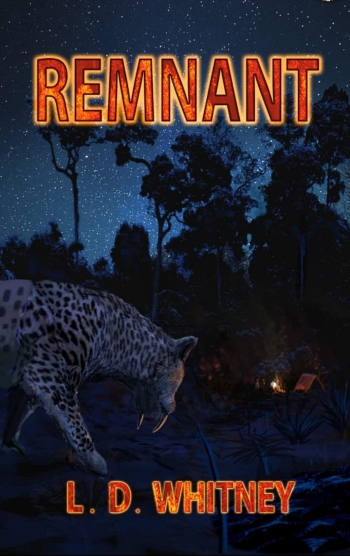